Lipids are transported in lipoproteins throughout the circulation due to the fact that lipids are insoluble in the aqueous medium of blood. All lipoproteins contain the basic five components. 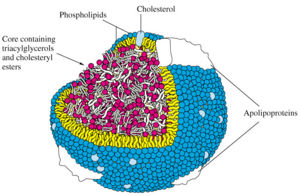 There are five different classes of lipoproteins, separated by composition, diameter, density and sources. 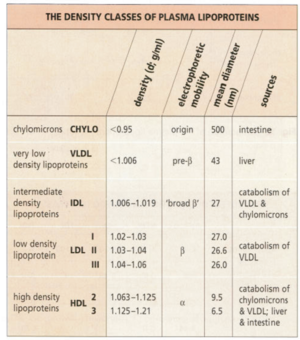 Several enzymes are required to maintain homeostasis of blood cholesterol levels and ensure that cells receive enough cholesterol to survive. The following are key enzymes that are help to maintain the level of cholesterol in the plamsa.

Through experiments done on fibroblasts and patients with hypercholesterolemia, the mechanism of receptor-mediated endocytosis was elucidated. Cholesterol is an essential component of the plasma membrane and is necessary for cell survival. The cell has devised unique ways of maintaining the homeostasis of intracellular cholesterol by the two ways mentioned earlier, the de novo pathway where cholesterol is produced from the ubiquitous precursor molecule acetyl-CoA, and via receptor-mediated endocytosis of LDL particles. LDL particles contain around two-thirds of the cholesterol found in human plasma and to use this cholesterol, cells must be able to internalize the particles, take them apart, and hydrolyze the cholesterol esters found inside the lipoprotein.

The LDL receptor itself is synthesized on membrane-bound polyribosomes and glycosylated in the Golgi apparatus. The receptor is inserted into the plasma membrane at random, but localized to areas known as coated pits where the concentration of a protein known as clathrin is found to be high. Although coated pits cover only 2% of the cell surface of the cell, they contain 50-80% of the LDL receptors that are produced.

Once LDL particles attach to the LDL receptor, they are internalized into the cell for processing and degradation. Only LDL particles attached to LDL receptors in clathrin coated pits are internalized. Experiments on a manifestation of familial hypercholesterolemia showed that in one patient with a 6-fold increase in plamsa cholesterol levels compared to normal, receptors were being produced and displayed on the membrane, but no coated pits were being formed and thus endocytosis was not able to occur. Hence, LDL internalization is dependent on the presence of LDL receptors as well as the formation of a clathrin coated pit.

After the LDL particles are internalized, they are moved to the lysosomes where the cholesterol esters are hydrolyzed and the apoproteins are degraded. From experiments blocking the production of LDL receptors at a certain time, it was seen that the cell continued to internalize LDL particles for a very long time after LDL receptor production had been disabled leading to the conclusion that the receptors were recycled from the lysosome to the membrane where they could internalize more cholesterol.

The incoming cholesterol from the internalization and degradation of LDL particles from the blood plasma are also seen to turn off synthesis of the LDL receptor, preventing further entry of LDL and protecting the cells against overaccumulation of cholesterol. However, different types of cells produce lower or higher affinity LDL receptors depending upon the cholesterol need of the cell or organ. For example, the adrenal glands were shown to have a very high number high affinity of LDL receptors, especially in the adrenal cortex, correlating with the fact that the adrenal cortex is responsible for the production of steroid hormones. The other binding site with similarly high affinity was the ovarian corpus luteum, which is also responsible for a high production of steroid hormones.

HDL Particles are secreted by the intestine and liver as a pre-B1 HDL nascent particle and acquires the ApoA-I apoprotein when first produced.

Reverse cholesterol transport (RCT), or the action of by which excess cholesterol from the extrahepatic cell is transported to the liver and other organs, consists of 5 steps:

The small lipid-poor particles are the initial acceptors of cellular choelsterol. Once they accumulate these cholesterol, they become known as pre-B2 HDL and are a substrate for LCAT which esterifies the cholesterol within the lipoprotein and acquires additional apoA-I molecules leading to the formation of α3 HDL particles. These α3 obtain more cholesterol from the cells and other HDL particles transforming them into much larger α2 and α1 HDL particles. These larger particles undergo exchange of cholesterol esters for triglycerides through CETP, transfer of phospholipid and hydrolysis of triglyceride and phospholipid to by hepatic lipase (HL). These particles are remodelled into smaller α3 HDL and lipid-free apoA-I, with the particle becoming relipidated by cellular phospholipid and cholesterol to form pre-B1 HDL particles again. From the model above, it is thought that the rate of formation pf pre-B1 HDL might be critical for the functioning of RCT.

HDL-uptake by cells is thought to occur through receptor-mediated endocytosis similar to LDL. The receptors implicated in the uptake and degradation of HDL are most likely scavenger receptor type BI (SRBI) in the liver and cubilin-megalin pair in the kidney. Modest overexpression of SRBI in the liver is known to increase cholesterol secretion in the liver and very low HDL levels conferring atheroprotection. From this clinical observatio, it was inferred that there was an increased uptake of HDL by the liver corresponding to a decreased concentration in the plasma. A higher cholesterol flux through the RCT was also inferred. However, high overexpression of SRBI was seen to be pro-atherogenic reflecting a complex relatinoship between SRBI, atherogenesis, and HDL levels. It is further thought that SRBI may be involved in cholesterol efflux, the first step of RCT complicating the pathway further.