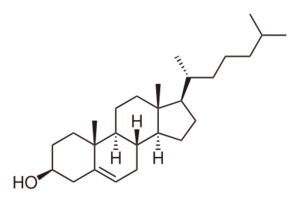 Cholesterol is a 27 carbon compound derived from acetate. Acetyl-CoA, the precursor to all sterol molecules, is first converted to hydroxymethylglutaryl-CoA (HMG-CoA) by the action of two enzymes, thiolate and HMG-CoA synthase. HMG-CoA is then converted to mevalonate, another major intermediate in the cholesterol biosynthesis pathway, by the action of HMG-CoA reductase, the rate limiting step of cholesterol synthesis. Through a series of other intermediates, mevalonate (a 6 carbon compound) is converted to cholesterol, ubiquinone, dolichol, geranyl-geranylated proteins, and farnesylated proteins. [3] Most of the cholesterol present in the body is synthesized de novo in hepatocytes rather than absorbed from the diet.

The importance of HMG-CoA reductase as the rate-limiting enzyme in cholesterol biosynthesis is highlighted by the action of statins, the major drug used to treat hypercholesterolemia (a disease characterized by the elevation of blood cholesterol levels). [4] High cholesterol levels, although not hamrful itself, has been correlated with the incidence of heart diesease, the number one cause of death in the United States accounting for almost 30% of deaths annually. [5] 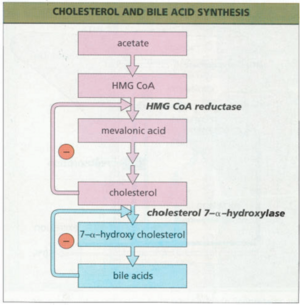 Cholesterol also is the precursor of steroid hormones and bile acids. The most important pathway for the excretion of cholesterol in mammals is the formation of bile acids (also known as bile salts). Cholic acid and chenodeoxycholic acid, the two major bile salts are produced in the liver and stored in the gallbladder before being excreted into the small intestine where they act as emulsifying agents in the digestion of fats and fat soluble vitamins. The bile acids normally reenters the blood stream and returns to the liver for recycling. However, this is the only method by which cholesterol is excreted from the human body. (Voet & Voet Biochemistry, 2nd ed) Bile acids are the main metabolite of cholesterol and the rate limiting step is governed by the enzyme Cholesterol 7-α-hydroxylase which converts cholesterol to 7-α-hydroxy cholesterol before further metabolism to bile acids. (Feher & Richmond Lipids and Lipid Disorders, 1997)