We first start off with a diagram of the model that we wish to use for the bile acid biosyntheis pathway. 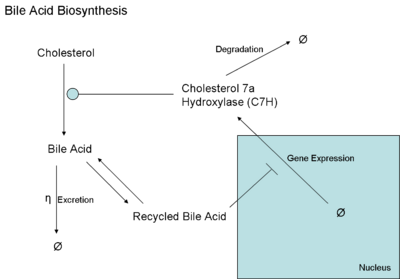 In hepatocytes, cholesterol is converted to bile acids to be excreted into the intestine via the action of the enzyme cholesterol 7α hydroxylase (CYP7A1, C7H for short). The bile acid is excreted and stored in the gall bladder and is pooled until hormonal changes within the body signal to contract and excrete the bile acid into the gut during feeding. Bile acids are key to increasing the solubility of ingested lipids. Approximately 95% of the bile acids are returned to the circulation through the ileum (termed enterohepatic circulation). The returned bile acids then inhibit the gene expression of C7H through a complex unknown pathway, but modeled simply as a direct inhibitor as seen below. The returned bile acids are returned to the bile acid pool in the hepatocytes with a certain rate constant.

The equation governing the enzymatic degradation of cholesterol by the enzyme Cholesterol 7α Hydroxylase (C7H) is modeled using a simple Michaelis-Menten type equation as shown below. This equation will be combined with that from the de novo synthesis pathway to complete our hepatocyte model.

The equation for the synthesis of bile acids follows from the degradation of cholesterol assuming that in this model cholesterol is only degraded to bile acid.

And finally, the equation relating to the returned bile acids is shown below.

Furthermore, we also assume that the concentration of C7H is not constant and will vary over time defined by the equation above governing production of C7H. Although the derivation of the Michaelis-Menten equation assumed that the concentration of enzyme was kept constant, we assume that the steady state value of the enzyme will be reached before any significant changes in the level of enzyme. This is supported by the fact that there is a delay of approximately 40 minutes between regulation of gene expression and the presence or reduction of protein in the cell.

We currently assume that the only degradation by cholesterol is through bile acids, but we will couple the cholesterol governing equation with the same from the de novo synthesis pathway and from the lipoprotein pathway. By separating each component, we can compartmentalize and have modularity of the model.

Unlike the conversion of HMG-CoA to cholesterol, we cannot assume that the enzyme will be rate limiting. Although studies that have probed the kinetic parameters of C7H have assumed cholesterol levels that are much higher than enzyme levels, in our model, there is a dynamical equilibrium set up between the amount of cholesterol in the cell and the amount converted to bile acids.

A complex pathway is required for the return of bile acids from the ileum to the liver through chylomicrons and portal vein circulation. Unfortunately, the exact mechanism for this return is unknown [2] and we just assume a linear relationship between the rate of return and the amount of bile acid present in the intercellular bile acid pool. Furthermore, we also assume a linear relationship in the rate of conversion from the recycled bile acid pool to the intercellular bile acid pool, since literature review has not given us any significant insight into this metabolic pathway in hepatocytes.

We have also assumed that only the returned bile acid pool regulates the gene expression of C7H. In fact, there is a complex negative feedback through multiple nuclear hormone receptors from the returned bile acid which regulates the production of transcription factors that regulate the transcription of the genes required for bile acid synthesis. [2] As usual for modeling, we are neglecting these complications and simplifying our model as much as possible yet attempting to maintain the key biochemical elements involved.

Solving for the steady state concentration of returned bile acids, we obtain:

We then assume that the concentration of the enzyme will be at steady state such that:

Solving for the steady state concentration of C7H, we obtain:

Substituting our expression for the steady state concentration of the recycled bile acids:

Because we have assumed that the concentration of recycled bile acids is constant, our equation for the rate of change of bile acids is also simplified.

And our final equations governing both cholesterol levels and bile acid levels are shown below.

Justification of the Genetic Regulatory Term for the Production of C7H

We use the following network to justify the inverse regulatory component from the recycled bile acids inhibits the production of C7H:

Similar to what was done with the genetic regulation of the production of HMGR, we can come up with the following equations to describe the genetic system at work.

The parameters of the this model are defined below with relevant values found in literature:

We again assume that the mRNA will be at steady state:

So that we can come up with the fixed point and substitute into the C7H equation:

Comparing this with the above equation for C7H, we can see some equivalents to the equation which will help us to determine the value of the parameters that we are using. For the equations above, we assume that the Hill cooperativity constant n = 1, as we assume that only one molecule of bile acid will be sufficient to repress transcription of the genes required to express C7H.

Bile Acid resins are another method by which physicians have helped to lower the plasma cholesterol levels. They are taken orally and work by binding the bile acids so that they are not taken up again in the ileum. This results in a lower amount of recycled bile acid which will in turn increase the production of C7H, and hence increase the conversion of cholesterol to bile acid, lowering the cholesterol levels. The effect on LDL levels is seen when considering the entire model when lipoprotein cholesterol contribution is taken into account.

Modeling this effect is relatively easy, and we assume an inverse proportion of resins to the amount that of bile acid that is not recycled. We take this into account by slightly modifying the model such that instead of η, we now use:

Here, k6 is the binding rate of the resin to the bile acids and the entire term will replace η in all of our equations as shown below.

The human bile acid salt pool circulates 6 to 10 times per day with a daily excretion of approximately 20-40 g. However, only 0.5 g of bile salts are lost through fecal excretion each day of an average individual.[6]