Purpose: For this lab, Transect 4 was studied thoroughly. This was done to find biotic and abiotic factors of the area. The data was recording through pictures and drawings. A sample that represented the area was collected at the end.

Materials and Methods: For the experiment, the transect was first observed. Pictures were taken. Living and nonliving things were all recorded. The area was searched all over. A sample of lake water and soil was taken in a plastic bag. This sample from the transect was later used to record the microorganisms living in the transect.

Data and Observations: Transect 4 was observed. Five abiotic factors include rocks, statues, water, netting, trash. Five biotic factors include squirrels, flowers, trees, grass, and microorganisms. The area itself was a soil and rock based ground with patches of grass. There was a lake in the middle which was covered by the netting and frozen over. A picture is shown below.

Conclusions and Future Directions: From this data and what was observed, it can be concluded that transects have both biotic and abiotic parts to them. This information can be used while observing other transects.

Materials and Methods: The unknown microorganisms were studied under the microscope for practice. Each one found was identified by comparing it to known ones seen under other microscopes. Microorganisms were collected from a sample from the bottom and top of the sample collected from Transect 4 in the previous lab. A dilution was made from four test tubes where the sample was taken out a certain amount then added to the next test tube. Each test tube sample was recorded and added to an agar plate. Four control agar plates were also used to compare.

Conclusions and Future Directions: From the data observed, it can be concluded that microorganisms were found in Transect 4. The type found in the sample was potentially identified as. The dilutions and results will be checked next lab. 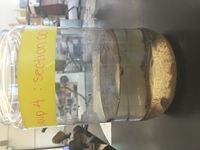 Purpose: For this lab, the agar plates from the previous week were collected and studied. The colonies, color, and smell of the bacterial growth was recorded. Samples were taken from the most populous plates and studied under the microscope.

Materials and Methods: First the agar plates that were stored in the room were collected. To study the plates and bacteria, the colonies were counted. After, the plates that had the most growth were used for the research. The first looked at under the microscope was made through a wet mount procedure, where the loop was burned to be sanitized then used to retrieve a sample. It was then mixed with a drop of water on a mound, and then a cover slip on top. The data recorded was looked at by using the gram stain procedure. The loops were sterilized again. The process was the same as the wet mount slide where the sample was collected, however dyes were added to the slides. This was so the bacteria could be stained and easily seen under the microscope.

Conclusions and Further Directions: From the data, it can be concluded that the lower dilutions had more bacterial growth. It probably would have been better to redo some of the gram stains since some of the bacteria got burned in the process. It made it harder to find what was needed under the microscope. 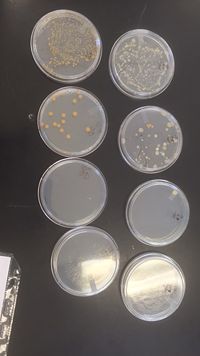 Materials and Methods: The leaf and plant samples were collected from transect 4 again. Once all five were determined by appearance, etc., a piece was taken from each and a slide was prepared. At first, just the leaf sample was placed on the slide. After it being too hard to see under the microscope, a drop of water and cover slip was added to each slide. From this view, the vascularization and specialized structures could be determined. After researching the plants, the extra plants left over were placed into a Berlese funnel to collect invertebrates.

Conclusions and Further Directions: When looking under the microscope at the separate leaf samples, it was hard to tell the vascularization because the details could not be seen. Next time this is done, a different type of microscope should be used. Overall, the hypothesis that biotic factors are in each transect can be concluded as true based on the findings.

Purpose: For this lab, the microorganisms found at the bottom of the Berlese funnel were collected. Each organism was identified, described, and studied under the microscope.

Materials and Methods: First observed were examples of acoelomates, pseudocoelomates, and coelomates. Nematodes were also studied. The five major classes: arachndia, diplopoda, childopoda, insect, and crustacea, were all observed as well. Before looking at the Berlese funnel samples, these five classes were determined. The invertebrates from the Berlese funnel were collected using ethanol. They were moved into a petri dish. The remaining liquid was poured into separate dishes. The organisms were separated using pencils to see each clearly before moving them under the microscope. A dichotomus key was used to identify the organisms found.

Conclusions and Further Directions: From the data, it can be concluded that there are different types of invertebrates that live within transect 4. Not all of them may have been found, but in further research the area could be studied more in depth. Different areas could be collected from. New findings could be found from different parts of the transect. 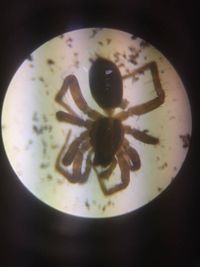 Control: A3 : Still in egg, wrapped around itself, greenish yellow in color, potentially about to hatch, covering eyes with tail, frequently moving in shell.

B2 : Stage 1 of embryogenesis, in the long pec stage. Still on its side no eye movement.

Treatment: D1: Stage 1 of embryogenesis, in the long pec stage. Over 100 um, no eye movement, strong movement, flipped over on belly while under the microscope, fins flapping strong heartbeat.

A3: Still in egg, coiled in egg, yellowish color, eyes forming, two large black spots on either end of the body

Random zebrafish were studied closely under the compound microscope to see what they looked like.

One zebrafish in the treatment container was found to be deformed. There were also unhatched eggs. These were all preserved since the deformed one was actually dead and the egg was not going to hatch. Two control fish must have disintegrated because some wells were empty. Also, one fish was first seen still in the egg, but hatched under observation.

Not much changed from the day before.

The deformed treatment fish did not have a head or heartbeat.

Mold was growing in the wells of the control group fish. Treatment group seemed to be slowing down, feeling the effects of the salinity.

The fish were left over the weekend without food. The treatment fish were barely surviving at this point, the two remaining ones moving very slowly. The control fish may have simply died from lack of food.

D1: Curled in formation, body in the middle of disintegrating B2: Newly dead, extended abdomen, something inside of abdomen.

All of the treatment fish have died. The control fish are still hanging on, but keep disintegrating before they can be preserved.

Only five fish remian in all at this point. The treatment fish were cleaned out and preserved if possible, as well as the control fish that did not disintegrate. This was the last day and last observations.