Ever have the urge to transform cells on a Friday, but know you won't be coming in Saturday? Just wait and do it on Monday!

The two times I transformed cells on Fridays and let my plated cells grow at room temperature over the weekend. Despite having both Amp and Sm antibiotics, the plates were contaminated with several types of bacteria.

Recently tested whether this is an inherent problem in transforming cells at room temperature:

While transforming some plasmids, I also had a control tube of cells (chemically competent Top10) that did not receive plasmid. After plating the control on LB + Amp + Sm plates, I left them on my bench at RT for 3 days. Orange, yellow, & white colonies were observed. 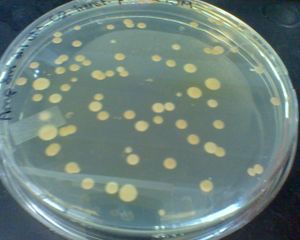 The colonies I transformed at 37oC overnight were perfect, in contrast. So, too, were a different sample of the same batch of competent cells plated overnight on LB at 37oC without antibiotics.