11:19, 29 September 2010 (EDT)
This is a very good primary notebook. Lots of information to make it possible to replicate the work.

Using a BNC cable, I hooked up the output from the BK Precision 4017A Function Generator to the CH1 input on the Textronix 1002 Digital Function Oscilloscope. 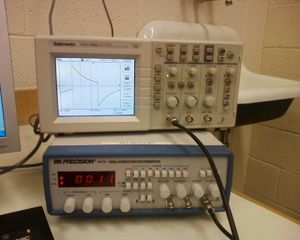 After talking to Katie about the purpose of T connectors and terminators, I did not use any, since they're for open-ended connections. I didn't have to adjust any settings to see my sine wave on the oscilloscope, but I changed my output from square waves to curvy waves for appearance's sake.

Measure characteristics of a sine wave

I set the oscilloscope to 40 Hz, and obtained the following measurements.

11:12, 29 September 2010 (EDT)
This is a very good level of detail for your primary notebook. As for the distorted wave, it was the limit of the function generator, as opposed to limit of the scope.

Triggering allows the user to stop a wave at or above a certain voltage set by the trigger level. Triggering on a rising edge means the specified voltage must be reached by the positively-sloped edge of a wave. Triggering on a falling edge means that the trigger voltage must appear in the negatively-sloped edge. The difference between rising- and falling-edge triggers is only the portion of the wave that is displayed.

I don't know the range on the DC offset dial, so I turned it all the way to the right. DC coupling displays the entire voltage (AC plus DC), and so when a DC offset is employed the wave shifts up or down, making it harder to observe any ripples. AC coupling removes the DC bias (showing on the alternating voltage), keeping the wave from being offset up or down and only displaying any abnormalities caused by changing the DC offset.

I set the function generator to an amplitude of 8.56 V (8.48), displayed a square wave, and switched off the DC offset.

After extensive explanation and demonstration on Professor Koch's part, I finally managed to display the correct wave pattern. 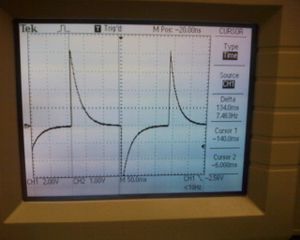 11:17, 29 September 2010 (EDT)
this discrepancy between your cursor measurements and the "measure" function is interesting. You have enough detail in your notes that it's very easy for me to understand what you did and to know that the "measure" function is not the true tau fall time. So, that is exactly what I like to see in a primary notebook. I think the calculations for tau are a bit off...you would understand it easily if we talked about exponential functions. For the bandwidth, you're using the incorrect bandwidth--the inherent low-pass filter of the scope for very high frequencies. For the AC coupling, it's a high pass filter with something like 10 or 20 Hertz cutoff I think.

According to Wikipedia, rise time is proportional to the RC constant: [math]\displaystyle{ t_r\cong 2.197\tau }[/math]

In this lab, I was helped by Katie, Professor Koch, and Cristhian. I used Wikipedia, the oscilloscope manual and Anastasia's lab notebook.