I'm from Spain, more specifically Lanzarote, eastern-most of the Canary Islands a fact which usually attracts some envious sighs and "oh you're so lucky"'s. Believe me, it isn't that amazing. I've just finished the second year of my BSC in Biological Sciences and am looking forward to a summer of something quite different to what I usually do!!! I highly doubt anyone is going to read this anyway so I may as well ramble on (a skill perfected by 2 years of Bio!!!)

Just following the format of the others' personal pages although this feels remarkably like a C.V. Went to a British School in the Canary Islands- Colegio Hispano Britanico (though there was nothing "hispano" about it- British system all the way!!) A small very informal school with under 250 students aged from 3 to 18. You could pretty much choose to study when you wanted and sunbathed when you didn't. First name basis with your teachers ofcourse. A bit unusual compared to secondary schools in England. Charming in its own way but very very small. So I got my I(international)GCSE's and AS/A' levels in Maths, Chemistry, Biology, Spanish language and literature, and English. Pretty standard I think- nothing too exciting.

I would love to say that I play the clarinet, violin and piano to grade 8, in addition to having represented my country in the world synchronised swimming competition whilst on a break from my tour as lead singer of a rock band. However, I can't (truthfully) say any of the above so I have to settle for something a little more mundane. Organ lessons, school newspaper,creative writing, gardening and horseriding were also part of my life at some stage or the other, to varying degrees. I mean, at the age of 12, my entire school gained an obsession with doing handstands and handstand related stunts. I must say I got rather good at it, but does it really count as a hobby?? Oh, I was also a girl guide for a whole year before I got bored and quit.

An obsession with reading anything I could get my hands on (in English only. For some reason I've never enjoyed reading in Spanish) from about the age of 5. My childhood memories are filled with recollections of my mother saying "Deepti, put that book down, 8 hours is enough for today". Record? Think I managed to read 9 books in a day once. I'm a geek, I know. Guess my main hobby though, would be dancing. When I say dancing I don't mean clubbing dancing, I mean flamenco, tap, sevillanas, salsa, funky, hip hop, merengue, acrobatic rock and roll...you name it, I've probably tried it. Bear in mind though, that I stress the word "tried". The dance style I genuinely enjoy and persue more seriously is ballroom dancing- both Latin and Standard though the latter to a lesser extent. I compete in the University circuit on the Imperial college team. Next year I hope to be able to hold my own in both disciplines in the Advanced Category. I hope. 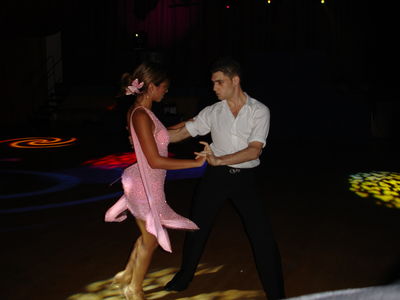