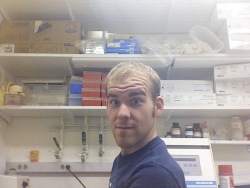 I am a plant biology graduate student in the Harmer Lab at the University of California, Davis. I am currently funded by the Molecular and Cellular Biology Training Grantwhich receives its funding from the National Institutes of Health. Our lab studies the molecular components that comprise the circadian clock in Arabidopsis

BWC is a private, liberal arts college located in Berea, OH. Primarily undergraduate institutions like this are widespread and very popular in Ohio. BWC is especially nice for rising biologists due to the close proximity to the Cleveland Metroparks, allowing students to do on-site field work.

Circadian clocks are widespread in the living world and are thought to confer an adaptive advantage by allowing organisms to properly time daily and seasonal processes so that they occur at the most optimal time. My interests relate to the control of hypocotyl elongation, which is in part controlled by the circadian clock among other factors. Rhythmic growth of the hypocotyl is an early hallmark event in a plant's life as this organ must reach the light if proper growth and development are to continue. I am largely using genetic approaches to determine how a gene called XCT, which is itself involved in the function of the circadian clock, also functions to control hypocotyl elongation.

My first introduction to university research was at Cornell University where I was a part of the Plant Genome Research Project. The PGRP is an NSF funded Research Experience for Undergraduates. I worked in Maria Harrison's lab at The Boyce Thompson Institute for Plant Research. My project focused on characterizing the role of a novel serine/threonine protein kinase in regulating mycorrhization of the legume model plant Medicago truncatula.

Medicago roots are not only a source of symbiosis with various bacteria and fungi, they also exude allelochemicals to inhibit the growth of neighboring plants. At BWC I engaged in an independent research project to learn more about these various allelochemicals, namely a class called triterpene saponins, and determine if their abundance could be controlled. This project involved a technique known as HPLC.

I am originally from Medina, OH, which is located 30 miles south of Cleveland, OH. This region of OH is infamous in part due to the reputation of the snow belt, a small area surrounding Lake Erie that is very snowy. After completing my undergraduate studies I left for sunny Davis, CA for graduate studies.