I discovered on Monday that our PhosFree assay was not to distinguish between Pi concentrations less than about 10 uM apart. So today I decided to try the CytoPhos assay, which is reported to be much more sensitive. I decided to measure around 12 uM, which is approximately one quarter of our background. The idea would be that the kinetics assays would be diluted 1:3 so that our background would be within range of that assay, and hopefully the assay could resolve points about 1uM Pi apart, thus giving us a useful, non-error ridden measurement.

I initially took another look at the malachite green developing time by measuring the absorbance every 30 seconds for 12 minutes, and then every 15 seconds until 20 minutes. I found that at 16 minutes the sample was pretty stable and did not have great changes in the absorbance after that point.

A problem that I had noticed on Monday was that if one were to measure a sample multiple times in a short period of time (under 30 seconds), I saw a range of absorbance values, pointing to there being some precision issues with the NanoDrop. So for all of the cuvettes I measured, I made 10 measurements within 45 seconds. I did not see any trend pointing towards increasing values while doing these measurements, so I can safely say that the malachite green developing is not a source of error here. 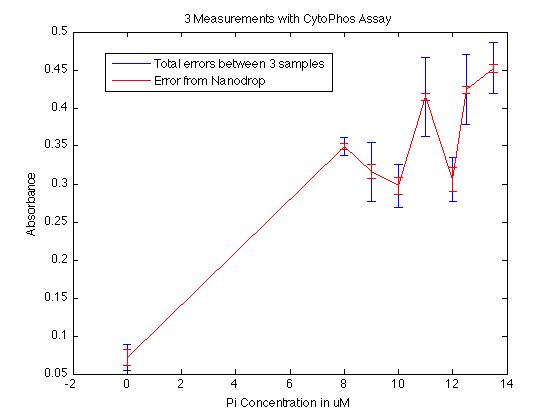 For each cuvette, however, I did see a range of values just from making quick multiple measurements. The average error was .006 (absorbance) with the maximum being .01 (pretty significant). There also appeared to be no correlation between Pi concentration (higher absorbance values) and these measurement errors, which shows that this is just some inherent flaw in the readings at this wavelength. While this seems like a problem, it can be easily resolved by making several measurements in secession and finding the average, which is easy enough. These errors are displayed as the red error bars in the graph above.

The BIG problem I ran into was differences between samples at the same concentration. I found a massive range of values between cuvettes with nearly identical concentrations. The three samples at 11 uM covered a range of .075, which is about 17% of the average value at this point. This error is so large that almost all concentrations, even those 5 uM apart, are indistinguishable from one another (note, 5 uM is about one third of the useful range of the assay). 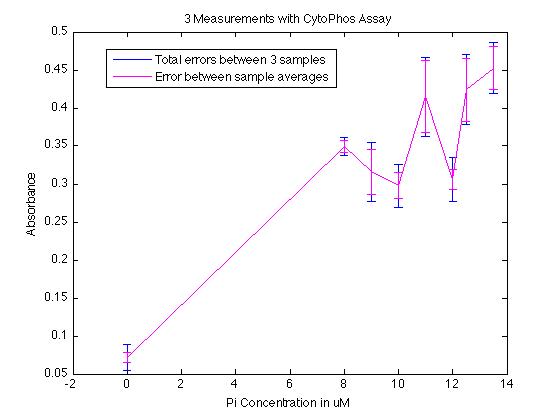 In the graph above, the line is the average of all measurements of all samples. The blue error bars show the total error associated with each point on the graph (errors from the nanodrop readings plus the difference between the average values of the three samples). The magenta bars show the errors between the average values of the three cuvettes. It is fairly clear here that the magenta bars account for a vast majority of all of the blue bars, so obviously this is our main source of error.

It is extremely troubling that there is such incredible variation between the samples. I would expect there to be some from pipette errors (< 5%), but not this much. There are three possible causes that I can think of for this

Andy mentioned to me that the cuvettes could be playing a part in the errors we see between samples. I made a few really quick measurements of 10 cuvettes and found that they were well within range of eachother (about .007 off at the most, which is within range of the NanoDrop measurement errors described above). Measuring a blank cuvette multiple times also confirmed that the NanoDrop will give a range of readings for the same sample. I saw that for the same cuvette, the NanoDrop gave a reading between .078 to .084. So in the future it should be best to do multiple readings of any sample for the most accurate measurement.