Thus far, All measurements I have made have been made by using the cuvette aspect of the Nanodrop. So I decided that it was about time to give the pedestal a whirl and see how it measured up.

Since the pedestal only requires between a 1-2 uL sample volume, this makes this method very efficient as it requires far fewer chemicals and materials. I made 10 50 uL reactions by adding 15 uL of 0.1mM phosphate Standard + H2O and 35 uL of reagent.

I let then added 35 uM of reagent solution to each aliquot and letting the solution develop for 16 minutes. I pipetted 2 uL of the solution onto the pedestal and made measurements at 640, 645, 650, 655, and 660 nanometers. I used a pathlength for the measurements of 1 mm (the standard set by the instrument). After each measurement I wiped the bottom and top part of the pedestal with a kimwipe so it was clean for the next sample.

There were several problems I faced using the pedestal. The first of which was initially mixing the reagent into the phosphate. Since the aliquots are so small at the bottom, the pressure did not allow them to be shaken in order to mix. I mixed the solutions a little with the pipette, but when I made measurements, they seemed oddly inconsistent. I then mixed them really really well, and there was a visible color change nearly instantly. I then tried to measure them again.

The second problem was figuring out what the "auto pathlength" function on the software controller was. I made all of the samples and realized that the measurements I was getting were just horribly wrong. Apparently the "auto pathlength" option should be used for "high concentration protein samples" (from the NanoDrop user manual). I of course did not read this, or even think to look at what it meant before making measurements. Apparently, it adjusts the pathlength to give a lower absorbance (ie, high concentrations), which for the concentrations I was dealing with, were much much too low.

After realizing this, I tried to make the measurements with the same samples, that had been sitting for about 45 minutes before they got measured a second time. Again, the numbers were really off. I noticed that in a few of the higher concentration samples ( 40 uM and over), there was fallout in the sample. I tried mixing them back by using a pipette, however much of it would not go back into solution. I realized here that since I was using the CytoPhos assay, which is more sensitive to phosphate concentration, that fallout will occur at lower concentrations that with the PhosFree (which occurred around 500 uM).

So, with that batch gone, I made another (same concentrations, numbers and times). This time, I used the vortex to mix the malachite green into the sample initially, at 5 minutes after the reagent had been added, and then again about a minute before being measured. This time, everything seemed to go well.

I got the following standard curve. 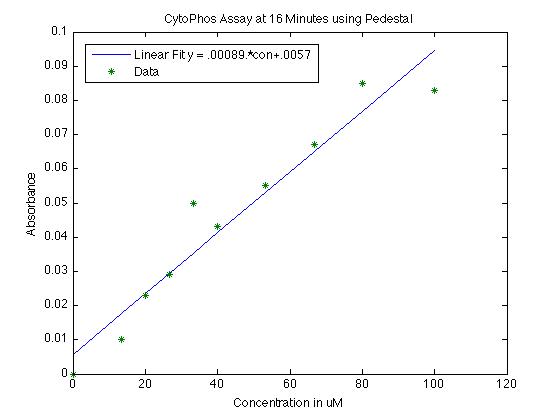 Notice the remarkably low values for the absorbances. In fact, the user manual for the Nanodrop states that the pedestal is accurate down to absorbances down to 0.02. So with no value being larger than 0.09, this is a little worrying. This means that with a measurement error of 0.02, this could mean twice as much phosphate in a solution as there actually is! Also, when looking at the graphs from the two standard curves, the data for the cuvette measurements follows the linear fit much more closely than the pedestal measurements, so obviously there is some additional error when using the pedestal. 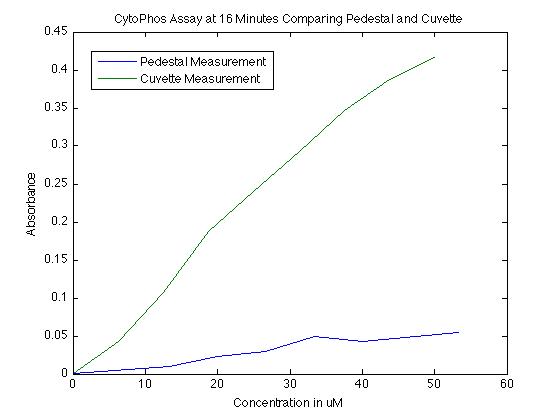 I am not quite sure what this means. It could mean that the cuvette actually does measure things at 10 times higher values than the pedestal, or there could be another factor that I am missing. Since I preformed making the samples twice (and while hte first few tries didn't work well, I was not getting values 10 times higher), it seems unlikely that it was a measurement error on my part. It does occur to me on the spot right now that it could be related to the pathlength of the light. For cuvette measurements the pathlength is set to 10 mm (the length of the cuvette), while for the cuvette it is 1mm. This is all I can think of at the moment that could give exactly a factor of 10 difference. However, once the numbers are multiplied by ten, the plots seem nearly identical!

Steve Koch 10:50, 12 September 2009 (EDT): The factor of 10 really does make it seem that it's a pathlength conversion. I would have expected the machine to convert the absorbance value to an equivalent 1 cm value, to make it comparable to the cuvette measurement. Beer-Lambert law shows that it will be proportional to path length of course. People usually just report absorbance as unitless log value and don't report the pathlength, because it's usually 1 cm (at least in my experience). Well, I think we should be able to figure it out using the manual and help of the software. You and Ant could use some DNA standard to compare cuvette versus pedestal perhaps. Or maybe just some other dye that doesn't precipitate as much (and colored water solution) -- that'd be better, since we don't have a good UV cuvette yet. So, as you state above, maybe with the short path length, it's too close to the noise level...so it'd be better to use higher Pi concentration for pedestal?