Transect 3 was located in an outdoor garden space in between Bender Sports Arena, Hughes Hall, and the campus amphitheater. This transect was concluded to be a man made habitat, consisting of forestry, shrubbery, and designated areas for seating so that the space could be enjoyed by students. The biotic factors observed in transect 3 were gnats, berries, squirrels, birds, and trees, while the abiotic factors were rocks, cigarettes, candy wrappers, bench, and many lampposts.

Colony Morphology: from each sample, tet positive and negative, yellow and white, the most recognizable bacteria had were small coccus shaped formations, especially for the white tet positive slide, which presented hundreds of very tiny coccus shaped bacteria

Initial Hay Infusion Observations The Hay Infusion for Transect 3 had a distinct odor of manure, decay and stagnate water - almost swamp-like. Since the water had been still for about a week there were few dirt particles suspended, instead most of the dirt had collected into the base of the jar, leaving the yet to be stirred product relatively translucent. The water line had receded indicting that evaporation occurred. There was a thin layer of film/growth that had formed on the water's surface. In addition, around the edges of the jar, but on the water's surface, spots of light grey-green mold had begun to grow as well. The Infusion also consisted of plant matter (a branch with a few leaves), and a piece of rotted bench wood. Growth seemed to favor the niches closest to the plant matter, however, there had been some initial algae growth that remained on the bench. Samples were drawn from these niches and from the mid section of jar, consisting primarily of freely suspended dirt particles. 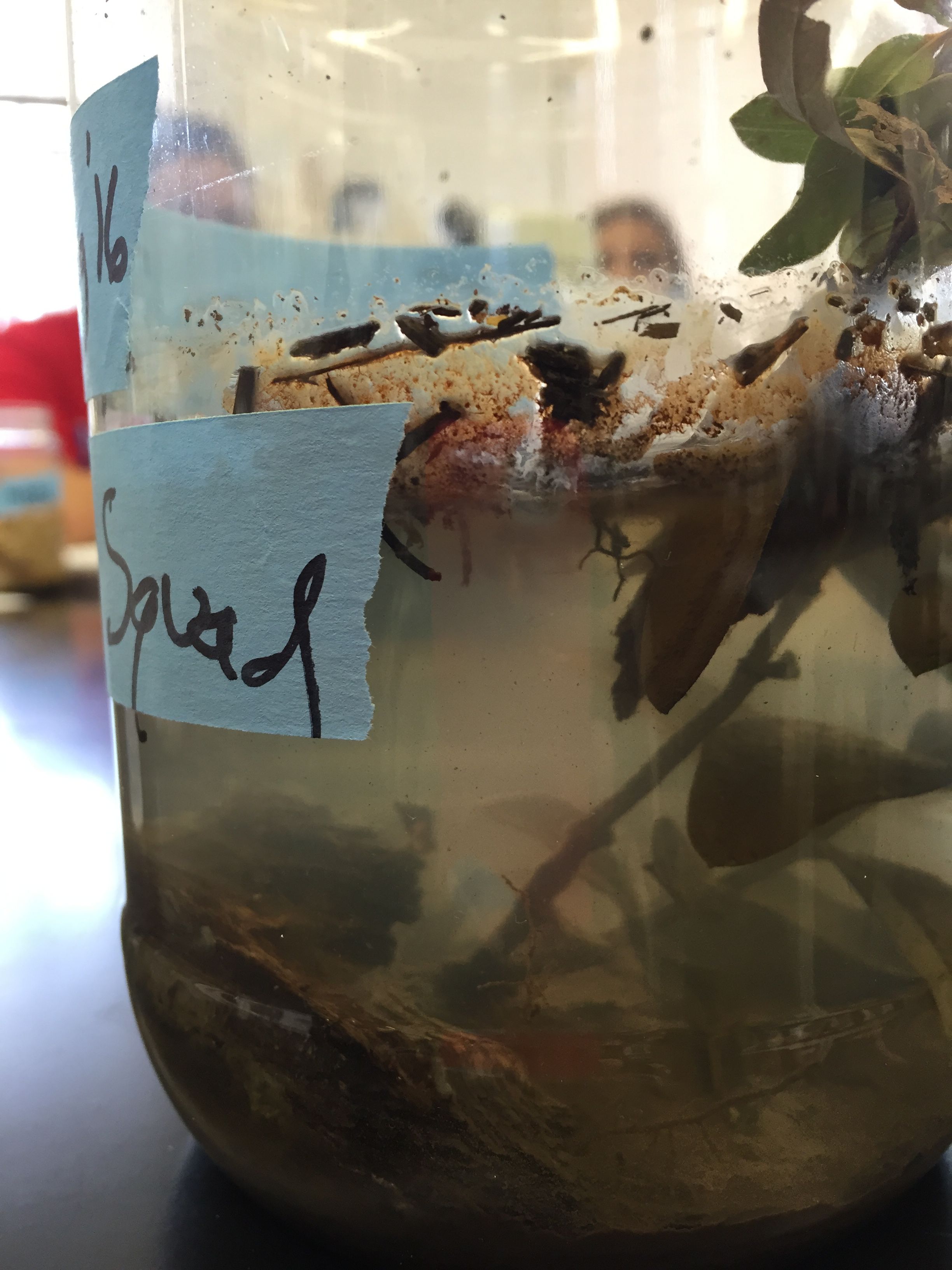 Protist Identification Overall, 3 of 4 samples taken provided produced identifiable organisms. The following organisms identified within the Hay infusion were Euglena, Gonium, Chilomonas, Euglena, and Actinosphaerium. The first sample was taken was from the thin layer of film on the surface of our hay infusion. From this sample we observed small green colored organisms, these organisms had accumulated into a small colony of about 16, indicating that we had found Gonium protists.This sample also contained singular, motile cells, motion of these cells had been achieved through the use of one flagella. In addition these cells were green-brown in color, making them Euglena protists. Our second sample was collected from the center of the jar, which consisted mainly of suspended dirt particles. This sample contained organisms that had collected in relatively large colonies that were brownish in color, when more closely observed it was clear that these organisms were elongated and narrow in shape, indicating that these protists were Chilomonas. The final sample was collected from underneath a section of plant life that had been submerged in the solution. This sample revealed organisms that were colorless and floating with no recognizable motion, according to the dichotomous key these were Actinosphaerium. While Actinosphaerium were described to have radiating spines, these spines were not visible because the microscope was not zoomed into the cells enough. 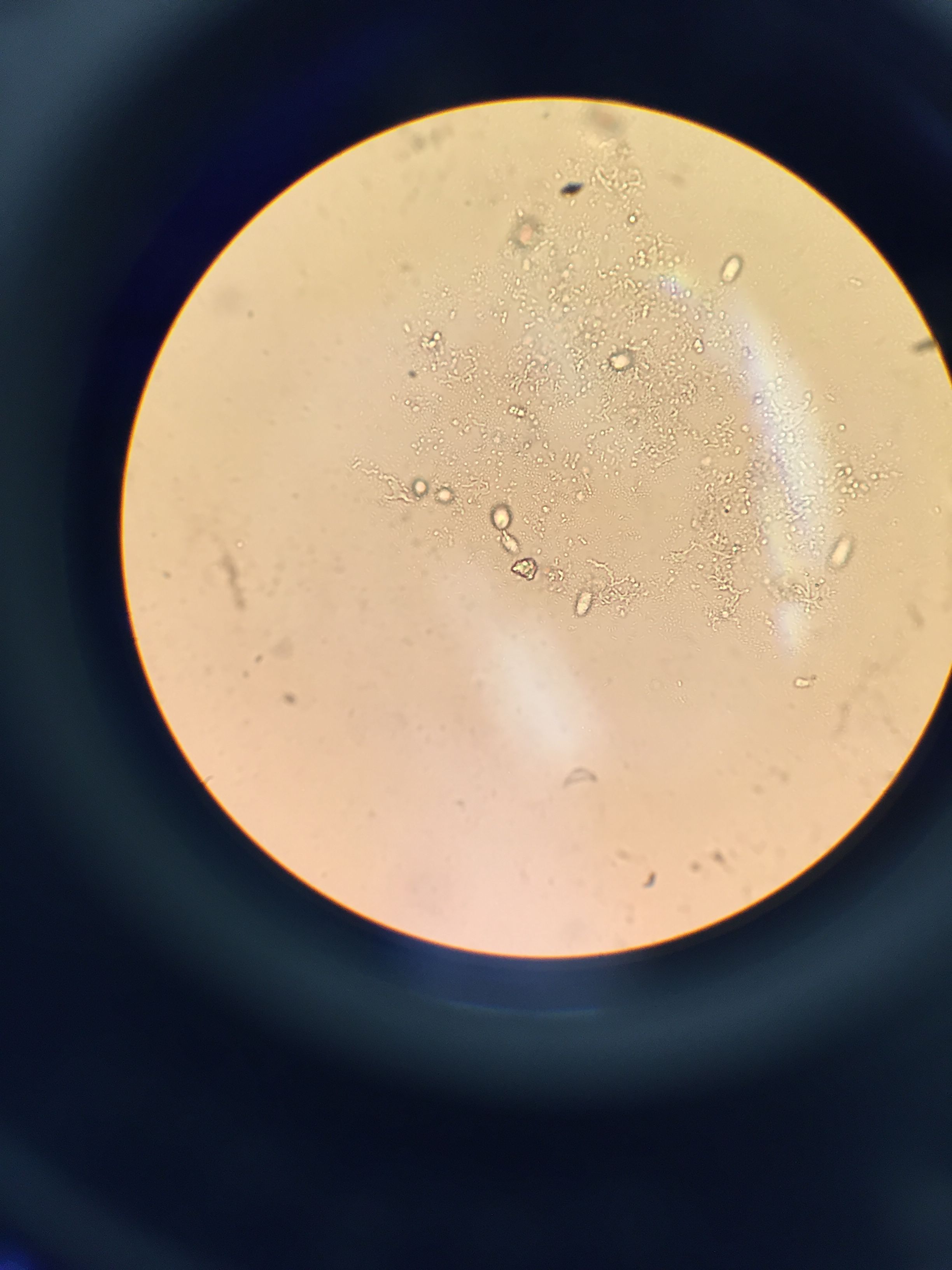 The images above depict Gonium, protists that are notable for their greenish in color, and their formation colonies of about 16. 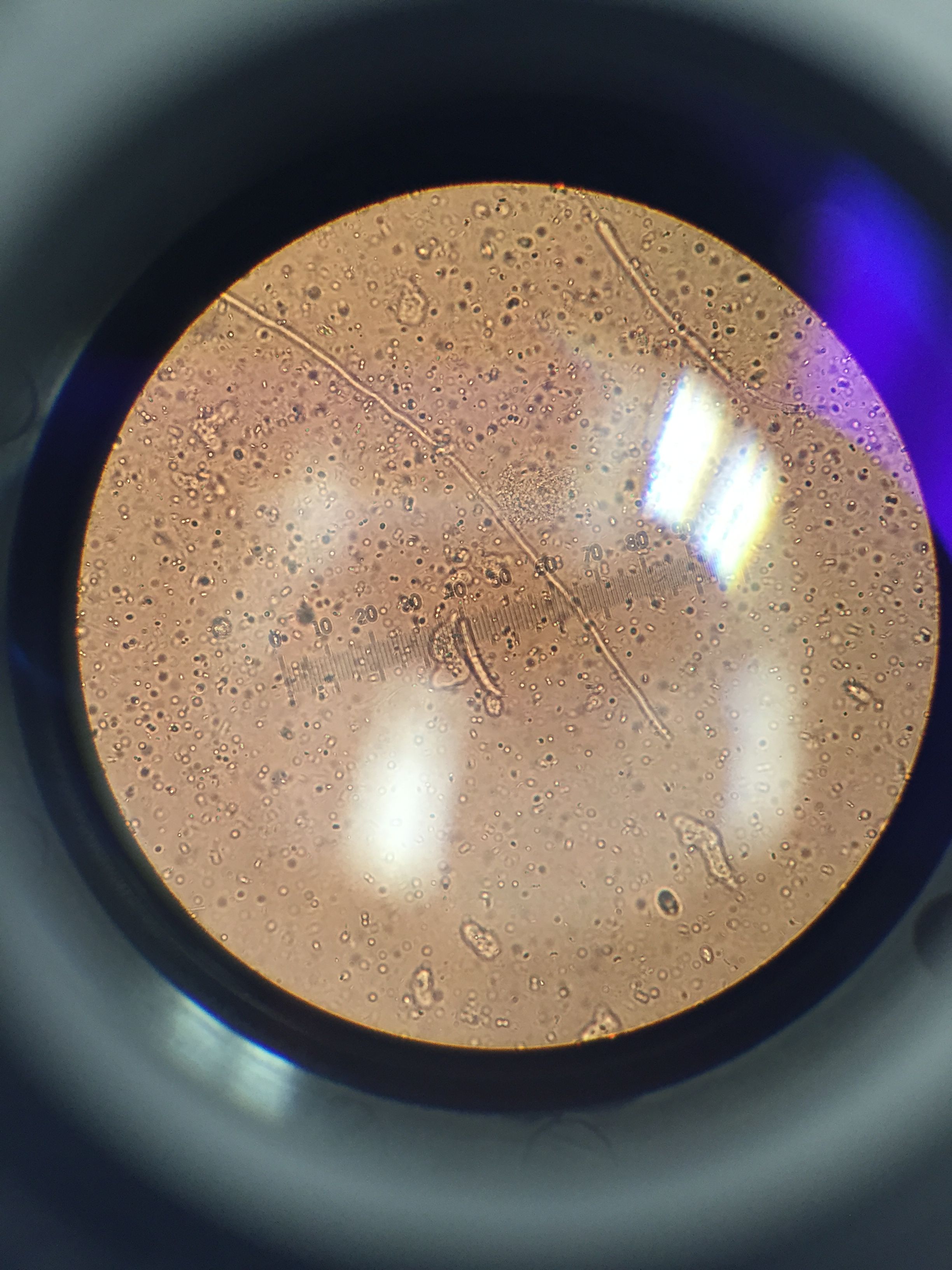 Conclusions Out of all the organisms identified, the Euglena was the only cell found to be photosynthesizing. The Euglena found were green-brown in color, implying that the cells contained chloroplasts, organelles that enable the process of photosynthesis. [meets needs for ] At the conclusion of the lab, small water samples of 100μL were taken from the Hay Infusion Culture to create a serial dilution. The dilution progressed from 10^-2 of the water sample by increments of two to 10^-8. 100μL of each increment of the dilution was then added to an nutrient agar plate and and agar plate containing an antibiotic known as tetracycline. 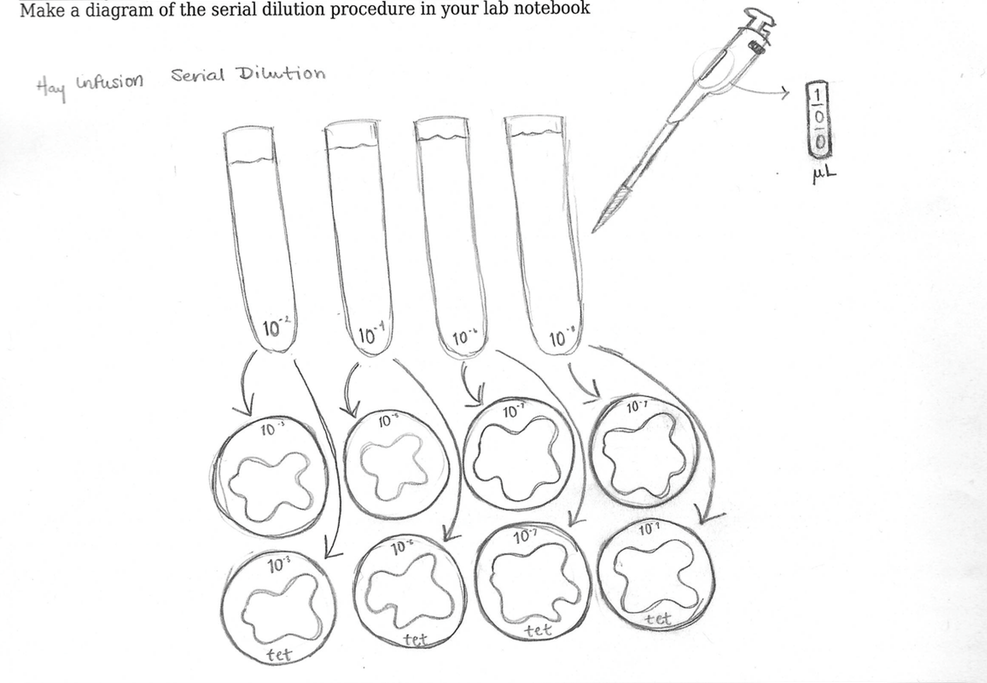 From a final observation of our Hay Infusion we determined that there was more evaporation, as well as growth of a thicker film on top and more mold underneath the surface of the film. Additionally, a stronger swamp-like odor was present and the leaves in the infusion lost their color. 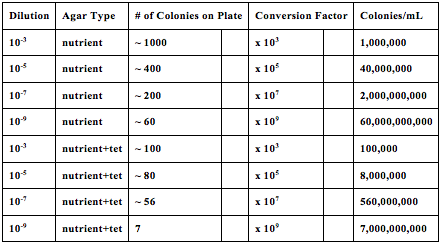 The tet-positive plates had orange yellow colonies that are fewer in number. The colonies were also convex and umbonate in shape. The tet-negative plates had smaller white colonies that were much greater in number, and less uniform in formation. These white colonies also appeared to be raised from the agar plate surface. Lastly, condensation had formed in these plates unlike their tet-positive counterparts. As an antibiotic, tetracycline is expected to help reduce competition for nutrients and other resources. It is composed of molecules that are purposed to either stop bacteria from growing or kill them off. Ultimately the plates with tetracycline produced less bacteria than the plates that did not contain tetracycline, supporting this hypothesis. Concerning Colony Morphology from each sample, both tet-positive and negative, the most recognizable bacteria had small coccus shaped formations. The white tet-positive slides in particular presented hundreds of very tiny coccus shaped bacteria. Overall, the bacteria cells found were so small and all coccus in shape the motility determined was overall immobile, none of the bacteria from the samples had any observed movement.

From the branch of a bush,

From a stem of yellow grass,

-fibrous seeds from a singular stem

From a branch of low-lying green plants which covered the ground,

From a stem of the yellow grass growing alone next to the bush,

-many stems from the origin, many seeds growing on each branch, seeds seem very light especially compared to the other grass

5.) Unknown (unable to be identified) 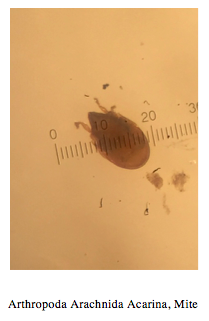 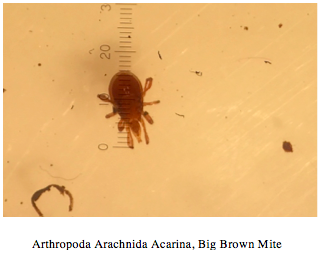 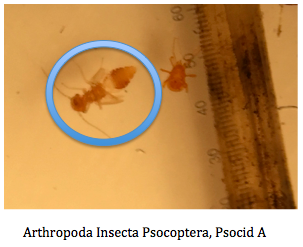 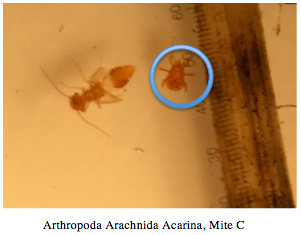 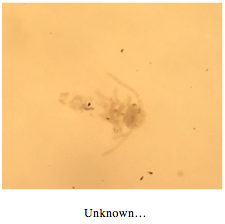 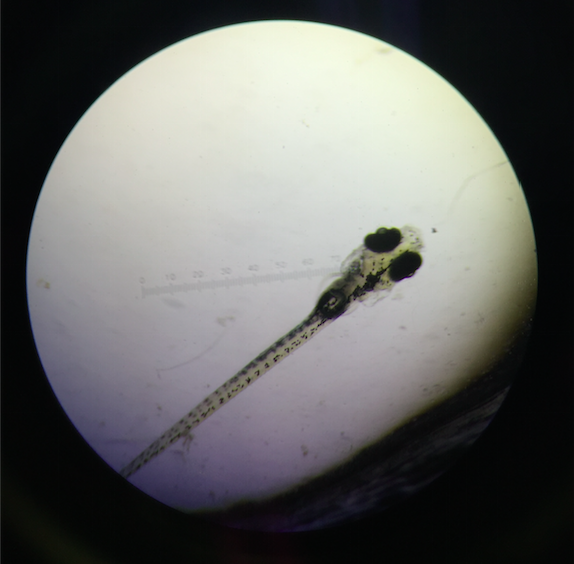 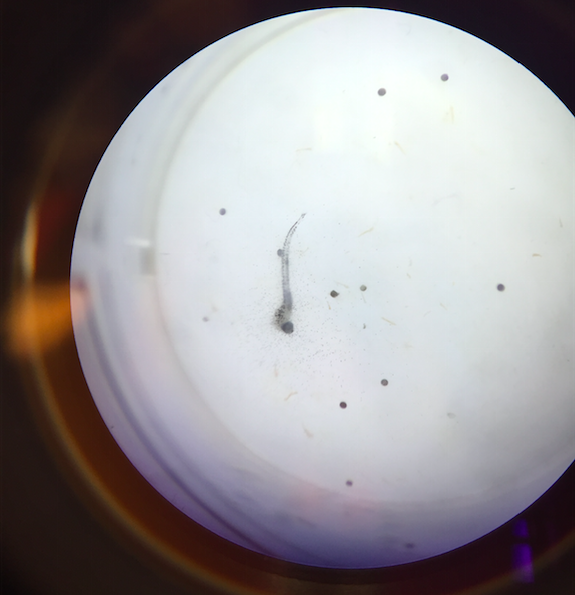 B2 - unable to be observed, very active; kept swimming into wall. It was assumed to be because the fish was avoiding the light source from the microscope. Once light was lowered the fish was viewable for a brief period of time. However view was unclear and light was turned back on: the fish immediately swam away and continued to swim into wall.

A1 - dead. body is translucent, and in process of decomposition, dark colored bacteria and fungi swimming around, within and outside of fish carcass.

A1 - dead. no longer under observation

B2 - dead. no longer under observation

Brief, Immediate Conclusion: In comparison to Zebrafish with ethanol exposure, thrival rate of control group is much better. 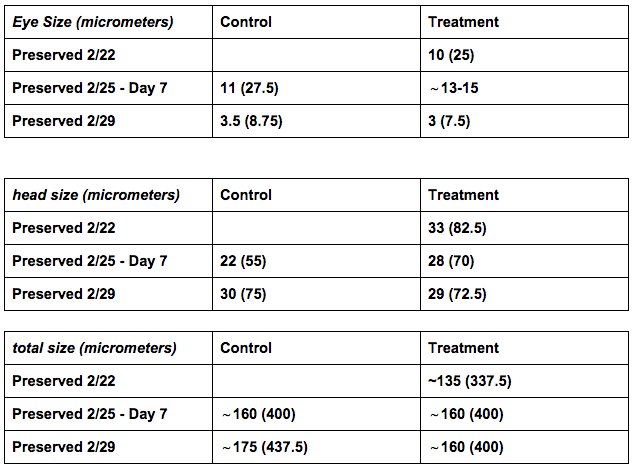