Steve and I had a meeting discussing the recent data I took from the water isotope study. It turns out, I wasn't exchanging enough fluid in the flow cell and we came to the conclusion that the data I took is not viable for the specific study we were interested in.

We did figure out that I could do the entire experiment in a much more compact fashion if I was able to design a flow cell that allows for multiple fluid exchanges during an experiment. This seems like a great idea and may be useful in the future. So, I started to design something that would allow me to exchange fluid in a flow cell. This lead me to the below design. 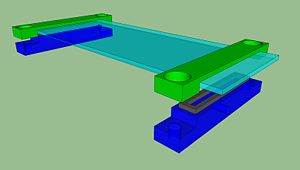 The flow cell is the translucent light blue material. The clamp is the green and dark blue. The clamp mates together and a gasket seals the flow cell of which, a hole is drilled through the plastic to allow for fluid exchange.

While this seems like it may work, I recalled something important that I learned recently. Keep It Simple and Stupid. So, I tried "sealing" the flow cell with teflon tape. This didn't work at all as it left residues and the chamber evaporated.

To try and alleviate the residue problem, I think I may try using some vinyl static electricity stickers.

I did go out and buy some screen protectors for a phone. Those don't work at all. I also tried pallet wrap but, the wrap left a film on the flow cell since it has a small amount of glue on it.

I'm going to try two other things. One is the static cling vinyl and the other is just plain old plastic wrap you get at the store.