So there was an update to the virtualbox I use for Windows 7. I installed and and a ton of crap went wrong. First, Windows 7 wouldn't start. Then I got it to work. Then I tried to install updates and that took an hour. Then I went to turn on my TeTech LabVIEW program and guess what, communication with the serial port failed. So, I had to remind myself of what to do which took a lot of time.

At any rate, I can now get back to my experiments.

Since I know that the mixed casein will work as a passivator right off the bat, I am going to use it as my trial to see if things are still working. If not, then I'll try a whole casein passivation.

This assay really works quite well. I'm not sure if it is because it is made up of 49% alpha casein or not but, it works really well.

Well, this is the last one. I am now observing the kappa casein passivation and it consistently does not support motility. I'm going to do what I did yesterday and take a lot of data of the immobilized microtubules and just try and hunt for ones that are motile.

I am able to find some motile ones but, they are exclusively by the tape where they break up quickly if the ROI is too close to the tape. What I ended up doing was taking 5 movies in the center of the flow cell. There is no motility here. I then started "hunting" for mobile microtubules. This brought me near the boundaries of the flow cell. There I was able to see a very small number of microtubules moving. So, I took a full data set. The MTs ultimately disintegrated during the data set. I then moved away from the tape in increments of FOVs. I have finally reached an area where I get mobile MTs without them breaking apart (movie 8&9). I plan on moving away from the tape in FOV increments and I'm hoping to see a speed curve for this assay reminiscent of an upside down parabola. Where the speed is slow near the tape and then near the center of the flow cell, things slow down again.

So I'm on movie 10 and I'm already seeing stuck MTs. They are all stuck at movie 12. So, I'm moving down 4 FOVs to get back at the motile MTs, and sure enough, there are some. I just traveled parallel to the tape to get the rest of the movies for a complete run.

To make sure this isn't a fluke, I'm taking an extra measurement in the middle of the flow cell(21) and another one near the other tape (22-23). Movie 21 doesn't have any motility and movie 22 and 23 do. This means there is just something about those areas that have the magic amount of kinesin and passivation to support motility. I'm super glad it's symmetric because if it wasn't, then it would have just been weird. My last movie, (24) will be of me scanning across this magical region where there is motility in the flow cell. Movie 25 will complete the scan across the flow cell.

Since I am done with data taking for now, I decided to do something fun. So, I made a hack for my stage mover thingy on the microscope. It now has a micrometer on it. 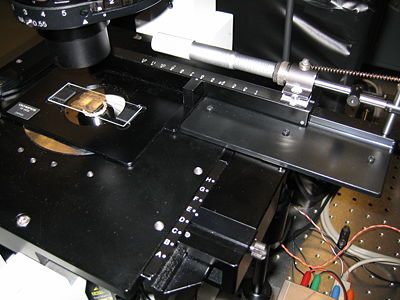 I took some spare parts from an old linear stage that didn't function anymore and was basically scrap. I then got a 2" micrometer and fit it to the stage thingy. The spring I'm using isn't that great and may have to be replaced but, for the range of motion I am using it for in my flow cells, it works great. Plus, the stage thingy retains its functionality because you can take off the micrometer very easily.

Now, to try and put the other direction on it. What's cool about this is that there is now a possibility for further upgrades i.e. software controlled micrometer and limitless tracking capabilities.

I suppose if I worked more than the hour I took on it, it would work better. Eh, it works well enough right now.