I finished all my work in regards to the temperature stabilization of the objective. It now reads out temperature quite well and tags the files with time stamps in the same manner that Live Feed does. I also got the other PI controller from TeTech up and running, although not as well as I want it to. It is right now working as my slide warmer.

Previously, I didn't exactly know what the temperature of the objective was due to a very poor setup. This caused me to put the temperature of the objective higher than was necessary for it to be at 30C. It was something like 32 or 33C. The slide warmer is at 30C and has always been so. In my data, I saw a characteristic "warm up" time where the data I took was not very stable until 10 minutes into data taking. I'm hoping to see a much less "warm up" time since my slide is at 30C and my objective is at 30C.

So this is the first experiment to determine if everything is working. This casein was not frozen and I'm using 0.5mg/mL whole casein with the kinesin and passivating the surface with 1.0mg/mL. I plan on doing this with the other casein constituents so I figured I may as well try it with the whole casein.

So there are some things to note about the first assay.

I was hoping that the MTs would last long enough to try the thing mentioned above. However, I think my Taxol is bad so the MTs just blew up. 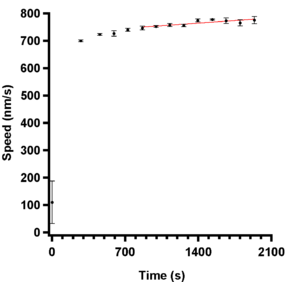 The reason why I couldn't get the entire FOV to be in focus is because of the way I mounted the top thermometer. I used tape to get it to stick and since the objective is an oil immersion objective, oil seeped underneath the tape. This cause the tape to curl up and move the slide. I normally hate beyond all comprehension to glue things but I cannot think of any way around this one. So, I am now using some thermal epoxy to glue the thermometer down to the top of the objective. I reasoned that since we already have an identical objective to the one I am using right now, and that one is not in use, I could play around with the one I have. So, if I totally destroy it. 1st off, sorry. Second, we have another one so I don't have to be delayed with experiments.