So the other day I talked a little bit about the LED and looking at constant illumination in one spot for my assay. The results are below. 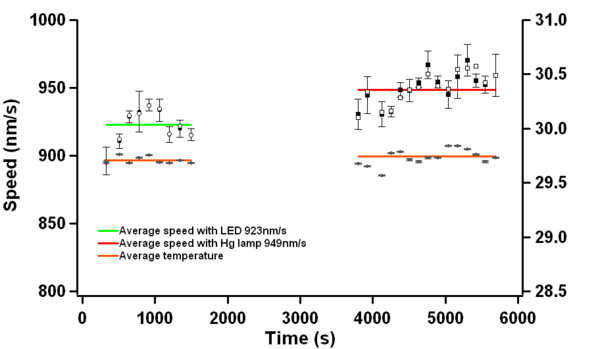 The data to the left is when I was using the LED. The average speed is lower than the average speed I was getting with whole casein at 30C which was again 950 nm/s. This showed it to be around 925 nm/s. The temperature measurements also look less noisy. However, if you look at the data posted the other day, the same phenomena occurred. In the beginning of the runs, the temperature data has a smaller oscillatory amplitude. I'm not sure if this is because of the Hg lamp or if it is due to me moving the probe around when I switch out to other samples. I should probably start collecting the data from the temperature controller to see if the oscillations from the temperature probe are due to the controller cycling on and off.

Steve Koch 22:26, 25 June 2010 (EDT): Hey great data! What does the above sentence mean, "I still get the same type of fluctuations when I move the sample around?" Do you mean you get the same variability in speed, but not a slow constant increase? Was ambiguous to me.

I can get away with using the LED for fluorescent studies. But, I'm not sure I want to because there really isn't enough light to illuminate the microtubules. And, I don't want to increase the amount of rhodamine tagged tubulin in my setup because I don't want the fluorophores interfering with kinesin motility.

I also don't want to have constant illumination of the sample in one spot. This way I don't get possible local heating from the lamp.