Below are the things I want to look at.

So I went ahead and made up a batch of tubulin suspended in what I am calling Heavy TSB (Tubulin Suspension Buffer). Note to my self to make sure I explain this!

I polymerized a batch of tubulin in TSB and Heavy TSB. I want to see if microtubules can polymerize in both H2O and D2O.

For the slides, I just made up a batch of motility solution. There is no casein on either slides because I'm interested in looking at the tubulin and not the kinesin MT mix.

The below movie is of MTs in the regular motility solution. Some things to note are that there are very few but long MTs in the field of view. Also, the antifade is quite nice in that it takes a while for the MTs to fade. I'm not sure if the Taxol I'm using is rocking or if I've done something that is helping prevent opticution because these guys are not breaking apart. Hmm. I wonder if DMSO has something to do with it.

The movie below is of MTs polymerized in Heavy TSB and stored in a Heavy Motility solution. The MTs are smaller than the ones in the regular sauce and, it appears that they are thinner? Not sure. There are also a lot more of them on the slide. I have no idea what is going on but it could be because of the difference in osmotic pressure. For certain, MTs will polymerize in heavy water which is mind boggling considering that heavy water is not water. Crazy cool.

I should also point out that I had to change the gain and exposure rate on the heavy water stuff. I'm not sure why but, it is orders of magnitude brighter than the regular stuff.

So I need to figure out a measure of how stable the MTs are in D2O. It's quite apparent that there are loads of different things going on here between the two.

01:13, 3 November 2009 (EST)
I'm surprised too that D2O polymerization produced relatively normal-looking MTs! I was thinking it was going to produce a mesh (physical gel) kind of thing. Shorter, more numerous MTs is consistent with an easier nucleation (as seen with DCX (doublecortin) in that paper we saw several months ago). It also looks to me like the MTs are bundling and even possibly branching. The brightness could be do to bundle formation. The background looks very high too.

I think I want to try and shock the MTs to see what happens. To do this, I'm going to prepare a slide and then shock it by freezing it.

I never would have guess that the MTs would have survived. But, they did. There are some differences between the two though and I'm not sure what. (Steve Koch 01:15, 3 November 2009 (EST):Interesting!) 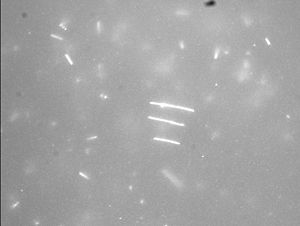 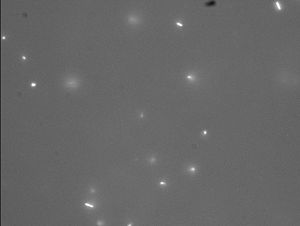