Today I came in thinking I could move the microscope myself. Dumb dumb dumb... At any rate, I fussed with the 1064 optical tweezers today and I had to make a modification to the setup. Before I modified the setup, I played around with the output power of the laser and looking at the optical axis I made yesterday to see if the beam would deviate with power. I didn't find any conclusive evidence that it did but I kept working with it above 1 W.

The modifications I made where as follows:

As you can see, I had to move the power modulator from yesterday. I had to do this because the entrance and exit pupils do not live on the same plane. 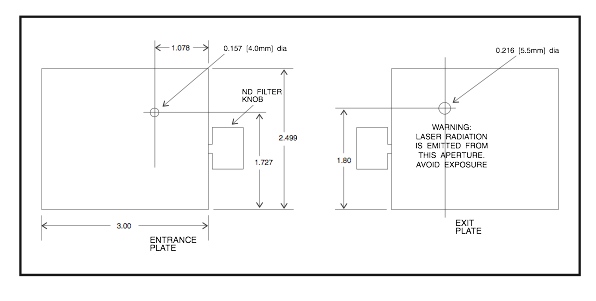 I didn't realize this at first. So, I wasted time trying to see what was going on. An hour wasted when I should have looked at the specs of the thing before I started fussing with it.

Grrr... Why do I keep teaching myself this lesson? Well, it was only an hour...

After realizing this, I decided that I wanted to maintain a nice optical axis so I opted to put the power modulator before the mirrors. I think the power modulator has built in ND filters but, I don't know what the OD of them are nor do I know how to use them. I'm guessing that they are controlled by the only knob on the thing.

After realignment, I put in the 10X Galilean Beam Expander. This guy is mounted on a XY stage pieced together from parts and a 2" kinematic mirror mount. This is so I have the ability to move the expander up and down, left and right, and pitch and yaw. Aligning the beast was a bit cumbersome but I did it. Here's what I did:

I have no idea if this is the best way to do this, but in the end it worked. I just iterated the last steps until my beam did not deflect any with the expander in place.

Koch question: Do we have another dichroic mirror for 1064 that will mount into the cage cube I designed?