This is my interpretation of the following article. Please do not accept my comments as correct until you have read the paper and can generate your own thoughts on it. 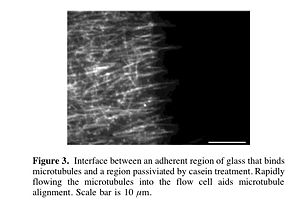 Very nice article that references other techniques to make patterned microtubule arrays. I like this article because it is well written and easy to follow.

For me, I think the usage of APTES is cool and I should remember this for future work as well as the fabrication of microtubule roads using photolithography.