This is my review. Not yours. So please don't take my review as meaning anything until you have read the paper. Plus, I may be wrong with my thoughts. If I am, please feel free to correct me.

Mechanism of Microtubule Stabilization by Doublecortin 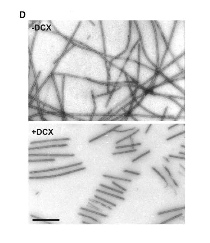 First, this group references things really well. I can only hope that when I go to write papers, I can be at least 10% as efficient with referencing things as they are. In fact, I am going to make it my mission to reference as well as they do. Thanks Koch for showing me their papers.

At any rate, you can't buy doublecortin. I did a quick search for papers and it appears you can recombinantly grow DCX. I'm a little frustrated with this. Mainly because I don't know how to do it and I really want to know so if I need something, I can make a bug grow it for me. Hmm, I guess this is why biophysics is tough. You just can't buy everything you need.