Don't read my review or comments without reading the paper for yourself first. Please.

Ionic and nucleotide requirements for microtubule polymerization in vitro

So here is an outstanding question I had. Why do we use the buffer BRB80? Well, this solution contains a pH buffer called PIPES. But why do we use 80 mM of PIPES? This article did a study that shows that the viscosity of a tubulin/microtubule solution increases for increasing amounts of PIPES used. It decreases the more you put in it, and has a maximum at, you guessed it, around 80 mM PIPES.

At first, viscosity measurements may seem a little funny to do to determine polymerization but, it makes perfect sense. For example, Jello™ is more viscous than syrup. Why? Well, I think it has to do with Jello™ having longer molecules in it that have a higher probability of tangling with each other. Thus, it is more viscous. And, but that logic, viscosity measurements can indirectly measure polymerization. This is an old paper and the technology for determining polymerization is better now so maybe there is a more recent paper that discusses this. 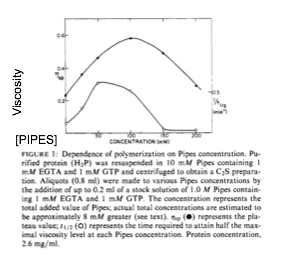 So to check the dependence on monovalent ions, they added KCl or NaCl to solution. They found that since their PIPES was really Na-PIPES, added sodium ion levels to a final concentration of about 150 mM totally killed all polymerization. The same occurred for potassium ions. What they found was that the total concentration of Na or K ions in solution should be around that found in mammalian cells for optimal tubulin polymerization. 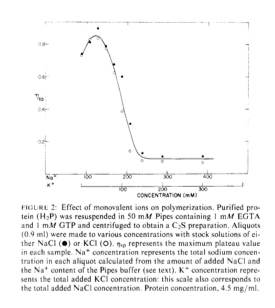 They also talk about pH dependence for polymerization in this paper. PIPES has its pKa value at 6.76. Physiological pH is around 7.4. I have seen people argue for the usage of PIPES in microtubule buffers because its pKa is around the pH your body. No way is this a good argument. Remember pH is a logarithmic scale. If your body is at a pH of 7.4 then a pH of 6.4 means that there is an order of magnitude more hydrogen atoms in solution. I'm not sure a person can survive with a pH of 6.4.

Question: Of course one can argue that polymerization occurs the best at a pH 6.8 because of PIPES. So, if you use another buffer, say TES which has a pKa of 7.5, polymerization may occur better there. Who knows...maybe this can be an undergrad experiment.
Steve Koch 00:18, 10 May 2009 (EDT): They hypothesize that the zwitterionic properties of PIPES may be important, so that it is highly polar at its pKa. They say that non-zwitterionic buffers did not support polymerization. I agree this could be a cool undergrad experiment.

Andy Maloney 01:54, 10 May 2009 (EDT): I've read this in other places as well. But, Sigma sells all kinds of zwitterionic buffers used for various biological applications. The one I linked to just happened to have a pKa of 7.5. 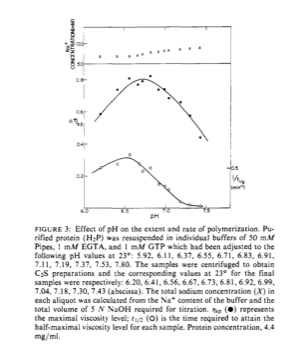 Now for my favorite part, the divalent cations discussion. They did these experiment in the absence of EGTA and found that in vitro requires mM concentrations of calcium ions to prevent polymerization. They also found that around 10 mM magnesium prevent polymerization. They also found a relation between calcium and magnesium ions. They note that as the concentration of magnesium ions increased, the amount of calcium ions needed in solution for a catastrophe dropped.

Note: I'm not sure I agree with these findings because I'm not sure you can glean this from their experiment.

To asses the roles of calcium and magnesium in solution, they used the chelators EGTA and EDTA. EGTA binds calcium strongly but it doesn't have such a strong affinity for magnesium. EDTA has a high affinity for both magnesium and calcium. What they found was that adding EGTA to solution did nothing for polymerization either positively or negatively. However, adding EDTA did affect polymerization negatively. This implies that magnesium is needed for assembly. 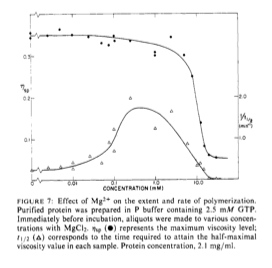 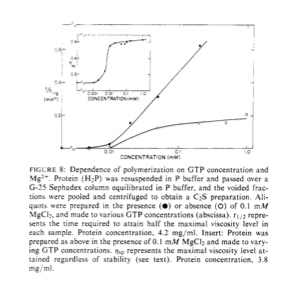 They also note that the amount of Mg2+ ions needed for polymerization is that concentration needed for your brain to make microtubules.

In their discussion they note that their pH measurements are not the same as other groups. They also say that those other groups had different buffers. I wonder if my idea above has any merit from this statement.

So I've finally found out why we use the BRB80 buffer. This paper tells me everything I needed to know about it. Unfortunately I still think using EGTA is not necessary but the stuff we got from Cytoskeleton has it in there.

Steve Koch 00:20, 10 May 2009 (EDT): Have we been convinced yet, though, that casein doesn't have some Ca++ in it? I know at one point you said it was not going to, but I think you hedged later. If so, then EGTA will help during the motility assays when we have a bunch of casein around.

Andy Maloney 01:54, 10 May 2009 (EDT): Well, this paper suggests that EGTA does nothing to the microtubules so I'm okay with using it. Casein has calcium phosphate in it which is not soluble in water but that doesn't say anything about there possibly being some calcium ions around. This paper said that you need mM concentrations for calcium to cause a catastrophe. I guess the question now is, how much calcium phosphate is in casein? Is it enough to cause problems? We can check this. Osinski has a fluorimeter we can use and we can calibrate a calcium dye to check how much calcium is in solution. Really easy to do. Also, what if microtubule supporting kinesin in vitro is actually dependent on there being phosphates leaked out of the casein? Ouch. That would mean we are missing something. Remember, I only say we don't need EGTA because we are trying to have solutions with very few osmolytes in it. Not having 1 mM EGTA in our solutions will give us a smaller baseline plus a smaller ionic strength.

Note about non-hydrolyzable analogs of GTP

Steve Koch 01:36, 10 May 2009 (EDT): I was surprised that they found GMPPNP and other non-hydrolizable analogs of GTP did not support polymerization. I think the reason for this is described in the following quote from a 2004 paper out of the Milligan lab: "In addition, the average length of MTs polymerized with DCX was comparable to that seen with MTs polymerized in the presence of the nonhydrolyzable GTP analog GMPCPP (Figure 1E), which is a potent MT nucleator (Hyman et al., 1992)." (PMID 15200960) So, it seems they (Borisy 1974) misinterpreted this as lack of polymerization, because the many short MTs did not greatly increase viscosity? They probably had even shorter MTs, because they probably had a very high tubulin concentration.

Andy Maloney 01:59, 10 May 2009 (EDT): I think you are right. I didn't read the nonhydrolyzable GTP section very closely because I didn't think we would ever be using it.