I'm not sure of copyright laws so instead of posting the paper, I will link to it.

00:13, 13 March 2009 (EDT)
This is a great page! You've really nailed your introduction to microtubules. Great drawing and really great understanding for day one. You even noted that your drawing is idealized, which I think people forget sometimes. Here's the paper by Haiqing Liu when she was in George Bachand's lab at Sandia: http://www3.interscience.wiley.com/journal/121544300/abstract (it actually made the cover!). In that paper (I was a middle-author), we talked a bit about how the way the MTs are polymerized dictates how many protofilaments there are, and this determines things about helicity, which affects the "circles" formation. (I didn't write any of the stuff about protofilament number / helicity)

Before I go anywhere with this paper, I need to review the basics of microtubules. This is my introduction to these items so hopefully I will get some things correct about them.

The first thing to talk about is the structure of microtubules. Microtubules are made up of heterodimer subunits. The sub-subunits are called [math]\displaystyle{ \alpha }[/math]- and [math]\displaystyle{ \beta }[/math]- tubulin. These sub-subunits combine together and are called tubulin. Yep. Pretty redundant and ridiculous terminology, thanks biology! These sub units form what is called a protofilament of which microtubules are made out of.

Okay. This is ridiculous. Especially the usage of the words heterodimer, redundant usage of tubulin, and protofilaments. A picture is worth a thousand words and here goes one. 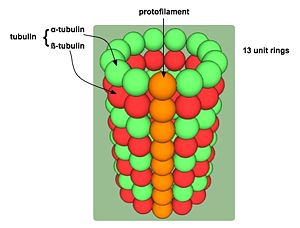 I will order the terminology going from smallest to largest.

I should note that my picture is not to scale and real microtubules are not as regular as what I have drawn. I drew the least amount of packing possible for the [math]\displaystyle{ \alpha }[/math]-tubulin and [math]\displaystyle{ \beta }[/math]-tubulin subunits. I think in nature they must pack together more efficiently. I might make a better picture later but for now it works for me. I'm sure the packing geometry is simple once you know the size of each tubulin.

The goal: Measure Young's and the shear moduli in vitro.