From OpenWetWare
< User:Adriana N. Hooks
Jump to navigationJump to search

Control: circled dish multiple times and continued to squirm to other side.

A3 (generally observed from dissect scope): unhatched → still at about 48 hpf

Treatment: initially didn’t react, then moved once around dish.

A3 (from dissect scope): no egg inside well

A4 (from dissect scope): found to be unresponsive to stimuli dead

C6 (from dissect scope: no egg inside well

(all fish were fed)

poked with pipette tip for movement

Control - all are alive: Movement: immediate reaction when pipette tips was placed in cell. circled and squirmed around dish multiple times.

D6 (dissect scope): didn’t respond to stimuli initially → closer tip = response. appear more transparent with strip of yellow on back. not as responsive.

a3 [control] - removed and preserved, assumed dead bc still not hatched.

treatment: all are alive, 1 missing movement: more than control, constant.

B5 - nothing in the well

unable to observe, kept swimming into wall. Assumed to be because it is avoiding the light source from the microscope lowered light: was able to view for short amount of time after searching. Unable to see clearly to observe so turned light up again: immediately swam away. - continued to swim into wall.

Previous findings: During the first Hay Infusion observation, in week two, there was a noticeable "swampy" odor along with a thing layer of film. Small amounts of mold were visible along the film and fungi, already on the bench before hay infusion mixture, increased.

Recent findings: There was still a swamp-like odor similar to fertilizer. The film found from the previous week increased (in thickness) along with white mold growing. Some mold was found growing under the layer of film. The berries that were in the jar starting as red berries and were orange during week 3 observation. The leaves and branches under the water appeared to be the same in terms of color a decay/vibrancy while the ones above water were discolored and limp. Water line receded. 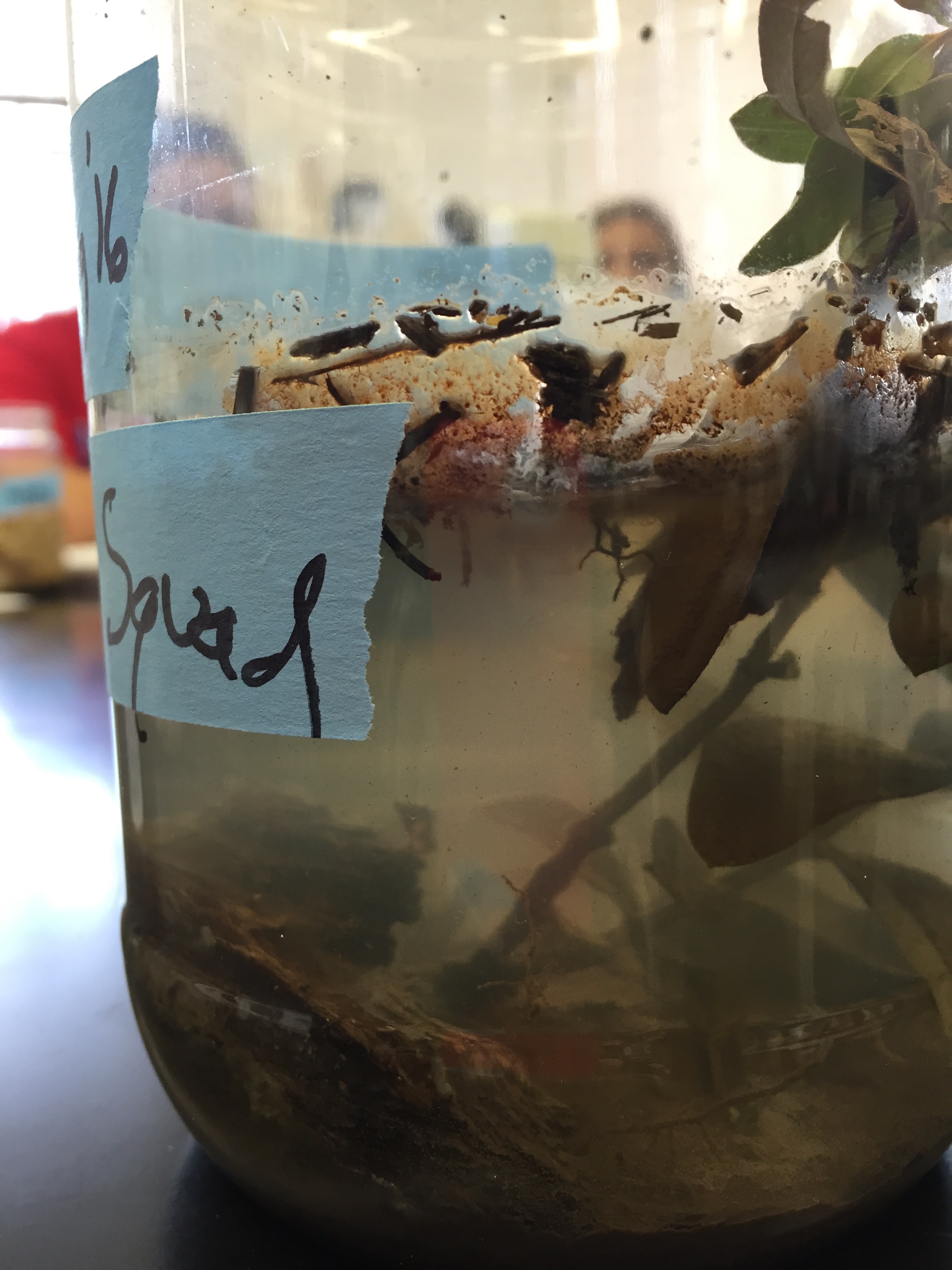 (a) taken from the mold on first (film) layer. [total of 2 found in this section] lead to identification: colored(green/brown), single, motile cells, one flagella =Euglena

(b) taken from center of jar, open water [total of 1 found in this section] colored(green), single, motile cells, one flagella =Euglena

(d) taken from area under the bench - closest to mold & fungi piece [total of 1 found in this section] colorless single, motile cells, creeping (sliding), -no visible rays, but assumed = 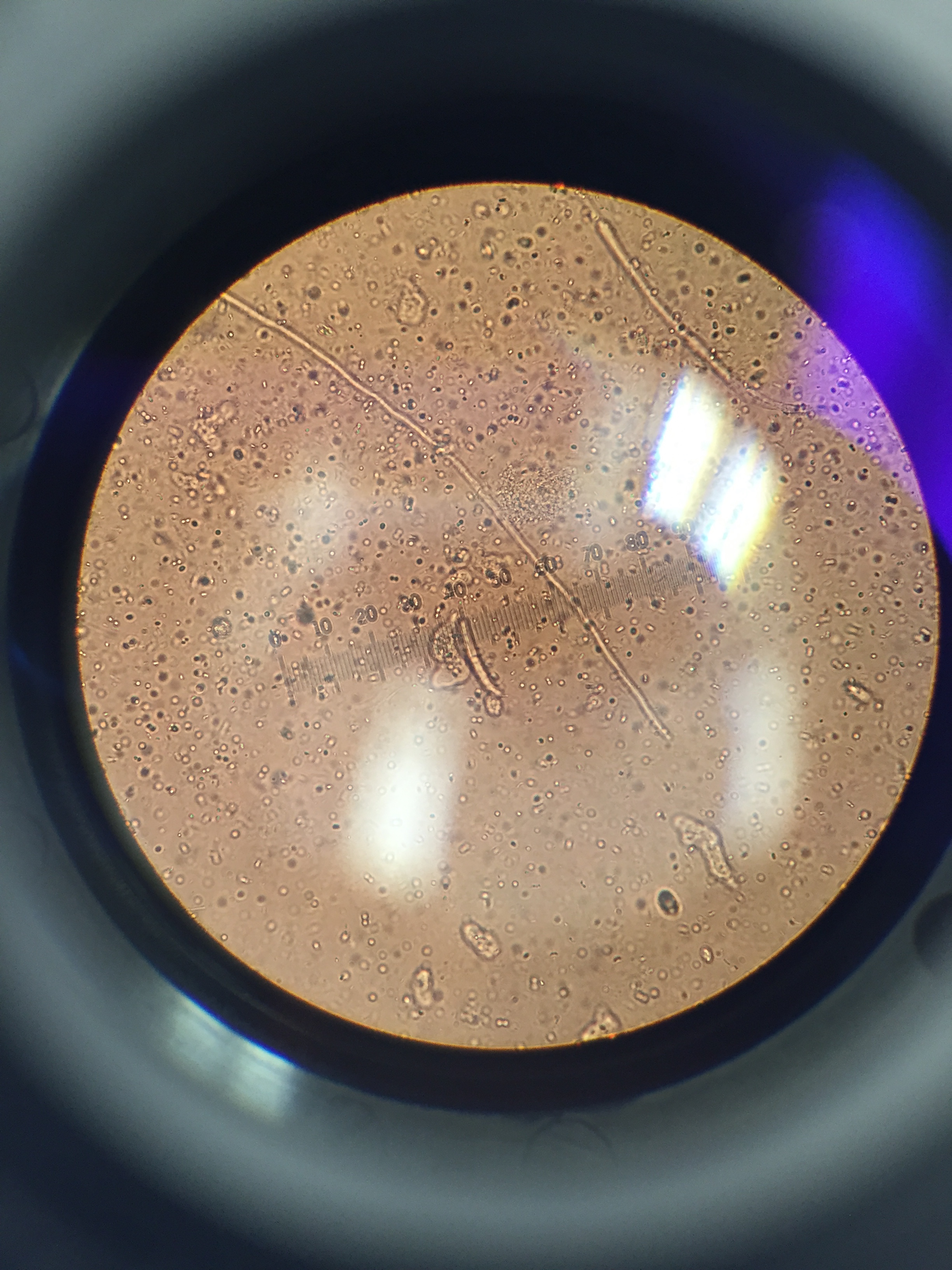 Description of Transect The transect section given was section 3. Within the post in the area, many habitats were discovered, one being a birds nest. On the same tree, there was a sign attached reminding people to respect the area. In a near row of trees and shrubs was a row of fallen berries that had an unpleasant scent. Along the first turn of the sidewalk was a bench made out of wood that seemed to be rotting and around the whole transect was plenty of trash of candy wrappers and cigarettes.