I am a member of the iGEM 2010 twam of Imperial College London. I learned about OpenWetWare from the project organiser of my team who told us about this site which we will be using during the following months.

Currently doing my bachelor in Biology with Microbiology at Imperial College London.

Monitoring Cell Activity might be very useful for scientists in many situations. We propose the use of Cell State Reporters to quickly give visual information of the activities or phase the cells are undergoing which could be achieved by using elements that control expression of state specific genes. This might help to maintain a healthy population and to determine whether population grows anaerobically or aerobically. Furthermore it could be used as a warning signal when cells undergo undesired/stressful phases and to examine if the cells grow in synchrony. Many different regulon systems could potentially exploited for this purpose including without limitation:

Use of system specific promoter, enhancer or repressor elements could be used to create a system that gives feed back in form of different fluorescent proteins to the degree to which the system is activated and by extension about the environment the cell is in.

The Arc system is a two component system consisting of a membrane bound sensor kinase (ArcB) and a response regulator (ArcA). ArcB is activated by changes of the quinol/quinone ratio and autophosphorylates. It then phosphorylates ArcA that represses genes involved in aerobic metabolism such as Citrate synthase, α-KGDH, Pyr DH, Lac DH, cyt bo and SDH but also upregulates cyt bd.

The Fnr system makes use of the Fnr proteins that contains a iron sulphure cluster. Depeding on the redox potential of the cytoplasm and therefore the presence or absence of oxygen these can undergo changes. In the absense of oxygen this allows Fnr proteins to dimerise and acts as transcription regulators. It activates Fumarate reductase, NO3-reductase, NO2- reductase, DMSO reductase, FDH reductase and Pyr Formate lyase. It represses SDH, cyt bd, cyt bo and the fnr gene itself.

The switch of cell state and the subsequent activation of a reporter or activator gene could be used to act as switch between different types of logic gate allowing us to give different, but predictable and programed, outputs from just one input (change in cell state). By creating a different environment we overcome repression of one protein by another thus causing a switch in the function of the logic gate.

I am struggling here. Does anybody have any suggestions? 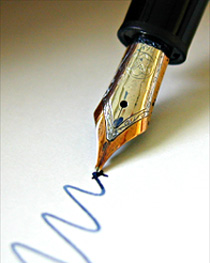 The tip of the BioPen is where the antibioics are delivered

A pen that uses bacteria as inc rather than conventional inc. The bacteria produce a pigment that give them colour. Different pigments are activated in response to different sugars that the bacteria are fed. In order to limit the bacterial growth nitrogen/phosphate is used as a limiting factor: Every week or so a certain amount of nutrient solution containing nitroen and/or phosphate is added to allow healthy growths of the bacteria. Whenever a pigment of a certain colour is desired a specific sugar is added, not principally as a carbon source, but to act on a operon such as the lac operon. The expression of the pigment producing proteins is coupled to the synthesis of proteins involved in the catabolism of a specific sugar. This allows the use of these bacteria and the pigments produced by them as a BioPen. The tip of the BioPen is where the antibioics are delivered to kill the bacteria. This prevents backflow of antibiotics and killing of the culture.

Update: Since the BioPen based on pigments is not very useful compared to regular pens and takes a week to change colour alternativel it could be used to produce a continuous supply of flourescent proteins (GFP, YFP and GFP) that are not readily available in shops and could be used for party decorations with UV light. This switch would occur much quicker and only take minutes rather than days. Additionally the colour will fade over time which might be desirable when using it as decoration as it would not have to be removed from either skin or cloths, walls or furniture.

Human practices: The bacteria have to be killed by some mechanism before leaving the pen… a different compartment in which bacteria enter before being releases where they are lysed so the pigment is released? Maybe use a Fountain pen rather than a ballpoint pen so bacteria grow in liquid medium and can flow out of the growing vessel and then are killed by antibiotics.

In order to prevent other - potentially pathogenic - bacteria from growing there, some colicin mechanism might be added.