Non-invasive imaging techniques are particularly important in the field of tissue engineering in order to evaluate the efficacy and outcomes of engineered tissues, especially in vivo. The state of assessment currently uses histology and direct mechanical measurements as analysis methods, and this requires the destruction of the engineered tissue, as well as the sacrifice of experimental subjects in order to evaluate results of implanted tissue [1] [2].

Techniques that have been developed to be non-invasive take advantage of imparted energy waves within the tissue, which absorbs, refracts, or scatters based on the tissue’s characteristics. Of these techniques, ultrasound imaging has been proven to be a versatile method with multiple applications. Ultrasound imaging refers to an imaging method that uses acoustic waves ranging from 1-50 MHz to image the desired tissue [1]. 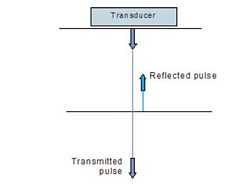 Figure 1. Diagram of a transducer releasing an ultrasound pulse [3].

In order to create the acoustic waves needed for the device to work, ultrasound devices consist of a transducer that produces the acoustic waves necessary for imaging. This transducer is made of a piezoelectric material, which expands or contracts based on an applied voltage. The expansion and contraction is translates into a vibration that is responsible for the production of acoustic waves. The device fires off pulses of acoustic waves which will penetrate the tissue until it reaches an interface where there is a large change in acoustic impedance between the two tissues. Usually, changes in acoustic impedance are a result of differences in tissue density and compressibility, with less dense and more compressible tissues having a lower impedance than higher density tissues. These interfaces are where a portion of the energy will be reflected back towards the transducer, and occur at varying depths within the tissue. Two types of reflection occur within tissue, specular reflection and diffuse reflection. Specular reflection occurs when the interface is smooth and the reflection can be predicted easily, whereas diffuse reflection occurs where the interface is more irregular and the reflection of the sound waves is more diffuse and unpredictable [3].

The transducer is not only responsible for the production of the acoustic waves, but is capable of receiving and translating the reflected waves into a series of voltage signals that can be represented as an image. By measuring the time that the reflection of the sound wave takes to return to the transducer from various tissue depths, the depths of various tissue interfaces can be calculated. Moreover, the returning acoustic waves contain energy related to the scattering and reflecting characteristics of the tissues that it had traversed and reflected off of. This mechanical energy is translated into a voltage value by the same piezoelectric material on the transducer, which can be represented as a singular value on a gradient of brightness of an image. The voltage received by the transducer is directly related to the brightness of the point on the picture. From these voltage signals, vertical slices of an image can be generated, which can be integrated with other vertical slices to create a two-dimensional image [3]. 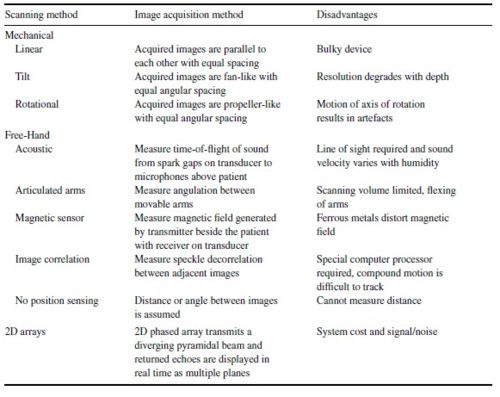 Three-dimensional methods of generating ultrasound images have also been explored to increase the usefulness of the image, as well as to increase the reproducibility of the image for following studies. Also, finding volume of tissue regions is easier and more accurate with a three-dimensional representation of the system, rather than by estimating the volume with some cross-sectional, two-dimensional images. Multiple scanning methods have been developed, each with some disadvantages. Most of the methods use the same transducers used for two-dimensional imaging, but incorporate some sort of positioning and orientation system that images an extra dimension. Four approaches that have been developed include mechanical scanners, free-hand scanners with position sensing, free-hand scanners with no position sensing, and two-dimensional arrays. The image acquisition method, as well as each method’s disadvantages, are outlined in Figure 2 [4].

1912-1945 - Developments in sonar technology and echolocation are made in response to the Titanic shipwreck and World Wars I and II. Sonar’s pulse-echo principle functions fundamentally the same as ultrasound, albeit at lower frequencies.

1955 - Ian Donald uses a repurposed metal flaw detector like those developed by Sproule and Firestone to differentiate between different tissues in excised cysts.

1955 - Smaller transducers were made possible by a discovery of the piezoelectric properties of lead zirconate titanate.

1966 - The first commercially available real-time imaging ultrasound machine was used by Hoffman and Hollander to image structures of the female pelvis. 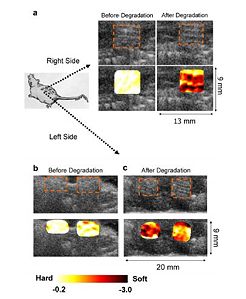 Figure 3. Ultrasound images and strain maps of in vivo POC scaffolds before and after degradation generated by Kim et al. [2].

As noted beforehand, a notable feature of ultrasound images is that the contrast of the image is based on the magnitude of the voltage response, which is related to the magnitude of the mechanical energy reflected by the tissue. In short, the mechanical properties of the tissues can be related to the contrast of the ultrasound image, with harder tissues having a higher contrast. This makes it particularly useful for examining mechanical properties, as opposed to other imaging methods. The mechanisms for contrast in MRI (distribution of protons and differences in relaxation times) and X-ray imaging (differences in atomic numbers of materials) don’t reveal as much mechanical information about the imaged tissues as the contrast of an ultrasound image [6].

One example of such an application is the imaging of a tissue scaffold in vivo as it degrades. Studying the rate at which a scaffold degrades is an important issue for any regenerative study, as the degradation rate of the scaffold should be the same as the rate at which the new tissue grows. As engineered tissue scaffolds degrade, the stiffness of the scaffold also decreases, and the construct experiences a decrease in the elastic modulus. This would be a good way to quantify degradation, as the degradation rate could be measured by mechanical means, but it would involve the destruction of the scaffold, as well as excision from any in vivo system. Ultrasound imaging can bypass the excision of the scaffold, as well as continuously measure the degradation of the scaffold without having to destroy the structure. Experimentation has been done to relate both in vitro and in vivo strain maps of Poly(1,8-octanediol-co-citric acid) (POC) scaffolds to the contrast of ultrasound imaging, as shown in Figure 3 [2].

Another parameter worth monitoring in regenerative studies is the vascularization of the area in and around an implanted scaffold. Techniques to monitor vascularization are well established ex vivo, but either have contrast limitations (X-Ray microcomputed tomography), or are impossible to do (Scanning Electron Microscopy) in vivo [7]. Some in vivo imaging methods are possible, but are limited by the method’s very small penetration depth (confocal optical microscopy, two-photon microscopy) and the necessity of toxic staining or radioactive tracers (positron emission tomography) [8]. Ultrasound imaging, as well as photoacoustic variants, are being studied as possible alternatives for the aforementioned analytical methods [7] [8].

Challenges & Comparison with Other Imaging Methods 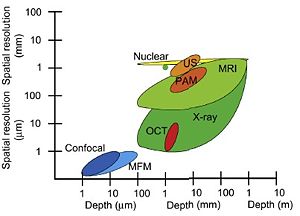 When imaging with ultrasound, there exists a balance between the penetration depth of the acoustic wave and the spatial resolution of the imaging. Lower frequency (1 MHz) waves are able to penetrate the tissue larger distances, up to 3 cm, but are unable to image with a spatial resolution of more than a few hundred microns. Conversely, higher frequency waves (50 MHz) can image structures as small as 20 microns, but are unable to image at depths larger than a few millimeters [1].

From comparison with other imaging methods in terms of spatial resolution and imaging depth (Figure 4), other imaging methods like MRI and X-ray look to be more appropriate for in vivo applications [1]. However, an advantage that ultrasound imaging has over those two methods is that the sample time for ultrasound is much lower than that of MRI and X-ray, generating images from 15-60 per second. This allows not only for a three-dimensional representation, but a 4D, or dynamic visualization as well. Tissues can be imaged in motion, as opposed to a static image, and can be useful for examining tissue responses to stress and forces [4].