Anthony Atala, M.D. is the Director of the Wake Forest Institute for Regenerative Medicine and Professor and Chair of the Department of Urology at Wake Forest School of Medicine and one of the leading scientists in the fields of tissue engineering and regenerative medicine. 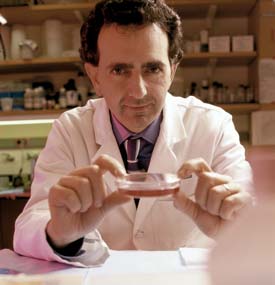 Dr. Atala graduated from University of Miami with Psychology major and completed a medical degree in urology from University of Louisville. He pursued a fellowship at Children's Hospital Boston, Massachusetts (affiliated with Harvard Medical School) and started his independent career at the same institute developing artificial organs for humans. In 1999, his team reported the successful creation and transplantation of artificial urinary bladder in beagle dogs that showed excellent functional capabilities in terms of retaining urine and normal elastic properties [1]. After serving as the Director of the Laboratory for Tissue Engineering and Cellular Therapeutics at Children's Hospital Boston, Dr. Atala later moved to Wake Forest Baptist Medical Center in North Carolina and continued his seminal work of lab-grown organs. In 2006, his team reported succesful transplantation of engineered bladder in humans without any major complications. The patients were monitored for 5 years after surgery to determine long-term efects [2]. As of 2013, he is the W. H. Boyce Professor and Director of the Wake Forest Institute of Regenerative Medicine.

In 2007, his work on artificial bladder was listed as Time Magazine's top 10 medical breakthroughs and No. 1 Top Science story by Discover Magazine. In 2009, U.S. News and World Reports featured Dr. Atala as one of the 14 pioneers of medical progress in the 21st century. Dr. Atala serves as editor and associate editor in many peer-reviewed journals including Stem Cells-Translational Medicine, Current Stem Cell Research, and Tissue Engineering and Regenerative Medicine. He is also editors of numerous books in the area of regenerative medicine and urology. He published more than 300 journal articles and applied for or received over 200 national and international patents. He were also invited to give TED lecture on artificially-grown organs.

According to National Institute for Continence UI affects 200 million people worldwide including 25 million adult Americans who suffer from transient and chronic UI [5]. Therefore artificial bladder will have a potential market and can improve human life and function. 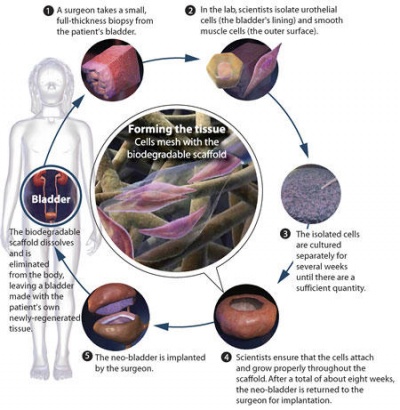 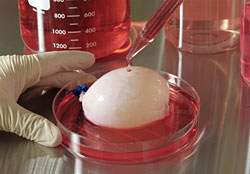 However, the scientists arose concern that the technology can be challenging to the elderly people who have limited regenerative capacity to obtain sufficient amount cells for the transplantation. One more question remains that for the bladder cancer patients who have malignant urothelial cells. Harvesting and culturing the malignant cells can increase the possibility of malignant cell transplantation back to the body [6]. Steve Chung of Advanced urology Institute of Illionis commented that "Atala and his colleagues should be praised for the milestone they have reached, but further multi-institutional studies are needed with longer follow-up. Until then surgery using intestinal tissue to repair the bladder remians the gold standard." [7] As of 2013, the bladder is not yet approved by FDA.