I started looking into this because I wanted to generate a strain in which I could control the level of induction from both a pTrc and a pBAD promoter in individual cells. After talking to a few people, I was able to sort out that these promoters both exhibit all-or-none activity in "wild-type" E. coli strains. I also discovered that it seems that not everyone knows about this (or at least the details of the process and how to get around it). Below is a summary of the information I was able to assemble on the topic. Hopefully, you know more than I do and can add more information.

What is an "all-or-none" promoter?

Inducing gene expression from an "all-or-none" promoter at subsaturating inducer concentrations results in a heterogeneous population of cells in which some are fully induced and others are induced very little, if at all. What is often confusing about this phenomenon in practice is that a population of cells will typically respond in a linear manner to increased concentration of inducer. What is really happening, though, is that more cells in the population are being turned on as inducer concentration is increased, but there are still some cells in the population that are not induced at all. The "on" phenotype is a result of inducer importers being turned on when a cell is exposed to the inducer, resulting in increased uptake of the inducer. At subsaturating inducer concentrations, there is not enough inducer to go around for all of the cells, so those that get their importer turned on first get all of the the inducer. 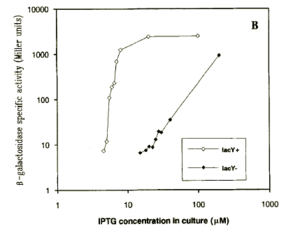 Constructing a strain that allows homogenous, titratable induction of both lac and PBAD promoters