Titanium as a Biomaterial by William Doherty

The transition metal titanium is a high strength, low density metal. Titanium, stainless-steel, and Co-alloy's are the three metals most commonly used as biomaterials. Of all the metals available, titanium is one of the most biocompatible, due to its high corrosion resistance within the body, its osseointegrative abilities, and its bio-inertness. [1]

Of all the metals available for medical use, titanium has the highest strength to weight ratio of any metal. [1] It has a density of 4.51 g/cm^3 [2], which is closest any metal biomaterial comes to the average density of human bone, which is 3.88 g/cm^3 [3]. It is non-magnetic and will not be attracted to any outside magnetic forces and will not be detected by metal detectors. It can be machined, formed, and joined using standard tools and procedures, making its workability comparable to that of stainless steel. [4] 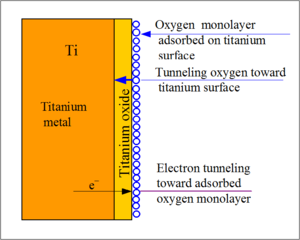 Figure 1 This figure shows how the oxide layer prevents the titanium from corroding.[1]

Titanium and its alloys are biologically inert, meaning it remains unchanged when implanted in the body. They do not perform any adverse reactions and are well tolerated by human tissue when implanted in the body. When titanium is exposed to oxygen, thin layer of oxide film naturally forms in titanium’s surface. This layer is a strong and stable layer that grows spontaneously in contact with air and prevents the diffusion of the oxygen from the environment providing corrosion resistance. [1]

When the titanium is implanted into the body, it undergoes a series of reactions in order to form a fibrous tissue free interface that has direct contact to bone tissue. Using the small presence of oxygen found in tissue and blood, a thin oxide layer is formed on the surface of the implant. This oxide layer gets thicker as it incorporates different elements from the extracellular fluid. When exposed in physiologic solutions, the oxide layer becomes polarized and heterogeneous. The changes to the oxide layer included an increased amount of hydroxide groups and adsorption of H2PO4(-) and HPO4(2-). Due to the heterogeneous nature of the oxide, the surface promoted adsorption of glycolipids and lipoproteins. [5]

Titanium has the ability to osseointegrate, meaning it integrate with the surrounding bone without the need for intervening soft tissue. [6] The property that gives titanium this ability is its relative permittivity, which is the ratio of titanium’s dielectric permittivity to that of a vacuum. [7] Implants that go through osseointegration will form a stronger and longer lasting bond with bone than that of any adhesive that would be used for an implant.

Titanium implants are commonly made from 5 different grades, varying in its strength and purity at each grade. The grades are determined based on levels of oxygen and other elements alloyed with titanium. The first four grades are almost completely pure titanium. The difference between these four grades is the amount of oxygen within the titanium. Grade one has the lowest amount of oxygen (max O2 .18%), while grade 4 has the highest amount of oxygen (max O2 .18%). [1] The titanium gets stronger with larger amounts on oxygen, making grade 1 the weakest and grade 4 the strongest. Grade 5 titanium is a titanium alloy containing 6% aluminum and 4% vanadium. This alloy is what a large majority of titanium implants are made from. [9] Other titanium alloys, such as Ti-6Al-7Nb and Ti-15Mo-3Nb, are also researched and used for specific implants.

Titanium is the preferred material for any endosseous dental implant applications. Devices such as crowns, implants, overdentures, bridges, and implant prosthesis components used by dentists are all made from titanium. These devices are widely used to help repair, restore, and maintain the condition of teeth and the mouths structure. Most implants are grouped into three categories: osseointegrated, orthodontic, and zygomatic. [10] Osseointegrated implants are implants that bone will naturally attach itself to once successfully implanted. These implants are commonly screw shaped and are the most common among dental implants. Orthodontic implants are used to help bridge orthodontic devices, such as braces, over large gaps in the mouth. [10] Braces made of titanium are growing in popularity since they are stronger, more durable, and lighter than steel braces. Zygomatic implants are used to strengthen and support the zygomatic bone and help rehabilitate restored maxilla. [11] 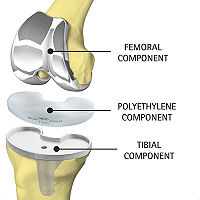 The most common use of titanium is for replacing knee’s and hip’s that have been worn down making it hard to walk and limit mobility. Joints such as the knee, hip, and shoulder are delicate structures that work under extreme conditions. Between titanium, stainless-steel, and Co-alloys, titanium is the metal best suited for these kinds of implants mainly due to the lower modulus and corrosion resistance. Due to the amount of stress and strain being put on the joints, it is important that the material used for the implant has as low of a modulus as possible to prevent stiffness in the joints. Rubbing occurs between the joints and the friction between the two joints. The oxide film that forms around titanium helps protect the implant corroding and eluting metallic ions into the body. [12] Although the coefficient of friction between the two joints is low, the friction could cause metallic ions to elude into the body. [13]

Other devices such as pins, bone plates, and spinal fixation devices are made from titanium. [1]

One of the most common problems with titanium implants is the risk of bacterial infections occurring at the site of the implant. Although various advances in biotechnology have been made, bacteria are still able to colonize on the surface of implants. The use of coatings that have been doped with antibacterial agents and enriching the surface of titanium with inorganic antibacterial agents have seen the most promise in preventing bacterial infection. Other methods include creating a thicker oxide coating on the surface of the implant, electrochemical techniques, and the use of a plasma spray. [14]

Although titanium has a high resistance of corrosion, it still is not immune to its effects. This problem is more prevalent in implants made of Titanium alloys such as Ti-6Al-4V. Titanium implants have less shear strength and wear resistance. If friction is applied to the implant, it could cause breaks in the protective film, exposing the metallic ions underneath. This will result in a higher elution of metal ions into bodily fluids. [15] Although certain surface modifications and coatings have been developed in order to help reduce the rate of corrosion, the implants will still corrode over time. [16]

There have been various studies towards modifying the surface of implants made of titanium and titanium alloys in order to help reduce the risk of infection, increase the bond strength, and prevent corrosion. Certain modifications such as the electrochemical technique, electrophonic decomposition, and phosphorus ion implantation seem the most promising. [6] Surface coatings for titanium implants are being studied to help with increasing bond strength and improve the bioactivity of the implant. Most of the work being done with titanium implants involves applying some modification or coating to the surface of the implant to improve its functionality. [17]