Vascular grafts are used as replacement veins and arteries. These grafts can be manufactured from biomaterials or cultured cells.

Vascular grafts are widely used for vascular access during hemodialysis, a blood filtration technique. During hemodialysis, wastes such as creatinine and urea as well as excess water are separated from the blood, which is then pumped back into the person’s body. Separation is achieved by the use of concentration gradients and semi-permeable membranes. This procedure is used in patients who have acute or chronic kidney failure and is performed 350,000 times annually. [1]

There are three ways of connecting a patient’s blood circulation to a dialysis device. The first method is called an arteriovenous fistula, which is a vein attached to an artery, usually in the forearm. This procedure allows for blood flow to bypass the capillaries, increasing its flowrate. During hemodialysis, a needle is attached through the fistula and waste is removed from the blood. Fistulas are generally the best option for patients and exhibit the least negative side effects. The second method is a venous catheter. This procedure is only temporary, and consists of a tube (catheter) inserted into patient’s larger veins, usually in the neck, chest or leg. The catheter flows two ways and needles are not necessary for access. Catheters often clog, become infected, or cause the veins in which they are placed to become narrow. The final method is

an arteriovenous graft. This graft is similar to a fistula except that it uses an artificial tube placed under the skin to indirectly connect an artery to a vein. This tubing can be used like a vein and punctured repeatedly with a needle for dialysis treatment. These grafts can be used quicker after placement than a fistula, but are more prone to infection and blood clotting (thrombosis). [2]

-1940 – Dr. Willem Kolff filled sausage casings with blood and incubated in a saltwater bath as the first form of dialysis for kidney failure [4]

Figure 2. Scribner Shunt, indirectly connecting a vein to an artery for dialysis access. [5]

When autografts cannot be used in a patient, replacement vasculature can come from other sources. Grafts can come from other animals (xenografts), cadavers (allografts), or they can be made from synthetic materials, commonly PTFE (Polytetrafluoroethylene). Xenografts and allografts can have serious complications such as aneurism (rupturing of vessels), calcification (hardening of vessels) and thrombosis. Synthetic biomaterials are also prone to these complications and can also change in size due to blood pressure or cell growth inside the graft. Patient specific vascular grafts are the latest in grafting technology and take 6-9 months to produce. These grafts are formed by seeding autologous bone marrow cells onto polymer scaffolds, or by expanding fibroblasts and endothelial cells in a culture. These methods usually produce sheets, which are then rolled around stainless steel into tube structures of varying diameter. The inner cell layer of the tube structure is dehydrated and seeded with endothelial cells from the patient. This procedure can cost upwards of $15,000. [3]

There are many different kinds of grafts produced by different companies. Some are listed below.

Cytograft – Produces the LifelineTM vascular graft using sheet-based tissue engineering to culture fibroblast cells, promoting production of collagen. Once enough collagen is produced, the sheets are strong enough to be rolled into varying sized grafts. Growth is finished in a bioreactor. [8]

Bionova – Produces Ominflow II, a biosynthetic vascular graft used as a patch. This graft is produced from cross-linked collagen with a polyester mesh endoskeleton. The graft produced has radial elasticity similar to natural vessels and exhibits excellent biocompatibility, reducing infection and other complications. [9]

Gore – Produces Propaten, a vascular graft that uses the anticoagulant properties of heparin. This graft uses a bioactive surface to anchor heparin to the vasculature. This allows thromboresistance, while retaining the bioactive properties of the graft. [11] 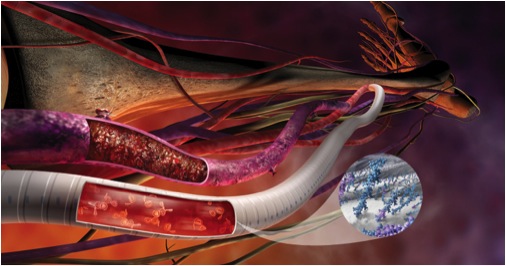 Electrospinning is a relatively inexpensive way to produce scaffolds for cell seeding. Polymer solution is drawn into a spinneret and charged with large electric potentials. Polymer is then injected through the electric field, and as solvent evaporates fibers are created. Size of the fibers can be manipulated from 50 nm to 10 um by mandrel RPM or solvent concentrations. These nanofibers can be manufactured to regulate the microscopic mechanics of the scaffold, which translates to increased cell differentiation and proliferation. These engineered grafts also exhibit increased functional longevity. Polymers that can be used for this application include: Polylactic acid (PLA), Polyurethane (PU) and polycaprolactone (PCL). Electrospun nanofiber scaffolds can be manufactured into vascular grafts in one step, with living cells being seeded into the fibers as they are made. This method decreases the time needed for biofabrication of patient specific vascular grafts. [12]

Cells can have magnetic iron oxide nanoparticles attached inside them, allowing them to be driven by magnetic forces to a desirable location. This technique has been used to seed endothelial cells onto PTFE scaffolds for vascular grafts. These cells remain healthy and the magnetic forces used accelerate proliferation, adhesion and monolayer assembly. The cells are also visible through magnetic resonance imaging (MRI), which allows for noninvasive monitoring of vascular grafts.[12]

[5] "Pioneers in Kidney Dialysis: From the Scribner Shunt and the Mini-II to the "One-Button Machine"" Pathbreakers. University of Washington, 1996. Web. 05 Mar. 2013. <http://www.washington.edu/research/pathbreakers/1960c.html>.