the location of the spleen

The spleen plays an important part in both the circulatory and immune system. The most popular method of treating spleen-related problems such as a ruptured spleen or splenic cancer is by partial or complete removal of the spleen (Splenectomy). The spleen’s ability to regenerate allows those who receive partial splenectomy to regrow the spleen, however, those individuals who receive a full splenectomy do not. Unfortunately, the spleen is viewed as a non-vital organ and therefore many patients who undergo full splenectomy do not receive a replacement organ, which in turn increases their susceptibility to various complications such as the fungal infections and septic shock. The susceptibility of the patients to blood-related illness poses a continuous threat which lead to frequent visits to the hospital if they do get infected. Furthermore, since blood-related illnesses are commonly caused by bacterial agents, the patients must be put on antibiotics which can lead to the development of multi-drug resistant pathogens. The labeling of the spleen as non-vital appears to have impact on research as well. Not as many investments are made toward tissue-engineering spleens as are made to the more necessary, vital organs. 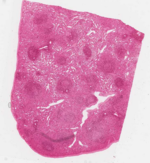 Red and white pulp regions of the spleen

The spleen is made of various compartments and contains numerous enzymes and molecules to aid its functionality. The spleen consists of two distinct types of tissue, red and white pulp. Red pulp is made up of venous sinuses and splenic cords, which are responsible for its hematologic functions, while white pulp is mainly lymphatic tissue, which are responsible for its immune related functions [3]. One group of molecules stands out from the multitude of molecules found in the spleen, Opsonin, for its unique purpose in the spleen. Opsonin is any antibody that serves as a biological marker, which encapsulate any antigens passing through the spleen. The Opsonin binds to both the antigen and to the macrophage in order to promote and enhance the immune response.

Basic overview of the mechanism for Opsonin

The spleen has a remarkable ability to regenerate itself if it is damaged as well as the ability to autotransplant elsewhere in the body, a process known as splenosis. During splenosis a damaged spleen can send cells to regenerate in another area of the body. Splenosis does have its short comings as many of the spleens created via these process either lack a certain pulp or lose functionality [2]. Researchers, however, were able to take advantage of this naturally occurring process in order to regenerate the spleen in full splenectomy cases.

The spleen is an organ that plays an important role in the circulatory and immune system. Its major responsibilities lie in filtering the blood by removing old or damaged erythrocytes as well as pathogens. When removing old or damaged erythrocytes, the spleen helps recycle important cellular content such as iron into new blood cell as well as avoiding endotoxin complications that may arise from damaged blood cells. A significant immunological impact of the spleen is lowering the risk of blood contamination and subsequent disorders such as blood poisoning and septic shock. Additionally, the spleen acts as a blood reserve and stores up to a cup of blood in case of emergencies.

One of the major concerns for people who lack a spleen are pathogens that cause and can lead to blood-related disease. The pathogen of most concern is Streptococcus pnuemoniae the bacterial agent responsible for pneumonia. In immunocompromised individuals, such as people lacking a spleen, the bacterial agent can penetrate the blood stream in order to spread throughout the body. S. pnuemoniae is of such high interest because of its common rate of infection and the bacteria’s fatal ability of inducing sepsis conditions, such as septic shock. Without the spleen, immune response can be delayed or not occur, which may result in death. Additionally, without the spleen the only course of action is the usage of large amounts of antibiotics, which may result in a multi-drug resistant strain.

The functionality of the spleen from partial splenectomy as opposed to the spleen slice method has been challenged, but research suggests that it is the most successful at restoring the spleen. While this should be kept in mind, it is important to note that other techniques are geared towards individuals who must receive a full splenectomy.

Spleen slicing occurs strictly in vivo and relies on the spleen natural ability to regenerate through the same mechanism as splenosis. The spleen slices may be introduced to the subject’s body where the spleen is located or in an omental pouch, which is a space that is produced surgically in the omentum (abdomen) close the where the spleen is usually found. Since it can only be done in vivo the process of spleen slicing tends to be a difficult process to monitor as far as the development of the new spleen, as it might not occur, and functionality assessment. There is no way to guarantee that the right portion of either pulp, or any at all will be created in the subject. The developmental and functionality results can only be accomplished by harvesting the organ.

Spleen that developed from: Tissue engineered spleen (A) and spleen slice(B), harvested after 16 weeks of transplant

Tissue-engineered spleen is relatively new and innovative. In this procedure the spleen is grown in-vitro on a polymer scaffold using stem cells. Unlike spleen slice method the development of the spleen can be monitored by researches, such that both tissue types could be observed and evaluated. However, like the prior technique, complete functionality must be tested in-vivo and results can only be procured by harvesting the organ. It has been demonstrated that the size of the tissue engineered spleen is much larger in rodents after 16 weeks of transplant. One way of testing the development and functionality of the spleens is to expose the subjects to an infection that will be difficult to survive without a spleen, this test was done on groups of mice which had a tissue-engineered spleen (TES) and spleen slice operation [2]. 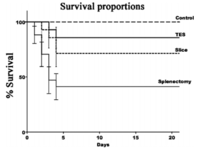 Survivability of rodents exposed to S.Pnumoniae after different treatments

The newest alternative involves connecting an artificial spleen-like device to the patients. This extraordinary device relies on Nano-magnets to function as opsonic molecules and filter pathogen and old/damaged erythrocytes from the blood. The magnets are coated with mannose-binding-lectin, an engineered human opsonin that captures a multitude of pathogens. Once the magnets are attached to the antigen of interest, they are filtered out through a compartment which relays on saline solution flow and an external magnet to carry out the nano-magnets. The complications with the device; however, is that it remains external, therefore, people must be first diagnosed in order to be qualified. Secondly, the device can only affect agents that are in the blood stream at the time of use, this means that any pathogens that have settled inside an organ could not be accounted for. Furthermore, the coating has a broad range of targeted pathogens, but not all pathogens could be captured.

In the future researchers hope that more attention will be directed towards understanding the mechanisms and steps that take place when a new spleen is introduced into a patient’s body. The information of the dynamics between the host and the transplanted organ will allow for scientists to create a functional spleen with the correct ratio of the white and red pulp regions. Researchers hope that more attention will be directed toward the in-vivo oxygen diffusion limitation of engineered solid organs so that a procedure would be developed in order to counter the harmful effects.
Nano-magents seem to be promising and researchers hope that the treatment will be available in the future for people. Additionally, researchers hope that advanced human opsonin will be engineered so that all human pathogens could be targeted. Lastly, scientist are working for the use of nano-magents in other biologically related fields.