Diabetes is a disease in which the body does not properly produce and/or use insulin. Insulin is a hormone that is necessary to convert food, particularly sugar, into energy accessible for the body. There are two main types of diabetes: type 1 and type 2 [23]. Type 1 diabetes is commonly known as juvenile-onset diabetes, and as the name suggests, usually affects children. Those with type 1 diabetes are insulin-dependent, and need a reliable source of insulin in order to survive [23]. It is an immune disorder in which the insulin-producing beta cells in the pancreas are attacked by the body itself, rendering the pancreas incapable of producing enough insulin, which creates a build up of glucose in the blood. This accumulation of glucose wreaks havoc on all organ systems unless the diabetes is treated quickly and properly. Type 1 diabetes cannot be prevented [26]. Type 2 diabetes is caused either by the body’s inability to produce enough insulin or the cells inability to properly use the insulin, often called insulin resistance. This causes a dangerous and damaging accumulation of glucose in the blood. Type 2 is commonly known as adult-onset diabetes and, unlike type 1, may be prevented or delayed with lifestyle changes such as weight loss, healthy diet, and exercise [23]. A staggering 29.1 million people in the US have diabetes, adding up to an estimated $245 billion in annual expenses in 2012. Untreated or mismanaged diabetes may result in blindness, kidney failure, heart disease, stroke, loss of limbs, and of course death [25]. Type 1 and Type 2 diabetes are currently treated with insulin injections via a pump, syringe, or pen. Type 1 patients must administer insulin throughout the day, starting with one or two injections in the morning, but type 2 patients may only need insulin with meals or as necessary. Blood glucose levels must be monitored throughout the day and especially before and after meals. These methods of insulin administration and blood glucose level monitoring are not only inconvenient for the patient, but allow for error that could be deadly [23]. Islet cell transplantation may be beneficial in treating patients with type 1 diabetes, as it replaces or supplements their own insufficient pancreatic cells with healthy ones [15]. The use of an artificial pancreas is mostly studied in patients with type 1 diabetes, but has yet to be tested clinically for long-term use [11]. 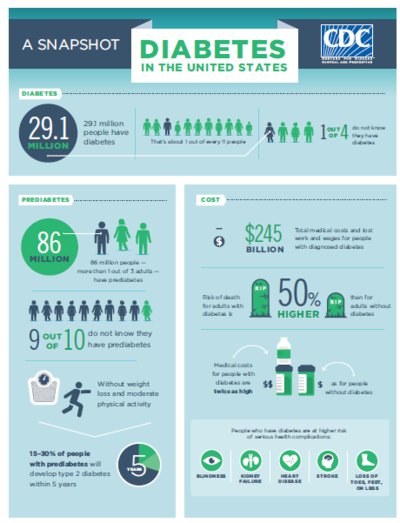 An artificial pancreas is a system, whether living or non-living, that is mainly used to treat diabetes mellitus by releasing insulin into the bloodstream in response to changing blood glucose levels. Current methods of insulin administration such as insulin injections do not mimic natural insulin release by the pancreas within the body. A healthy pancreas continuously measures changes in blood glucose levels, and releases small amounts of insulin in response to these changes. Current insulin injection methods involve administration of large doses of insulin at a time, leading to imbalances between blood glucose and insulin levels. Thus, a successful continuous “closed-loop” insulin delivery system design will greatly improve current methods of diabetes treatment. Insulin pumps have been a topic of study since the 1970s, and new models are coming closer to achieving natural insulin release[15]. Artificial pancreases have been tested clinically, but further research must be conducted in regards to issues such as successful insertion of the pancreas into the body, safety, and long-term adverse effects. Likewise, islet cell culture therapies have shown some success in diabetes treatment, and remain the primary focus of future studies in diabetes treatment [17].

A general overview of the history of diabetes treatments leading up to modern areas of research includes the following:

• 1935-Roger Hinsworth discovers the difference between type 1 and type 2 diabetes [15].

• 1930s to 50s-new types of insulin improve treatments for various types of diabetes [15].

• 1961-The single use syringe is invented, greatly reducing pain caused by injections and eliminating the need to sterilize a needle for injection [15].

• 1969-The first portable glucose meter is created, enabling patients to test their own blood glucose levels [15].

• 1990-For the first time, nine patients are treated with human islet transplantation [22]. 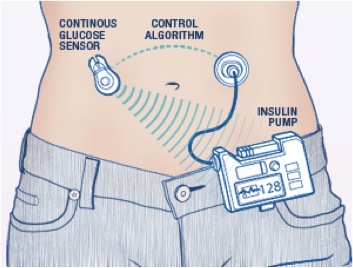 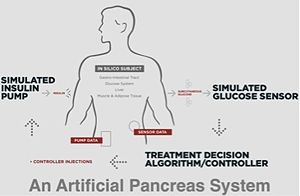 Islets of Langerhans are regions in the pancreas that contain endocrine cells that produce the hormone insulin. Patients with type 1 diabetes may benefit from islet cell transplants because the cause of their diabetes is damaged, inefficient, and/or lack of insulin-producing pancreas cells. Islets of Langerhans are comprised of four different cell types that produce the following hormones: glucagons (α cells), insulin (β cells), somatostatin (δ cells), and pancreatic polypeptide (γ cells). The release of glucagon by α-cells, combined with the release of insulin by β-cells, allows the pancreas to continuously monitor and stabilize blood glucose levels [26]. In an islet transplantation procedure, islet cells are taken from the pancreas of a patient or suitable donor, cultured in a lab, and subsequently transplanted back into the patient, usually to the liver [26], [20]. The transplantation is performed using a simple catheter, which is inserted into the portal vein of the liver [26], [20]. Islet cell aggregates travel into small capillaries throughout the liver, where they become “stuck” due to size limitations [20]. There, the cells act as they normally would in the pancreas, releasing insulin (and glucagon) in response to changing blood glucose levels [26], [20]. Since insulin secreted from the pancreas normally travels to the liver, the liver has been shown to be the most suitable location for islet cell transplantation [20].

In vitro research is conventionally conducted in a monolayer cell culture, but with new the development of micro- and nano-technologies, many microengineering methods have been developed to construct three-dimensional islet models. These models better mimic islet cells in the pancreas in vivo. Microengineered in vitro 3D models indicate potential to provide superior experimental platforms to elucidate islet behaviors under physiological and pathological conditions, such as the molecular mechanisms of diabetes and clinical islet transplantation. These new advances in islet cell cultures should ultimately aid researchers to better understand the behavior of real islet cells and recreate the machinery and behavior in engineered islet cells [20].

Islet encapsulation addresses the problem of immune response rejection of transplanted islet cells. The encapsulation material must meet two important requirements: it must isolate the encapsulated islet cells from the immune system, and it must allow the mass transport of small molecules such as glucose and nutrients into the islets, and of course allow the diffusion of insulin and waste products out of the islets. This encapsulation is designed to limit or eliminate an immunological response to the non-host islet cells. The encapsulation uses an immune-protective biomaterial to create a permselective membrane around a group of islet cells, which is often referred to as a bioartificial pancreas. The membrane allows the islets to regulate blood glucose levels through insulin release but excludes other molecules such as proteins based on their larger size. Several materials, including alginate and ploysulphone have shown promise in effective encapsulation. Alginate is a natural derived from kelp, and is often augmented with materials such as polyethylene glycol (PEG) and ploy-L-lysine (PPL) to increase effectiveness. There are three general methods of encapsulation that have been studied for inslet transplantation: intravascular macrocapsules, extravascular macrocapsules, and microcapsules [15]. 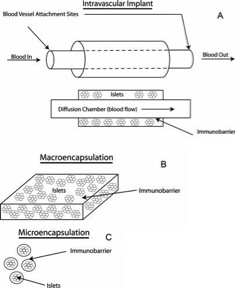 Intravascular implants are perfusion chambers that are directly connected to the vascular system, where blood flows through hollow fibers. These implants allow for adjustable mass-transfer rates but risk damaging blood vessels during implementation. Macroencapsules contain a large mass of islet cells within a diffusion chamber, and are extravascular. They are implanted in the peritoneal cavity and subcutaneously, and are easily implanted and retrieved, but are limited in oxygen diffusion and nutrient transport. Microencapsulation is the spherical encapsulation of single islets, or small groups of islets. Methods of constructing the microcapsules include emulsion, photopolymerization, micro-machined nanoporous microsystems, and electrified coaxial liquid jets. These microcapsules allow for increased oxygen diffusion and nutrient transport, but are difficult to remove if necessary [15]. 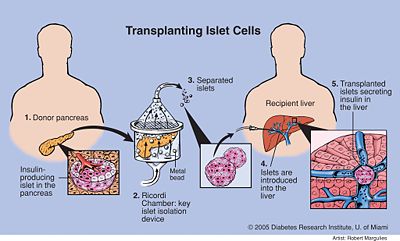 The Hanuman Medical Foundation hopes to create an encapsulated islet cell therapy using a macroscopic islet cell “sheet” release insulin in response to changing blood glucose levels [15]. By using a thin sheet to reduce problems with diffusion, Hanuman hopes to provide an islet cell therapy that enables canines to remain insulin independent for longer than an average of 93 days [15]. Bernard, Lin, and Anseth (2012) have produced a microwell cell culture platform that enables β-cells to form 3D aggregates [17]. Upon further study, they have found that these β-cell aggregates provide more natural cell-cell contact, and that this enables a higher percentage of the cells to remain viable over time [17]. Further studies in this area may lead to sustained viability of transplanted islet cell cultures in diabetes patients.

[9] Diabetes Health, The History of Diabetes. Retrieved from [9]

[15] Leiva-Hidalgo, Alberto de. From pancreastic extracts to artificial pancreas: History, science and controversies about the discory of the pancreatic and antidiabetic hormone, 2011. Spain: Av Diabetol, volume 27, p. 27-38. Retrieved from [15]