Every year within the United States, upwards of 36,000 people die from chronic liver diseases or their complications [8]. Of this 36,000 patients, 17,000 of them are approved for transplants. While there has been an increased number of transplants over the last couple decades, typically 1,500 patients die every year while await a liver transplant [7].

Cirrhosis is the hardening of the liver and development of scar tissue. This may be caused by a range of stimuli, including alcohol abuse, illness, and failure in other areas of the body [10]. While scar tissue in itself is not inherently dangerous, its ability to prevent the flow of fluids (i.e. blood) can prove problematic. This would prove particularly true since the liver functions as a filtration system, metabolism regulator, and protein generator. Complications of cirrhosis include excessive bleeding and hemorrhaging, namely around the portal vein that connects the digestive tract and the liver, hepatic encephalopathy (toxin poisoning), and organ failure (i.e. kidney, pancreas) [10]. While most of these complications may be abstained, a liver transplant becomes necessary once treatment becomes ineffective.

Alcoholic fatty liver disease occurs when an individual undergoes alcohol poisoning on a reoccurring basis. As a result, the vast majority of alcohol abusers develop fatty livers [10]. Not all of them, though, are aware of the disease or only have minor development.

Nonalcoholic fatty liver disease is one of the leading causes of chronic liver disease within the United States [10]. However, it has no determined cause. While it has been found that people who divulge in poor diets are more likely to develop this disease, there is no confirmation that this is the source of the problem.

Hepatitis is the inflammation of the liver commonly stimulated by a virus. While there are numerous strains present in the human body, five prove to be the most prevalent. These are hepatitis strains A through E, with strains A through C being the most common [10]. While all of these strains can lead to liver failure, hepatitis B and C are the most common lines to develop beyond acute inflammation, cause chronic illness, and spread between individuals [10]. If hepatitis develops into a chronic condition without early treatment, cirrhosis or liver cancer may develop.

Hemochromatosis is a primarily hereditary disease where too much iron is absorbed and stored in the body [10]. While this disease does not solely effect the liver, its impact can lead to cirrhosis. This is due to excessive filtering of the harsh mineral as well as potential buildup of the ion within the liver.

Hepatocytes are difficult to harvest. That is to say, when a sample of human hepatocytes is collected and placed into a culture, they tend to lose their liver-specific functionality [5]. As a result, these cells lose their ability to metabolize drugs and other media [1]. If researchers were able to stimulate proliferation of these cells, it would thus prove pointless since the cells would no longer be able to perform the filtration and regulation processes they normal do.

While there are proven ways to form hepatocytes using materials such as growth factors and cytokines, researchers have yet to fully illustrate a signaling pathway that encourages mesenchymal stem cells to differentiate into hepatocytes [6]. The signaling pathway is important because it helps stimulate cell functions like tumourigenesis, apoptosis, and cell-fate determination. In addition, the signaling pathway acts as a resource of information about cell-cell and cell-matrix interactions and regulation. Discovering what mechanisms trigger these responses could help eliminate formation of tumors and unwarranted cell death in newly grown liver tissue. Without the ability to fully demonstrate the hepatocyte proliferation and differentiation process, however, the effective use of mesenchymal stem cells for therapeutic liver disease treatments is limited [6].

Cell Implantation at the Liver

Studies have been done where isolated hepatocytes are directly implanted into the portal vein of the liver. Encouraging results followed, namely for patients who suffer from acute or functional disease [13]. However, this therapy proved to be inefficient for one primary reason: the number of cells that may be transplanted is limited [13]. More than half of the material found within a fully developed liver consists of excess fat or plaque that renders the tissue unusable. Furthermore, injecting a collection of foreign cells could trigger and unwanted immune response, essentially leaving the patient in similar or worse condition than when the implant was first received.

As of the moment, sheets of liver tissue can be produced. An entire liver cannot, however, due to the complex vascularity system present within the tissue. Since the liver is the primarily location for metabolism, blood vessels are spread out in a fashion that ensures every hepatocyte may be used for metabolic processes [2]. This wide spread system is what makes engineering tissues difficult. 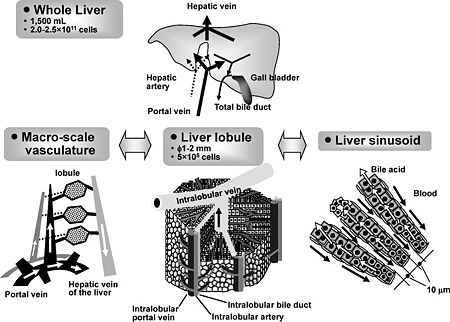 While is it not crucial that engineered tissues perfectly mimic that of an organic liver, it is imperative that the implanted tissue perform the same amount and range of the tasks as the previously healthy tissue [2]. The most important task is to allow the flow of blood through the organ. While techniques that involve engineering 2D layers of tissue and stacking them have become present, forming uniform and well spread channels between these layers to allow blood circulation still continues to be a problem.

Since prior studies have shown complications that accompany direct implantation of hepatocytes to the liver, researchers have started investigating injecting them into extrahepatic areas [5]. Key areas of investigation are beneath the kidney and within the subcutaneous space. These areas were chosen because the kidney proved to be a prosperous place for islet implantation and the subcutaneous space due to its easy access.

The tissues underwent either a two-third hepatectomy or intragastric injection to determine whether or not the injected hepatocytes were proliferating. These tests concluded that not only were the cells growing, but they also existed in quantities relatively close to what was organically found within the mouse [5].

It should also be noted that while both locations manifested a great deal of liver tissue, the location beneath the kidney proved to be more effective. Furthermore, a significant amount of the hepatocytes that were injected within the subcutaneous space had died within the first 2 weeks of study [5]. Thus, further research will need to be done to determine whether or not tissues may be produced in the subcutaneous space. 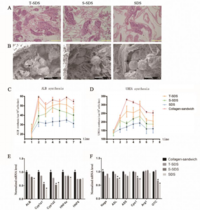 There is research currently being performed to standardize a method of decullarization of porcine livers [4]. Decellurization occurs when an organ or tissue is removed from a donor and the cells are killed, leaving only the extracellular matrix behind to act as a scaffold. This could prove useful because it removes the threat of an unwarranted immune response while leaving behind vascular patterns and biological cues that lead to cell differentiation into hepatocytes [4].

The decellularized livers act as biological scaffolds, ultimately providing a welcoming environment for stem cell adhesion and differentiation [4]. They could then be used to develop autologous liver graphs, allowing for biologically identical tissues to be implanted into an individual. While this has promise of further developing into a commonly practice protocol, it would still act as a temporary therapy for persons awaiting liver transplant.

The latest study has shown a procedure that allows for 70% retention of collagen and glycosaminoglycans (GAGs) when using a sodium dodecyl sulfate (namely T-SDS) solution for decellularization [4]. Furthermore, upon injecting hepatocytes collected from rats into the liver graph of the decellularized extracellular matrix, it was found that urea and albumin production was significantly increased from previous studies. The expression of three out of the five liver-specific genes was also present [4]. This demonstrates that the liver had functionality. Overall, this procedure has promise for in vitro study, but it remains an impermanent solution to the deficiency of livers available for transplant.

Numerous researchers and companies are actively working to try and develop a 3D printed liver that would be available for transplantation. Model livers are currently being printed for operation practices and liver tissue is available in single sheets. This is done by alternating layers of hydrogels and cells, then solidifying the printed object via temperature-controlled properties [2]. But while 3D printing has made extraordinary advances, it has not been able to successfully graph the vascularity of multilayered liver tissue. Once this roadblock is resolved, livers should be readily available at the click of a button.