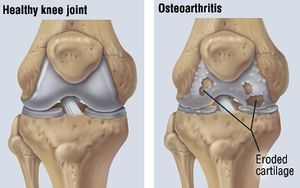 Articular cartilage is the type of cartilage found between joints to reduce friction and act as a shock absorber . Because this cartilage gets so much wear, some deterioration is inevitable. However, excessive deterioration caused by sports injuries, overuse, birth abnormalities, or osteoarthritis can be debilitating. Because cartilage is an avascular area, blood cannot bring nutrients, enzymes, or proteins to injured cartilage. Over 6 million people visit the hospital for cartilage damage every year, and osteoarthritis, or arthritis due to the degradation of articular cartilage, affects 33% of U.S. adults 65 years of age or older [1]. Health care costs related to cartilage damage are staggering. The total annual cost of living with osteoarthritis is $5,700/year per patient [2]. Job-related osteoarthritis costs are estimated at $3.4-$13.2 billion/year. Additionally, hospital related costs for total knee and hip replacements are estimated at $28.5 billion/year and $13.7 billion/year each. These statistics are merely for osteoarthritis and knee/hip replacements; they do not take into consideration various arthroscopic surgeries for cartilage debridement, tear suturing, etc., signifying that he potential market for an effective engineered cartilage is large and undertapped. At the moment, we can repair cartilage but not restore it. The repairs have varying levels of efficiency and varying lifespans. The goal is to one day be able to completely regrow new cartilage that perfectly matches the patient's needs, in size and immunocompatibility. 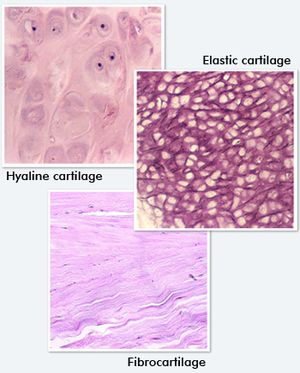 Currently, scientists can easily grow chondrocytes, the cells that make up cartilage, in a lab. The problem is with creating strong enough cartilage to withstand the immense pressures in vivo and with making sure the chondrocytes stay where they are needed. There is also a lack of research showing the effects of time on artificial cartilage function. The avascular nature of the cartilage means that any implanted cartilage must have all of the necessary factors to thrive, particularly in a low oxygen environment; scientists cannot rely on blood vessels to bring oxygen, proteins, enzymes, growth factors, or any other building block. Additionally, while many traditional treatments for cartilage damage do regrow cartilage, the cartilage grown is the wrong type. The type of cartilage needed for articular cartilage is called hyaline cartilage, and it is made of 5% chondrocytes and 95% extracellular matrix, mostly collagen and proteoglycans [1]. The type of cartilage formed by typical treatments is often a hybrid of hyaline cartilage and fibrocartilage, which has weaker mechanical properties.

History of Advances in Cartilage Repair 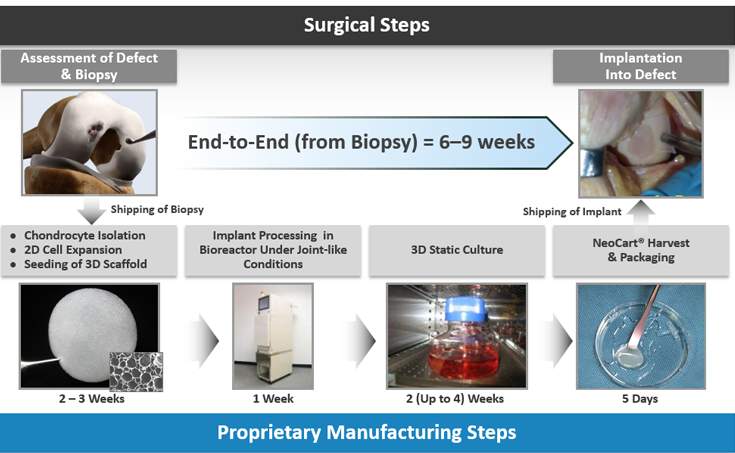 ACI-derived treatments center around injecting chondrocyte cells into patients. These cells have been previously harvested from the patients and grown in culture in a lab before being sent back to be reimplanted. The downside of these treatments is that they require two separate surgeries and some types have restrictions [1]. 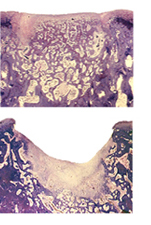 MSC-derived treatments are important, because while autologous chondrocyte use via ACI is an effective treatment, articular cartilage repair requires many cells, sometimes too many to be harvested from other parts of the body. MSCs from bone marrow are the typical choice, as they are easily harvested, have good chondrogenic potential, and are most effective in vivo. To induce chondrogenesis, transforming growth factors, insulin-like growth factos, bone morphogenic proteins, fibroblast factors, varying hydrostatic pressure, varying cyclic compression, etc. can all be used in varying ways and amounts. Going forward, scientists seek to optimize culture conditions for MSC treatments, and to understand the differentiation mechanisms for MSCs. Most of the MSC-based treatments are still in clinical trials, but a few are in the final stages [1].

ESC-derived treatments are nowhere near clinical trials, as ESC experimentation was tied up by political red tape for a long time. However, researchers have found that ESCs are able to form new cartilage with or without scaffolds. In the future, scientists will seek to improve differentiation efficiency and load-bearing aspects of the scaffolds [1].

2014: Columbia University researchers published an article called "Large, Stratified, and Mechanically Functional Human Cartilage Grown In Vitro by Mesenchymal Condensation" in Proceedings of the National Academy of Sciences of the United States of America on April 28th, 2014 [9]. The article presented the labs groundbreaking procedure to induce adult MSCs to form human cartilage for the first time. So far, all treatments for cartilage damage using MSCs have merely stimulated, induced, or injected MSCs as treatment. This finding opens the door to potentially using MSCs to actually grow cartilage to implant in humans. Previous attempted to induce adult MSCs to form human cartilage added adult MSCs to hydrogels and culturing them with growth factors, nutrients, and mechanical loading procedures. However, this attempt nearly always produced mechanically weak cartilage. The researchers from Columbia decided to try to mimic the body's environment at the time this cartilage is biologically formed, so they first caused the MSCs to undergo a condensation into cellular bodies. The findings from this procedure were that, for the first time, the strength and lubrication of the cartilage pieces was very close to that of real cartilage. This is an exciting discovery because it could lead to a future ability to be able to differentiate MSCs into cartilage.

2015: Columbia University researchers published an article called "Gremlin1 Identifies a Skeletal Stem Cell With Bone, Cartilage, and Reticular Stromal Potential" in Cell on January 15th, 2015 [10]. The article presented the prolific lab's findings of a new type of stem cell in mice that differentiates into bone and cartilage, called an osteochondroreticular stem cell, or OSC. It was previously believed that MSCs differentiated into bone and cartilage, but the mechanism was not known; MSC involvement could still be possible, or MSCs and OSCs could be different differentiations from the same line. Mice and humans have very similar bone-forming pathways, so these stem cells will likely be found in humans as well. After adulthood, OSCs only activate upon injury to bone or cartilage; by learning to stimulate the differentiation of OSCs, scientists may be able to cause cartilage regeneration without any injections or in vitro culturing. This essentially complicates all previous research and methods, because if MSCs do not differentiate into cartilage, how have all of the other treatments been working? Much more research is needed to determine the implications of this.