The Actin Cytoskeleton of the Cell by Jeremy Keys 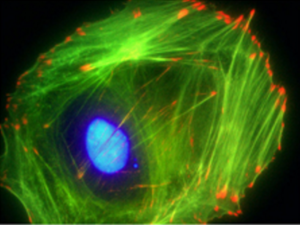 Representations of a. G-actin and b. F-actin. The two colors in G-actin represent the inner and outer domains of the actin monomer. These refer to the relative positions of the ends of the structure when it is integrated into the F-actin helix. Each color within the helical model represents an individual G-actin which has bonded to the filament [3]

The cytoskeleton is an array of proteins in the cytoplasm which forms the structural framework of all eukaryotic cells and most prokaryotic cells. The cytoskeleton is composed of three primary components: microtubules, actin microfilaments, and intermediate filaments. Each of these components provides a specific set of functions to regulate the overall behavior of the cell. Microtubules, composed of tubulin, are straw shaped structures which are approximately 20 nm in diameter and are the largest of the cytoskeletal components. Actin filaments are the smallest of the three components and are composed of a helical strand of actin monomers averaging around 6 nm in diameter. Intermediate filaments are twisted groups of proteins which provide tensile strength to the cell and are 10-20 nm in diameter. Collectively the cytoskeleton works to control cell shape, add structural strength, produce motility, and aid in cell division. 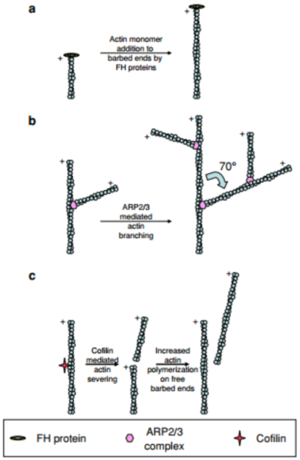 Actin is the most plentiful intercellular protein in eukarotic cells, accounting for 10% of cellular protein in muscle cells and 1-5% in most non-muscle cells. Initially recognized for its role in muscle contraction, actin is a primary component of the cellular cytoskeleton and plays a key role in cell motility, cell division, and cell-surface and cell-cell interactions.

Actin exists primarily in two forms: filamentous (F-actin) and globular actin (G-actin). Under physiological conditions, as much as 99% G-actin will naturally polymerize into F-actin [2]. Actin is often classified among three isotypes: alpha-actin, beta-actin, and gamma-actin. Alpha-actin is found primarily in muscle cells, being responsible for muscle contraction along in cooperation with myosin, while beta-actin and gamma actin are regularly associated with the cytoplasm of non-muscle cells. In addition to these three isotypes, there are numerous small variations on actin structures between organisms. While there is relatively little diversity among actin's isotypes, actin can observe a broad array of behaviors due to its interactions with actin-binding proteins (ABPs). As over 150 ABPs have been identified (which accounts for 25% of cellular proteins), actin's functions within the cytoskeleton are very diverse.

Filamentous actin is a polar structure which has a negative (or sharp) end and a positive (or barbed) end. Polymerization almost entirely occurs at the positive end of the filament. This polarity is what drives forward motion of the cell. The role of actin binding proteins on polymerization also has a significant impact on how quickly a cell is able to move. Actin related protein complex 2/3 (ARP2/3) is an actin binding protein which causes a branching of the actin filament at each of its binding sites [4]. By branching the actin, a second barbed end is formed and therefore the polymerization rate may be doubled provided there is enough G-actin available. Cofillin is another actin binding protein which produces a similar effect by splitting the polymer in half, thus producing a second barbed end and increasing the polymerization rate [4].

History of the Actin Cytoskeleton

While actin’s presence in muscle cells was understood as early as the late 19th century and the idea of a structural framework for cells was proposed as early as 1903, the role of the actin in the cytoskeleton of eukaryotic cells was not well understood until the advent of fluorescent labeling techniques in the early 1970s. A brief summary of key discoveries regarding the actin cytoskeleton include the following:

The most significant role of the actin cytoskeleton is its ability to control cell locomotion. Cell motility is driven by the rapid polymerization of actin filaments at the front of the cell coordinated with the gradual disassembly of actin filaments towards the cell rear. Polymerization at the front of the cell, which is driven by Rho GTPases, causes a large forward protrusion of a “lammelipodium” [2]. The lammelipodium is formed as forward extension of actin proteins stretches out the cell membrane. Smaller, finger-like protrusions called “filopodia” then form focal adhesions with the substrate beneath the lammelipodium [6]. As the extended actin begins to retract toward its rear, tension begins to form in the cell which activates LIM-proteins to aid in the “bundling” of actin filaments to form stress fibers [6]. As these stress fibers are formed, the cell begins to retract and focal adhesions at the rear of the cell begin to detach as the whole cell body is pulled forward. 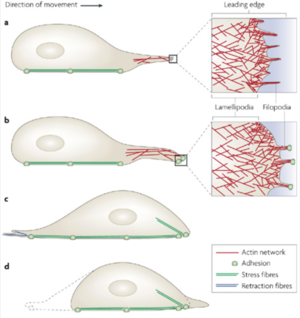 a) The lammelipodium is formed as accelerated polymerization at the front of the cell pushes the membrane forward. b) Filopodia form focal adhesions at the substrate surface. c) The actin filaments reorganize into bundles to act as stress fibers as tension in the cell increases. d) The tension in the cell body breaks focal adhesions at the cell rear as the whole cell body is pulled forward

Metastasis, or the spread of cancer from one location of the body to another, is dependent on the ability of its cells to migrate throughout the body. In order to accomplish this, cancer cells are highly reliant on the cytoskeletal processes of motility in order to intravasate (or invade) other tissues. It has been demonstrated in some strains of breast cancer cells that the production of ARP2/3 and cofilin are upregulated while Eva/VASP proteins are shut down [4]. Eva/VASP proteins are associated with the formation of filopodia. Therefore, these cancer cells effectively increase the rate of polymerization to push forward lamellipodia faster, and eliminate the formation of filopodia in order to increase the surface area which the front of the cell attaches to; each of these results in a much faster moving cell. While not all cancers modify the regulation of the cell's motile mechanisms in the same way, many change these structures in some way in order to improve their chances of survival and spreading.

In addition, cancer cells hijack the ability to form actin-driven protrusions in order to form specialized protrusions called "invadopodia" [4]. Invadopodia are crucial for metastasis because they push into the surrounding extracellular matrix (ECM) to open up holes, and also work to break down the ECM [4]. For cancer cells which are contained in otherwise isolated regions of the body, the formation of invadopodia are their means of spreading into other tissues.

(Left to Right) A human breast cancer cell is shown with its stress fibers and lammelipodium labeled. Note the lack of filopodia protruding from the lammelipodium. In the center, a colon cancer cell displays a unique pseudopod structure with concentrated actin structures towards its end. An endothelial carcinoma cell shows numerous filopodia extending away from its cell membrane. Such an adaptation could be useful for latching onto other tissue cites in the body if it were to find its way into the circulatory system. [4] 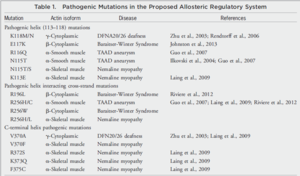 Mutated actins have been associated with muscular dystrophy and other myopathies since 1995 [5]. Alterations to actin structures can have adverse impacts on cell contractility, binding potential with myosin, cell motility, cell division, and cell strength, among other factors [7,8]. Each of these defects can manifest itself as dystrophies, atrophied muscle, developmental defects, mental disabilities, and numerous other illnesses [7]. Notably, associations between cardiomyopathies and muscular dystrophy have come under investigation for potential treatments.

In 2013, a group of researchers in New South Wales, Australia led by Dr. Peter Gunning and Dr. Justine Stehn completed several successful animal trials of a drug which targets tropomyosin, an actin binding protein associated with motility, in tumor cells [9]. By affecting the cells motility, the ability of tumor cells to seek out nutrients and spread throughout the body is significantly reduced, ideally leading to the cells starving themselves. The drug, named TR100 was slated to enter human trials in a group of 12 children suffering from advanced neuroblastoma in 2015. An advantage of the drug is that it is potentially applicable to many types of cancer because it targets structures which is necessary for all cancer cells to thrive.

Drugs which target the cytoskeleton in cancer cells have been investigated in the past, but the difficulty with such drugs is controlling them in such a way that they exclusively impact cancer cells. Tropomyosin is critical for the function of many cells in the body, particularly in skeletal and cardiac muscle. It is for this reason that most researchers have not continued investigation of targeting cancers in this manner [9]. The researchers have stated that they will be closely monitoring the muscular and cardiac health of their patients, however it was notable that these negative side effects were not observed in their animal models. [9]

Genetic defects to actin which cause dystrophies have had no comprehensive treatments in the past, however recent mouse trials utilizing adeno-associated virus (AAV) delivery were successful in recovering the missing gene necessary for the formation of dystrophin (actin binding protein which is missing in patients suffering from dystrophy) [10]. If these processes can be shown to continue to be successful, gene editing could represent a major change in how dystrophies are treated.

Gene editing has faced considerable controversy due to its potential applications outside of treating disease. Specifically, many are concerned with the ethical ramifications of a tool which might be used towards "improving" humans; treating conditions or modifying ones genes in order to reach a biological ideal. These, of course, have associations with ideas such as eugenics which has put the idea of gene editing under scrutiny.

Other factors impacting gene editing's success include a group of 3 deaths which occurred during human trials of gene editing treatments between 1999 and 2007. While there is some debate over whether or not all of these deaths were actually a result of the treatment, skepticism towards its viability as a treatment has risen.