From OpenWetWare
(Redirected from Team:Chiba/Project)
Jump to navigationJump to search

We are constructing delay switches to control/preset the timing of target gene expression. Our project uses two classes of bacteria: senders and receivers. Senders produce signaling molecules, and receivers are activated only after a particular concentration of this molecule is reached. The combinatorial use of senders/receivers allows us to make a‘switching consortium’which activates different genes at the preset times.

As signaling molecules, we utilize molecules associated with Quorum sensing, a phenomenon that allows bacteria to communicate with each other. Although different quorum sensing species have slightly different signaling molecules, these molecules are not completely specific to their hosts and cross-species reactivity is observed (1),(2). Communication using non-endogenous molecules is less sensitive than the original, and requires a higher signal concentration to take effect. This reduced sensitivity results in the slower activation of receivers, thus creating a system in which different receivers are activated after different amounts of time following signaling molecule release. 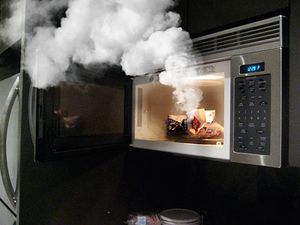 Fig. 1 Burnt popcorn. He could have prevent this if he properly preset the timer...

Many electronic devices we use in our daily lives have the ability to keep track of time. For example, a VCR is able to record a TV program at a pre-set time, and a microwave automatically stops heating after a set amount of time. automatically stop heating when the right time comes. Using these temporal pre-programming functions, we have been liberated from either staying up late to watch a European soccer game or from worrying about our popcorn being burned black while yelling and shouting to the match we have videotaped. In this way, the timer function has revolutionized our lifestyle.

We thought the same applies to the biotechnology; we would like to freely implement the 'timer switches” to various biological functions, preferably both independently and in parallel format. These “functions” include sensors, synthesizers, or degraders of bioactive compounds/ materials, transportation and secretion machineries, communications, getting/ sticking together, proliferation and cell death. If successful, we will be able to program exceedingly more complex complex behaviors in cellular systems.

File:Chiba lifestinks.gif
Fig. 2 Temporal imaging system. You can display secret message only for a short period of time. (reload to replay)

As one of the thousands of possible applications, we are trying to construct a metamorphosizing image using E. coli 'ink' that differ not in color but the 'timing' at which they are a certain color (fig2). Over time, parts of images (or characters) are getting visible one by one, making animated message/ picture. If the coloration process proceeds to completion, the message is obscured. Only when the message is observed at the correct timing during the coloration process is any useful information obtained. Such a system should be useful for communication security: we can convey our message to only those that know the exact moment they should take a look. After a while, the message is gone and cannot be retrieved. 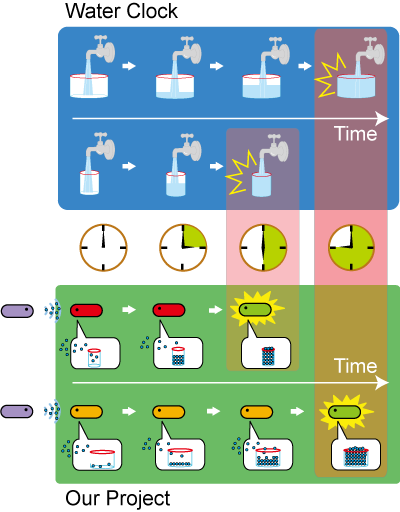 We designed a switching consortium that works like a water clock (Water clock-wikipedia.en). Here is how it works (Fig 3).

2. Receivers detect the signal molecules and then activate the genetic switch to the on state, but only when the signal concentration reaches the switching threshold of a receiver. Receivers are activated by different signaling molecules at different rates. In this way, the entire system behaves like a delay switch sequence.

3. Either by changing the receiver sensitivity or rate of signal accumulation, one can freely control the delay length of the individual switches. Using switches with various times-of-delay, one can sequentially activate many different cellular functions.

In this project, we use acylated homoserine lactones (AHLs), signaling molecules used for quorum sensing in gram negative bacteria. Senders express LuxI or similar enzymes, which catalyze the production of AHLs, under the control of a constitutive (Tet) promoter. Each cell thus generates AHL more or less at a constant rate. AHL can freely permeate cell membranes and are detected by neighboring cells. Receivers constitutively express LuxR proteins (or a similar ortholog), the protein that detects AHL concentrations. When AHLs bind LuxR proteins, the AHL-LuxR complex activates the Lux promoter. The threshold [AHL] at which switching occurs is determined by the affinity of AHL for the particulr LuxR ortholog.(3),(4). (more about quorum sensing)

In principle, there are three ways to delay the activation of chemical communications;

Inter-species communications! We decided to go for the strategy inspired by Japanese-classic experience; Whenever we speak to somebody in English, we often experience a certain delay in activating the communication. We though this is exactly what we pursued in See Exp #4.. Same applies to the reverse, too. When somebody speaks to us, we definitely need some time (sometime infinite) to get activated. This is all in spite that he/ she was loud and clear enough. The less affinity (perception) we have to English, the longer we need to activate them.See exp #5.

Fig.4a Flower should have blossomed!!!
Leaves, a stem and a flower was drawned with BBa_T9002, T9002-p15A, and AiiA Receiver, respectively on the plate containing BBa_S03623 (AHL sender)--->more about Temporal imaging system Demo experiments detail

In conclusion, we tried (and are trying) to device a series of delay-switches by designing the "switching consortia". We got limited, by certain success in generating delay switches.

One of the technical challenge of our project was that the reporter genes are quite slow by itself to develop readable signal. There are significant time-lag between transcription initiation and the time the reporter start emitting the signal. We have screened many different reporters including lucifeases, lacZ, and other fluorescent proteins. With our experimental setup, they all looked more or less the same level (some were in the range of 30-60 mins in microscope, but all needed 90-120 mins to get visible by eye). For more precise PoPS analysis, we should have conduct blotting analysis, instead of fluorescent analysis.

Biological timer was previously designed by Missouri Miners (2007). In their system, they feed arabinose (input signal) to the bacteria, which consume the signal molecule. Upon eating up the molecule, the bacteria will generate GFP, signaling that time is up. This system is clever in that one can freely set the timer by adjusting the amount of arabinose fed to the cells. Our approach is more to make a series of timers. Obvious drawback of this approach is that we have to make new timer for each and every applications. Good thing about our system is that once created, we can run several timers simultaneously in a single pot; Combinatorial use of biological timers with different delay time would allows us to sequential switching of various genes, enabling more sophisticated control of the biological processes.