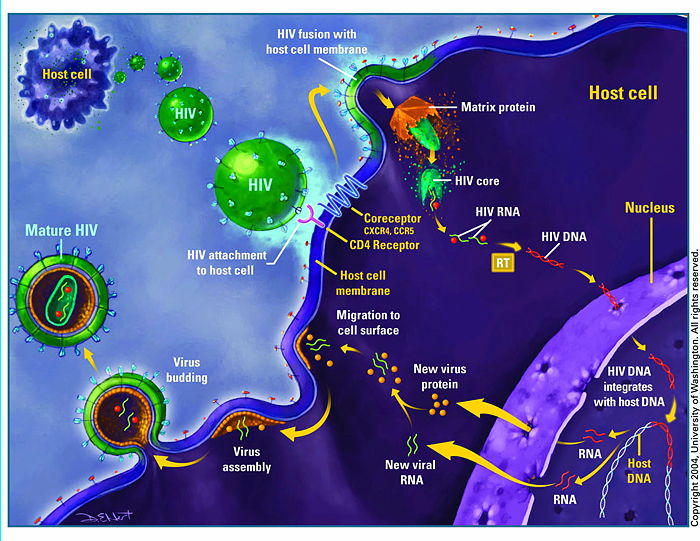 Persons infected with HIV are at increased risk for all cancers known or suspected to have an infectious cause, an effect believed to be primarily mediated by lowered host immunity via the depletion of CD4(+) cells. Whereas Kaposi sarcoma and non-Hodgkin lymphoma were recognised as AIDS-defining illnesses early in the HIV epidemic, the influence of declining CD4(+) count on other infection-related cancers has taken longer to establish, undoubtedly because the association is weaker and the dose-response relationship is less steep. However, following improved survival made possible by combined antiretroviral therapy, declining CD4(+) count starts showing an impact on the natural history of various carcinogenic infections and on the risk for an increasingly wide range of cancers, including Hodgkin lymphoma, cervical, anal and liver cancers. (Clifford GM, Franceschi S., Future Oncol., 2009)

The incidence of NHL (non-Hodgkin lymphoma), a disease of malignant lymphocytes, is increased in the HIV-infected population. While the advent of HAART highly active antiretroviral therapy has decreased the occurrence of NHL in HIV-infected individuals, the risk of developing NHL is still ∼60 times greater than in the noninfected population, making ARL (AIDS-related lymphoma) one of the most common AIDS-defining cancers in HIV-infected individuals. Additionally, little change in morbidity as a result of ARL has been observed in HIV-infected patients. Since the introduction of HAART therapy and the resulting immune reconstitution in HIV patients, the epidemiology of AIDS-related cancers has changed. For instance, the incidence of CNS lymphoma has dropped to nearly one-tenth the level observed in the pre-HAART era. The incidence of KS (Kaposi sarcoma) has also decreased dramatically, suggesting that immune reconstitution has had a large effect on preventing these AIDS-defining cancers. In contrast, the occurrence of ARLs has not declined to the same extent. Although HAART therapy has been reported to decrease ARL incidence by almost 50%, there has been little change amongst the various CD4 strata. The greatest difference between lymphoma in non-HIV and HIV-infected individuals is that ARLs are usually high-grade and aggressively metastatic, with death occurring in as little as 2 weeks after diagnosis. ARLs predominantly present as systemic NHLs with frequent involvement of extranodal sites, including the gastrointestinal tract, liver, and bone marrow. Approximately 80% of ARLs arise systemically, and the remaining cases arise within the CNS. These systemic, high-grade ARLs are primarily of B cell origin and are usually histologically classified as either large cell lymphoma (variants include centroblastic, immunoblastic, and anaplastic), Burkitt lymphoma, and primary effusion lymphoma. During the pre-HAART era, it seemed certain that ARL occurred primarily as a result of HIV replication-associated immunosuppression. However, due to HAART, this disease would be seen much less frequently if immune suppression alone were the cause for the lymphoma or only occurred in a subset of individuals who are intolerant of HAART. Since the molecular studies performed on ARL tissues to date have shown that HIV is not inserted within malignant B cells, it has been suggested that HIV contributes to ARL incidence through indirect mechanisms of immunosuppression and genetic abnormalities due to EBV infection, HHV-8 (human herpesvirus type 8) infection, c-MYC and BCL-6 rearrangements, RAS mutations, p53 inactivation, and 6q deletions. Additionally, ARL onset is often preceded by an overproduction of B cell stimulatory cytokines, resulting in B cell activation and possibly, activation-induced cytidine deaminase-associated DNA modification errors and oncogenic translocations. (Leanne C. Huysentruyt and Michael S. McGrath, J Leukoc Biol, 2010)