Surface acoustic waves (SAWs) have a very diverse range of application with everything from electronic devices to radio transmitters to microfluidics. They operate by sending physical acoustic waves, powered by an electrical signal. These SAWs are coupled in parallel with piezoelectric materials to facilitate the transfer of physical interaction with electrical signal [2]. This allows for both the application of transmitters and receivers based upon the change in physical deformation of the waves. SAWs were first discovered in 1885 by Lord Rayleigh and are as such known as Rayleigh waves [3]. First being known as the transfer of acoustic waves across a solid surface, SAWs have since been utilized across all material phases for unique applications.

SAWs are extremely useful in the still developing world of microfluidics.

The kinetic energy created by surface acoustic waves serve as great modes of transport for the micro-scale environments of microfluidic devices. SAWs can be used to facilitate fluid velocities of up to 10 cm/s in microscale channels [6]. This is more flow then would ever be needed in a microfluidic device, but it shows the capabilities these waves have. They induce flow through the pushing motion of the waves created [6]. The Rayleigh waves even have unique uses of inducing channel like flow in open systems [ 5]. Modulating wetting properties of a planar piezoelectric chip allows for droplets to form and travel along specific paths in open systems. The piezoelectric channels create the SAWs which form the droplets and propel them forward [5]. This is extremely useful as SAW devices can be used in open systems as well as inducing microscale droplet environments.

Figure 2 amplitudes of the waves as recorded by the electrical sensors. The sensors detect the difference in time between the waves as they interact with the environment.

Due to the known geometric shape of Rayleigh waves and their piezoelectric capabilities, SAWs are very useful as environmental sensors. The SAW transducers send out nanometer scale amplitude waves at known geometries and frequencies [6]. A separate, or the same sensor, then transmits the created wave into an electrical signal. This signal will be changed upon what sort of interaction the wave encounters within its travel. Everything from time, amplitude, frequency, temperature, density, etc. are variables that affect a waves path, and can be measured [2].

One of the most influential utilizations of microfluidic devices are the mixing of droplets [5]. Droplet sized reactions allow for the immediate mixing of reactants and provide much more accurate analysis. By studying a reaction within the volume of a liquid droplet, one could research thousands of different combinations in the time it would take to test one. SAW devices can be implemented into this lab on a chip design to greatly increase the speed of mixing [5]. By changing the frequency of emitted waves, oscillatory flow can be induced into a droplet and cause rapid mixing [6]. Azimuthal recirculation is created within the droplet and allows for nearly instant mixing of a droplet and accurate reaction analysis [6].

SAWs can be utilized to separate particles of varying volume, density, and compressibility [4]. The separation is caused by the isolation of nodal planes within a microfluidic chamber in nearly one-dimensional space. Particles of constant density but varying volumes were observed to move laterally in a channel towards the nodal planes of the waves. This separation of volume was induced by differing axial forces [4]. The same phenomena were also observed in fluid channels with varying density particles. Aggregation of particles within aqueous solutions were easily sorted out depending on their distances from the nodal points [6]. 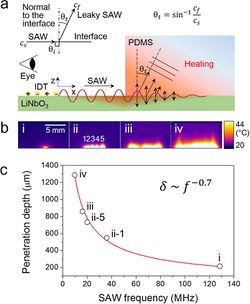 Figure 5 a) the acoustic wave sent over the LiNbO3 substrate is gradually absorbed into the PDMS layer. b) Thermal imaging shows the increase of temperature within the PDMS. c) Penetration depth of the heating as a function of device frequency. 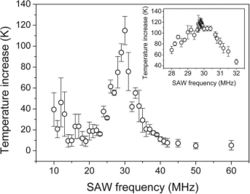 Figure 5 Change in temperature as a function of device frequency. Within the smaller graph, an isolation of the peak shows how sharp of a correlation the two have.

Perhaps the most unique aspect of SAWs in microfluidics is their thermal compatibility with polydimethylsiloxane (PDMS). PDMS is one of the most popular microchannel materials and has a unique property where it undergoes vibrational dampening when hit by sound waves. This dampening causes temperature increases in the material [2]. This heating technique has been recorded to perform at a rate of 2,000 K/s in microstructures [2]. Researchers have also been able to fine tune this technique to a range of 0.1˚C at material thicknesses of up to 500 µm [1]. This aspect allows for very accurate control of biological environments. These microheater devices have been used in a lot of biological environments to safely regulate the temperature of the device and facilitate rapid polymer synthesis. The device is more effective and faster at evenly distributing energy than any typical conductive methods [2]. This specific method has also been used to develop a 134 base pair long DNA amplicon in less than 3 minutes. A feat that has been measured to be a billion-fold increase in natural reaction speed [2].