This page is contributed by Ton Subsoontorn 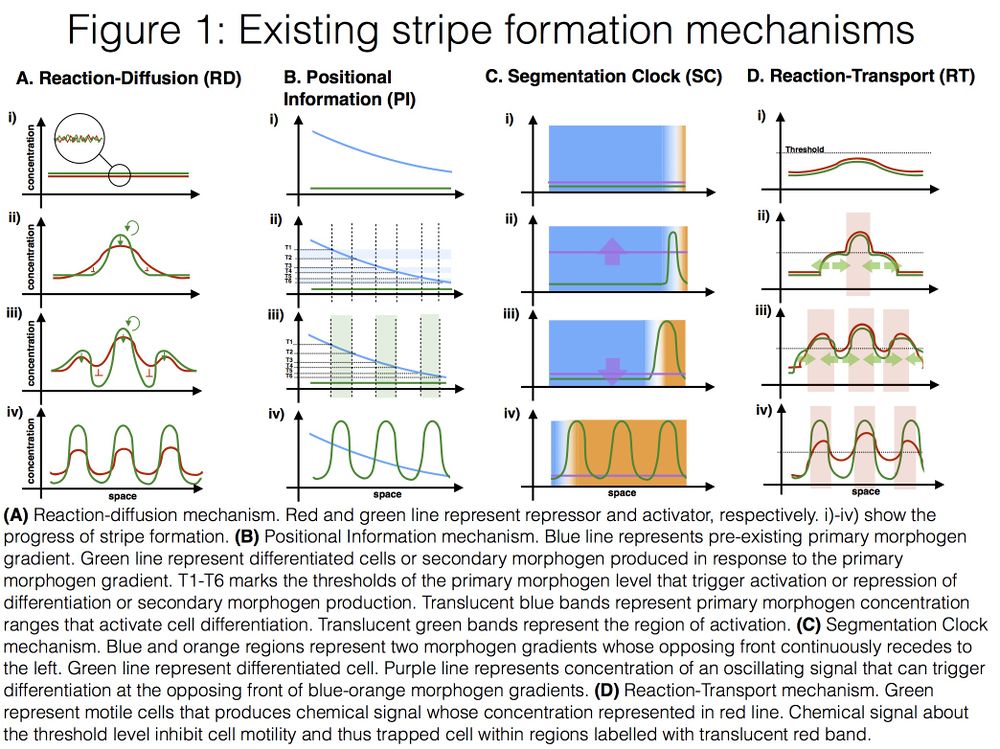 Early theoretical works in developmental biology feature the two archetypes of stripe forming mechanisms: Turing’s reaction diffusion (RD) model [Turing1952] and Wolpert’s positional information (PI) model [Wolpert1969]. RD generates patterns by amplifying local fluctuation of pattern forming agents (e.g. morphogens) (Fig 1A). Reaction kinetics as well as diffusion rate of morphogen determines which fluctuation modes will be amplified and, consequently, which shape and size of pattern will arise. PI generates patterns by having progenitor cells “read” their positions from a global morphogen gradient and differentiate accordingly (Fig 1B). Shape and size of an emerging pattern are determined by how the global morphogen gradient is prepositioned and how cells interpret their local morphogen levels. The same patterns could sometimes be explained by both RD and PI mechanisms [Green2015]. A notable example includes stripe formation in limb bud which determine the locations of digit and interdigit regions [Sheth2012; Miura2013]. It could be difficult or impossible to decide which mechanism is the true underlying process without looking into detailed gene regulatory networks and morphogen distributions. The main difference between RD and PI is that RD can by itself break a symmetry of an isotropic initial condition. On the contrary, PI needs anisotropic initial condition, i.e., pre-existing morphogen gradient that defines the direction and location on the pattern forming domain.