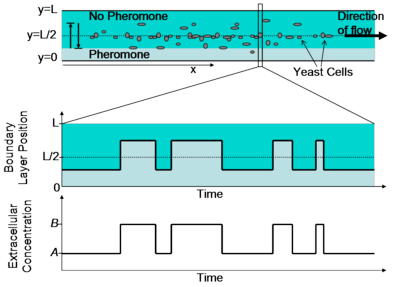 Changing fluid environment of cells fixed in a microfluidic channel

The basic idea of the stimulator is two have two fluids flowing side-by-side (in laminar flow) down a microfluidic channel with cells affixed to the bottom of the channel. By changing the relative flow rates of the two fluids, the position of the boundary between the fluids will be altered. Thus cells near the middle of the channel can be alternately exposed to two different fluid environments. So by chaning the flow rates over time, we can expose the cells in the 'swing region' of the channel (the potion of the channel over which the boundary layer is moved) to a time-varying environment. I'm specifically, the two fluids in my case are media and media+pheromone. See figure on the right.

In order to control the fluid flow rates, I am using technology from Steve Quake's lab at Stanford. In fact, the specific idea for controlling the flow rates came from Todd Thorsen.

The idea is that the two fluids enter the PDMS chip on the left side under pressure driven flow. They then flow through a series of parallel channels, and finaly, the two fluids come together into the main channel on the right. The sets of parallel channels are of varying widths, and the valves at the ends of each of these channels allows the flow to be routed through any of the these channels. By forcing the flow through channels or varying widths, we can control the resistance to flow, and thus the fluid flow rate. 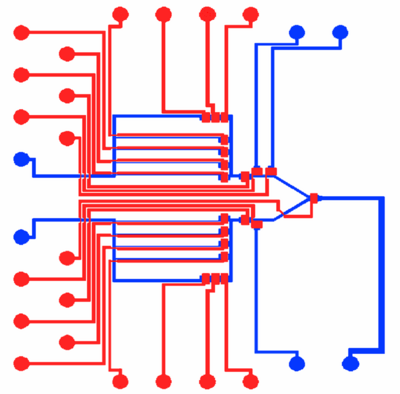