Precutaneous coronary intervention (PCI) is the most frequently performed medical procedure [1]. In the past, PCI was performed using balloon angioplasty. However, ballon angioplasty alone was subject to detrimental vessel closure due to dissection and restentosis [1]. This prompted the development of the stent, a small mesh metallic tube that is inserted within small or weak arteries to prevent vessel closure [2].

Coronary Heart Disease (CHD), also referred to as Coronary Artery Disease (CAD), is the leading cause of death for both men and women in the US [3]. CHD is caused by the accumulation of plaque on the arterial walls, and may also be caused by the hardening of the arteries. Over time, the buildup of this fatty plaque causes the arteries to narrow, which can slow or even inhibit blood flow to the heart. Angina, or chest pain and discomfort, is the most common symptom of CHD and occurs when the heart is not receiving enough blood and oxygen. Shortness of breath and fatigue are additional symptoms. Medical treatments for heart disease, high blood pressure, or high cholesterol in combination with lifestyle changes can treat mild CHD. For more advanced cases, however, surgical procedures such as percutaneous coronary intervention or coronary artery bypass may be required [3].

Angioplasty and Implantation of Stent 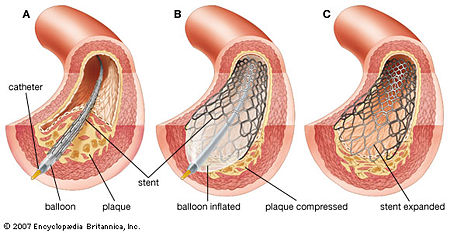 Figure 1. Once the catheter has been maneuvered to the site of blockage [A], the balloon is inflated [B], which deploys the stent. The stent remains open upon removal of the catheter [C] Ref. [3]

An angioplasty is a procedure that restores blood flow to narrow or blocked arteries [2]. In an angioplasty, imaging techniques are used to direct a balloon-tipped catheter into an artery or vein [2]. Once the site of blockage is reached, the balloon is inflated to open the vessel, deflated, and removed. A stent may be placed around this balloon, which is deployed upon balloon inflation and will maintain the opened artery [2]. This balloon can be inflated to different sizes depending on the size of the vessel.

Angioplasty with stenting is initiated when a nick is made at the site of insertion. A sheath is inserted into the artery, into which the catheter is inserted and guided using fluoroscopy to the blocked site. Fluroscopy converts x-rays into video images that the doctors can see [2]. A thin guide wire is used to place the balloon-tipped catheter at the blocked site. Next, the balloon is inflated, which pushes the stent against the arterial wall. The stent remains in place once the balloon is deflated [2]. Following successful deployment, the catheter is removed and bleeding is stopped using pressure. No sutures are needed, although a closure device may be required to seal the small hole in the artery [2].

Angioplasty by itself was an advantageous alternative to bypass surgery and medical therapies for treatment of mild coronary artery disease. However, following an angioplasty, a third of patients developed progressive or refractory angina, which required invasive treatment [11]. In addition, 5% of patients developed acute vessel closure or flow-limiting dissection, and 1/5 of patients required additional procedures over the next 3 years [11]. Therefore, there was a need for a device that could maintain lumen integrity and prevent reclosure of the vessel, which led to the development of the stent.

History of Angioplasty and Stenting

3000 B.C. - Metal pipes are used by the Egyptians in bladder catheterizations [26]

400 B.C. - Hollow reeds and pipes are used as catheters for studying heart valves in cadavers [26]

1711 - The first cardiac catheterization of a horse is conducted by Hales using brass pipes, a glass tube, and a goose trachea [26]

1958 - The diagnostic coronary angiogram is developed by Dr. Mason Sones [26]

1964 - Doctor Charles Dotter introduces transluminal angioplasty, or the concept of remodeling the artery [26]

1980 - 1000 angioplasties are performed worldwide, and guiding catheters are developed [26]

Stents are used to treat stable coronary artery disease, in which a drug-eluting stent is used in conjunction with an antiplatelett therapy [1]. Atherosclerosis, or the hardening of arteries, occurs when fat or cholesterol accumulates on the arterial walls, forming plaques. This is commonly associated with diabetes. Multivessel disease and Left Main Coronary Artery disease are also treated using stents [1].

Bare Metal Stents and their Complications 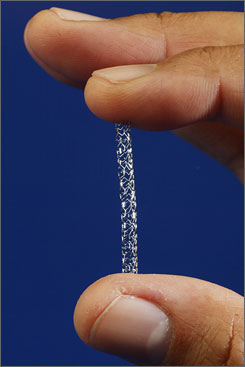 A bare metal stent is simply an expandable mesh 316L stainless steel coil that is inserted into a compromised artery [1]. Although they are still used today, bare metal stents are associated with several severe complications that has prompted the development of drug eluting stents. One of the major problems with bare metal stents is the occurrence of neointimal hyperplasia [1,5]. Neointimal hyperplasia is the growth of scar tissue within the stent due to a proliferation and migration of smooth muscle cells in response to strut-related inflammation [5]. This leads to restentosis, or a re-narrowing of the blood veseel, and requires revascularization. Restenosis has occurred in 20-30% of patients treated with bare metal stents, usually within 5-6 months after treatment [1,5,11]. Endothelial injury caused by bare metal stents can also render vessels thromogenic [6]. Thrombosis occurs when a blood clot forms within a blood vessel, and is lethal in 45% of events[9]. In addition, the fibrinoogen layer covering the metal stent surface can induce platelet activation and thrombosis, which must be countered using anti-platelet medicines. Dual antiplatelet therapies consist of aspirin and clopidogrel or plavix, and are administered for 6 - 12 months [6]. 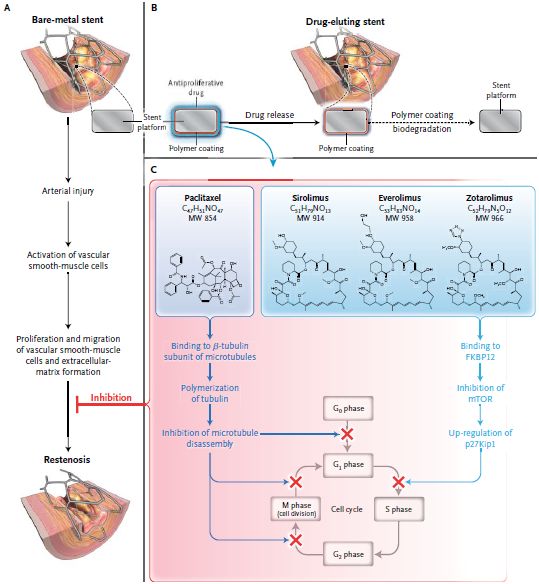 Figure 2. Diagram depicting the four drugs used in stents to prevent neointimal hyperplasia, or the migration of smooth muscle cells to the site of inflammation and gradual narrowing of the artery [1]

Drug eluting stents (DES) are characterized by the controlled release of immunosupressive and antiproliferative agents, which act to inhibit the accumulation of smooth muscle cells [1,7]. These stents were developed to counter restenosis, a complication of their bare metal predecessors. DES's consist of three components: the metal stent, polymer coating, and eluting drug [10]. The polymer coating on the stent enables controlled drug release, and must be biocompatible in order to decrease local inflammatory reactions and thrombosis [1]. In 2012, drug eluting stents were implanted in more than 500,000 patients in the US [1]. Drug eluting stents have been deemed more cost effective than bare metal stents, as the higher cost of these stents is offset by the reduced need for revascularization procedures [10].

First generation DES's are characterized by the timed release of sirolimus or paclitaxel. These antiproliferative drugs reduce revascularization as a result of neointimal hyperplasia. Similar risks of death and myocardial infraction exist as compared to BMS's [1]. With regard to structure, first generation DES's are identical in structure to their stainless steel BMS predecessors, with strut thicknesses of 130-140 μm [20].

Sirolimus, or Rapamycin, was discovered on Easter Island as an antifungal agent [14]. Its antiproliferative properties have enabled its use in cancer therapy and transplant rejection therapy. When eluted from a stent, Sirolimus inhibits the proliferation of smooth muscle cells and leukocytes. The Cypher stent, a Sirolimus-eluting stent, is manufactured by Cordis in Miami Lakes, FL. It is covered by poly-n-butyl methacrylate and releases the drug over 30 days [15].

Paclitaxel, a compound isolated from the bark of the Pacific Yew tree, inhibits microtubule disassembly during cell replication [16]. Like Sirolimus, it is used in cancer treatments and can inhibit smooth muscle cell proliferation. Boston Scientific manufactures the Paclitaxel-eluting Taxus stent, a stent constructed from 316L stainless steel with 132 μm struts and a Transulate® polymer coating [poly(styrene-b-isobutylene-b-styrene)] [16]. Significant reductions in restenosis and revascularization have been obtained with the Taxus stent.

Too much antiproliferation can retard or inhibit arterial wall healing, which leads to chronic inflammation [1]. One study proved that arterial wall healing was incomplete at 180 days with drug eluting stents, where as complete healing was seen with bare metal stents after 28 days [8]. In 2006, the European Society of Cardiology Congress cited stents releasing paclitaxel or sirolimus as slightly increasing the risk of thrombosis [1,10]. Although the occurence of stent thrombosis is rare, the absolute occurence using DES's was nearly double that of BMS's (1.2% Sirolimus and 1.3% Paclitaxel vs. 0.6% Bare Metal Stents) [17,18]. As of today, clinical studies of paclitaxel-eluting stents have ceased, and sirolimus-eluting stents are no longer manufactured [10].

New generation stents release everolimus and zotarolimus [1]. These stents are promising in that they reduce the risk of thrombosis, one of the drawbacks of their first generation counterparts. Clinical trials have demonstrated that everolimus reduces the risk of repeat revascularization, heart attack, and stent thrombosis compared to paclitaxel and sirolimus eluting stents [1]. Compared with paclitaxel, zotarolimus reduces the risk of myocardial infraction [1].

Zotarolimus is a derivative of sirolimus. Medtronic has developed the Endeavor zotarolimus-eluting stent, which is constructed from cobalt-chrome, coated with phorlycholine, and elutes the drug over 2 weeks [10]. Clinical trials have demonstrated a reduced risk of thrombosis of 0.5%, however it has not yet been proven that the zotarolimus eluting stent is superior to first generation DES's with regards to safety [21]

Everolimus is similar to sirolimus, but is more lipophilic and therefore able to diffuse more rapidly into the arterial wall. Evrolimus-eluting stents constructed from L605 cobalt-chromium and coated with poly-n-butyl methacrylate are manufactured by Abbott Laboratories and Promus [22]. The Xience prime is available in sizes of 2.25 - 4.0 mm and up to 38 mm long. These stents exhibit superior long term safety traits in comaprison to Paclitaxel-eluting stents , including reduced thrombosis, myocardial infraction, and revascularization [23].

Fully resorbable biodegradable stents (BRS) have entered clinical trials, and the first implantation of the poly-L-lactic acid Igaki-Tamai BRS in a human has been performed [1,30]. Preclinical evaluation of the Abbott everolimus eluting ABSORB stent is currently underway [30]. However, it it yet to be determined if these devices can meet or exceed the safety and efficacy of available stents [1].