A medical apparatus used in angioplasty for the repair of blocked, collapsed and torn arteries. Stents serve as support structures inside of a choked artery, or a blood vessel that has degraded.[1]

In the last century, Coronary Heart Disease (CHD, or Coronary Artery Disease (CAD)) has become the #1 killer of adult men and women in the United States.[2] CHD occurs over many years, and produces almost no symptoms until the disease has progressed to an advanced stage.[3] When someone has CHD, their arteries slowly build up formations of cholesterol that are called plaque.[3] This build up is relatively harmless early on, but over time can become large enough to block the flow of blood in the arteries. CHD is often associated with atherosclerosis, which is also characterized by the build up of plaque inside arteries. Atherosclerosis can cause further build up which will result in hardening of the arteries.[4]

Almost no symptoms will manifest until the disease has progressed significantly. The first major sign will be what is called "Angina", which is a pain or discomfort in the chest area. It has been known to feel like pressure or indigestion, and can also be felt in the arms, back, and even in the jaw.[2] Shortness of breath will usually be coupled with angina, and this is due to a lack of oxygen rich blood being pumped by the heart.[3] These symptoms, however, can potentially culminate in a heart attack. The heart attack will occur if the artery has become blocked to a point where the blood flow is almost completely obstructed.[2][3]

The stent is a relatively new medical device, first being implemented about 30 years ago. The procedure of opening a closed artery is called an angioplasty, and the concept has been around for thousands of years.

400 B.C. - The heart is studied using catheters made from reeds and metal pipes.

1711 - A horse heart is catheterized using brass pipes, a glass tube and the trachea of a goose.

1958 - The diagnostic coronary angiogram is conceived by Dr. Mason Sones.

1964 - Dr. Charles Dotter introduces the concept of Transluminal Angioplasty, or the remodeling of the artery.

1974 - The first human balloon angioplasty is performed by Andreas Gruentzig.

1977 - The first Percutaneous Transluminal Coronary Angioplasty is performed on an awake patient by Gruentzig in Zurich.

1986 - First Stents are implemented in France by Jacques Puel and Ulrich Sigwart.

1994 - The stent is approved by the FDA for use in the United States.

The Process of Stenting 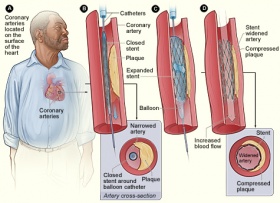 Placement of a stent occurs during a procedure called angioplasty. The doctors use a special x-ray machine that uses fluoroscopy to convert the x-ray images into a video feed. The x-ray picks up on a contrast dye that is put into the circulatory system. The video allows the doctors to determine the area of blockage by the contrast dye and watch in real time as the procedure progresses.[6]

A small incision is made on a main artery, preferably on the thigh, arm or neck. A small catheter is inserted in this incision. The catheter is guided by a thin wire, of which some have directional capabilities. The stent is placed on a small balloon that is on the tip of the catheter. Once the balloon has reached the area of the blockage, it is inflated to expand the artery and the stent. The balloon is then deflated and the catheter is removed. The stent remains to support the artery and the procedure is complete. The patient is awake during this procedure, but does receive local anesthetic to numb the area of incision.[6]

Traditional Stents are made of metal, and are not coated with anything. These were the first stents that were implanted. Though there has been much success using bare metal stents, the body does not recognize the metal and this can cause an immune system response. Being recognized as a foreign object is the primary reason that Thrombosis and Restenosis occur (see Complications section).[1]

Fabric Stents are mainly used for stenting the aortic artery since it is so large. The use of fabric is to encourage the structural integrity of the artery, and also to prevent blood from flowing through tears and making them larger.[1]

Drug Eluting Stents are the traditional bare metal stents, but are coated in a material that can be loaded with drugs. Biodegradable materials such as polymers have been used to elute anti-platelet and anti-inflammatory drugs over time. The concept is to use a stent that will not elicit such a harsh immune response from the body and the cell lining of the blood vessel. Success has been seen using this type of stent, though it has been claimed that they are not compatible with everyone.[1][7]

Cell-Seeded Stents are also bare metal stents that have been coated in some sort of material, but these are seeded with live cells. This is the most recent development in the field of stenting. Cell-Seeded stents are being targeted to try and combat cellular responses, and also to help regenerate areas of blood vessels that have been degraded over time. These cell-seeded stents are thought to better mimic the biological structure of the artery, and therefore will be better received by the body.[7][8]

Two major complications have been observed after the angioplasty and stent implantation.

Thrombosis is a condition when the cell lining of the blood vessel becomes inflamed during the initial procedure. This will elicit a response from the body targeting the area where the angioplasty occurred. The response from the body sends platelets and Fibrin to fix whatever damage might have been done. Instead of this, the platelets and Fibrin will coat the stent and could potentially cause a blood clot in the area, which will block the blood flow. This will require a second angioplasty or stenting.[10]

Restenosis is a secondary condition to Thrombosis. After the bloodborne response from the body, a cellular response is elicited in the affected area. This occurs in the form of cellular proliferation and growth. This problem manifests as new tissue growing in and around the stent, which can progress to a point where the new tissue blocks the artery. This will also require a second angioplasty or stenting.[11]

It should be noted that recent advances in drug eluting stents are targeting these two complications.