Spider Silk as a Biomaterial by Ruoting Wang 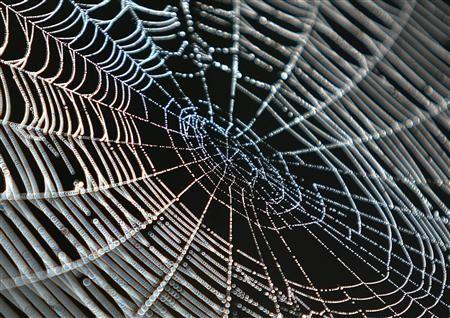 Silk has been used for centuries, from clothing to suturing and wound healing. The strength and structure of silk have fascinated scientists and others alike. In addition, silk is bioinert as well as biocompatible, making it a good biomaterial. Silkworm cocoons have been gathered to harvest their silk in the past, since silk worms have been easy to domesticate. Spiders, on the other hand, are difficult to breed in large numbers due to their territorial nature. In addition, silkworms have been known to generate significantly more silk compared to spiders, roughly 600 to 900 meters per silkworm cocoon compared to 137 meters per spider gland, making it more efficient to harvest silkworm silk [8] [19]. Each type of silk contains the protein fibroin, which contains repetitive sequences of alanine, glycine, and serine that make up crystalline β-sheet structures. β-sheet structures contain large sections of hydrophobic domain with smaller hydrophilic portions that allow tight stacking of the sheets with both hydrogen bonding from the glycine side and Van der Waals forces from the methyl groups on the alanine side [17] [19]. This crystalline structure allows for the strong tensile strength of the silk, as well as giving it hydrophobic properties to resist water [19] [20].

Spider silks have been known to exhibit a greater ultimate tensile strength (UTS), thermal stability, and comparable elasticity to silkworm silk, but spider silk varies in these properties over a large range due to functional differences in each type of silk. For example, the molecular weights of spider silk can range from 70 to 7000 kDa, which is indicative that the primary amino acid sequencing or environmental factors in silk synthesis are responsible. In addition there are also eight different types of spider silks characterized, compared to only the one of silkworm silk. This large range of spider silk types and properties also makes characterizing spider silk difficult [3] [4] [5] [21].

There have been a plethora of applications of spider silk in research. While initially used primarily as a suturing, the research into silk have allowed it to be used for many more applications. Fibroin has been transformed into film, sponge, hydrogel, fiber, and non-woven mat form. These have been applied to wound dressing and bone, cartilage, ligament, and tendon tissue engineering, in addition to connective tissue and endothelial applications [21]. Spider silk builds on the applications of silkworm silk with greater strength properties. However, there are still challenges that need to be met due to the limiting factor of spider silk production for practicable purposes. 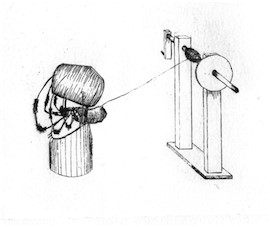 Wilder’s first machine, which utilized only one golden orb spider. These strands were too thin to weave. 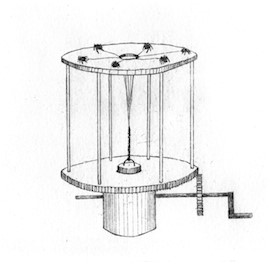 1639- English astronomer William Gascoigne found that a spider had weaved a web in his telescope, and he was able to clearly see the strands, but they did not obscure his vision of the night sky. Other silks tended to be too wide or obscured vision. [11]

1710- Monsieur Bon publishes “A Discourse upon the Usefulness of the Silk of Spiders”, documenting the usefulness of spider silk along with various properties known at the time, such as wound healing. [18]

1863- American Union Army surgeon from the 55th Massachusetts regiment named Dr. Burt Green Wilder collected the Nephila, or golden orb spider, on Folly Island. Wilder created one machine then updated it to weave the silk together into a thicker strand. The second machine had issues due to spiders eating each other. [10]

1970- Since World War II, not much was explored in spider silk, until the Work, Gosline, and Tillinghast groups described the mechanical properties of spider silk, which caused the revival of interest in spider silk as a biomaterial. [8]

1977- Optical properties and elasticity of spider silk are explored by Robert W. Work. [13]

1999- Gosline publishes paper on the amino acid sequence of spider silk to its function. [2]

Artificial spider silks have been created in recent years, but the ability to create spidroin that mimics the material properties of its hosts have been difficult in the past. Due to the denaturing that occurs in most synthetic spider silk processes, the resulting fibers that are formed have lackluster mechanical properties compared to silk created in a gland. The major ampullate gland, the most studied gland in the spider, can be seen in Figure 1. Zone’s A and B are responsible for spidroin synthesis, while zone C is responsible for regulation of the properties of the silk. These long and winding trails allow for the formation of the silk and the dehydration of the fiber as it is processed through each gland. In Figure 1b. the blue represents the part of the gland that synthesizes spidroin, and green represents the part of the gland in which the pH is continuously lowered. The green region in Figure 1b. contains carbonic anhydrase, which catalyzes the reversible reaction of carbon dioxide and water to form bicarbonate. Carbonic anhydrase is essential to decreasing the pH of the system, as can be seen in Figure 1c. [14] [22]. There are two non-repetitive domains, the N-terminal and C-terminal domains, which are named NTs and CTs. These terminal domains are responsible for the solubility and structure of the spidroin. CT is a disulfide linked homodimer that links spidroins in an oxidizing environment. As the silk travels through the regions, it destabilizes in the low pH and loses its helical structure to form β-sheets. On the N terminus region, the NT dimerizes at a pH lower than 6.4, and fully stabilizes at a pH of 5.7. This is perhaps the reason why spider silk undergoes such a transformation to fully stabilize. Despite the knowledge about the composition of spider silks, full length spider silks have yet to be synthesized [23]. 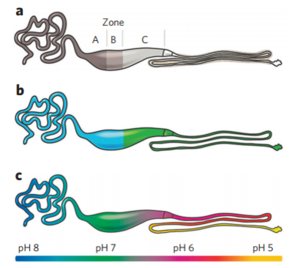 Figure 1. The ampullate gland of the spider. Source 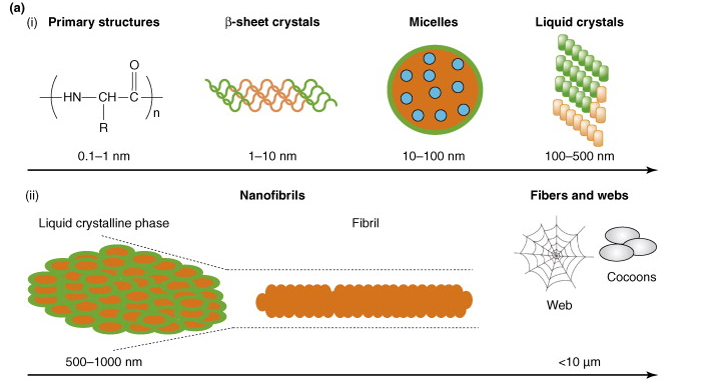 Figure 2. The structures of spider silk into many different compositions. Source

The benefits of spider silk is retained in its structure, which gives it a crystalline but elastic properties. The primary structure of ampullate spidroin fall under two structures, MaSp1 and MaSp2. While silkworm silk comprises of alanine, glycine, and serine, spidroin sequences generally contain only glycine-alanine sequences. Alanine is highly hydrophobic, while glycine is hydrophilic and forms strong hydrogen bonds. The result of this structure is seen in Figure 2, with the β-sheet secondary structure forming micelles that contain small droplets of water inside (blue). The green outer layer is the highly hydrophobic portion of the micelle, and the more abundant part of it. As more proteins begin to build, they form together tightly and pack into liquid crystalline structures. Environmental factors, such as shear stress and pH can affect the packing of these structures to form the fibrils of spidroin [2] [19].

Fracture surgeries have been increasing in the past decade, with an 164% increase of procedures from 2000 to 2012. In addition, the mortality rate of high impact fractures is 12%, indicating that there needs to be more work done to improve the quality of fracture fixation materials. In the past, metallic fixation devices were the ideal devices used to fix fracture fixation issues. Fracture fixation is the process of implantation of a material to aid in the process of healing bones. The main issue with metallic fixation devices is their lack of stress shielding, which is removal of stress via implant that causes a decrease in bone density. Resorbable materials do not require removal, and therefore they avoid this problem of stress shielding. Materials such as PGA (polyglycolic acid) and PLGA (poly-lactic-co-glycolic acid) have been studied and used, but have shown to cause inflammation and infection in the sinuses of the bones in which they have been implanted. In addition, PGA and PLGA have lower strength and stiffness, which makes them useful only for limited applications. On the other hand, silk materials can withstand heat up to 170 degrees C and can be sterilized via autoclave. In this study, silk blanks were created and molded into screws to implant into a rat femur. With a roughly 51.2% β-sheet content, the silk screws were able to have a similar shear force to PLGA screws. Swelling tests were completed to show that within 8 minutes of implantation, the material does not swell. Swelling often causes loss of mechanical properties, and thus makes the material less viable. Absorption of the screw occurred after roughly 4 to 8 weeks after implantation. It seems as though silk made materials could be made beyond fracture fixation methods. The high viscosity of silk solutions makes molding a difficult task, which may make any implants made of silk protein difficult to create. This could present a future problem for silk based materials [15].

Silicone has been used in medical applications since the mid-20th century. With the advent of silicone implants, there became an issue of inflammation and the formation of a fibrous capsule. This fibrous capsule causes a patho-physiologic reaction, which modern medicine still cannot heal. Periprosthetic capsular fibrosis, which is a complication that can occur after breast implant surgery, causes tissue deformation and extreme pain in patients. In this study, silicone was coated with silk created from the European garden spider, Araneus diadematus, has been used to make the spider protein eADF4 (C16). This protein was coated with a thickness of 900 nm onto the silicone implant and the surface architecture and indirect markers of capsule formation were analyzed. Tests showed that fibroblast proliferation, the main marker for fibrous capsule formation, decreased with a silk coat. This was due to the smoother surface of the silk layer compared to the silicone layer. The implants were implanted and removed from Sprague-Dawley rats after 12 months, and examined to show whether fibroblast formation had occurred. In the samples with a silk layer, there was residue of a silk on the explants. In the samples without the silk layer, there was periprosthetic tissue in addition to collagen fibers from histology. The study checked for inflammatory markers of CD4- and CD8-, as well as IL-6 and TNF-α and showed a significant 1.6 to 3 fold increase in these markers. The study also checked for makers of extracellular matrix remodeling, which occurs after tissue damage occurs. It found that the markers for synthesis of collagen I to collagen III differed significantly between the control group (no silk) and test group (silk layer). Collagen I to collagen III is one of the processes involved in remodeling the extracellular matrix during tissue injury. This research offers possible new technologies and future work that could be involved in spider silk formation [16].