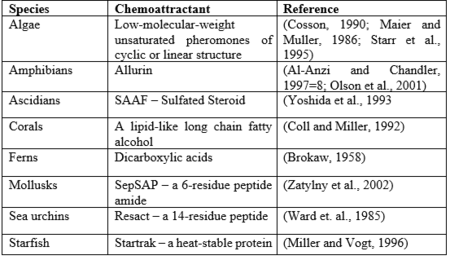 The chemotaxis of sperm toward eggs is a phenomenon that occurs in many species such as plants and mammals, and plays an important role in fertilization.1 In plants and other non-mammals, it has been proven that spermatozoa, the mature motile male sex cells, migrate towards factors secreted by the egg and is a well documented phenomenon (factors shown in Figure 1).2 However, little is known about the mechanisms, if any, that drive mammalian sperm cell migration toward the egg. Currently, many patients who are unable to conceive naturally undergo fertility treatment. The physiological conditions of the female reproductive tract may adversely affect sperm’s ability to locate and travel to an egg, offering an explanation to certain cases of infertility. By better understanding the mechanism of sperm motility, basic questions regarding the physiology of reproduction can be answered, leading to improved treatment of patients. A previous study determined that P. esculenta sperm required Na+ for motility.6 The absence of Ca+, Mg2+, or K+ also greatly inhibited sperm motility. However, the effects of these ions on mammalian sperm velocity and motility requires additional research.

Mammalian sperm are unable to fertilize eggs immediately after ejaculation.3,4 They gain the ability to fertilize eggs after residing in the female tract for a finite period of time. Physiological changes that occur in the female reproductive tract render the sperm capable of fertilization, a phenomenon known as sperm capacitation. For instance, a low concentration of Ca+2 greatly reduces the rate of fertilization.5 In addition to this, environmental chemical gradients affect a sperm’s velocity and travel direction2. The effect of chemical gradients on cell motility is known as chemotaxis, and it plays a vital role in fertilization. However, chemotaxis in sperm has been primarily studied in aquatic invertebrate species, and remains poorly understood in mammals. It was once believed that sperm traveled unguided in the female tract because 250 million sperm are present in an average ejaculation, and only a single sperm must reach the ovum for fertilization. However, as few as one in a million sperm will reach the fallopian tubes, and therefore unguided sperm travel would be highly improbable. A mature ovum will release chemoattractants that diffuse in its surrounding environment resulting in a high concentration close to the egg and a lower concentration as distance increases. Sperm generally exhibit hyperactive motility when exposed to high concentrations. Chemoattractants greatly vary between species, but can include hormones, ions, and peptides.

Figure 2: Simple figure displaying the fundamental idea behind chemotaxis. Here, a cell is shown to be preferentially migrating up a chemical gradient. Depending on the cell, it is also possible that it would migrate down this gradient, or downstream.

Generally, the movement of a cell or organism in a direction corresponding to a gradient of increasing or decreasing concentration of a particular substance is known as chemotaxis. In the context of mammalian sperm cell migration, it has been hypothesized that specific chemicals such as calcium ions and progesterone are responsible for chemotactically directing the migration of sperm cells toward the egg.1 A fundamental depiction on how chemotaxis works is shown in Figure 2.

Developmental processes are the most well studied in A. punctulata.7 In this species, a chemoattractant peptide activates a guanylyl cyclase in the flagella, upregulating synthesis of 3’,5’-cyclic guanosine monophosphate, known as cGMP. cGMP then activates K+ selective cyclic nucleotide gated KCNG channels which creates a moment of membrane hyperpolarization.8 Voltage dependent Ca2+ channels are activated during hyperpolarization and open during subsequent depolarization. This is signalled by the depolarization of cyclic nucleotide-gated HCN channels.9 The resulting Ca2+ dynamics regulate the flagellar beat and control the trajectory of sperm in a chemoattractant gradient. However, the molecular mechanism is still poorly understood and varies between species. The putative mechanism of chemotaxis is shown in Figure 3.

Figure 3: Model of chemotactic signaling events in A. punctulata.

Source-Sink Assays function by generating a concentrated chemical gradient at the source, which diminishes at a constant rate until it reaches the sink.10 In an idealized situation, the source is infinite and the sink perfectly absorbing. There is usually an initial transient phase of instability but then a constant gradient forms. Experiments can only be performed during times when the chemical gradient is constant. The timescale that this gradient forms over can be described by the following equation:

The gradient is able to retain its shape as long as the concentration difference between the sink and source is close to its initial value. The difference is described by exponential decay, and the rate is inversely proportional to the reservoirs’ volumes:

Veff is the effective volume of the source and sink. The decay time can be described using the following equation: 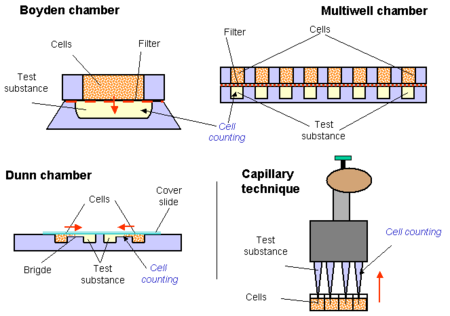 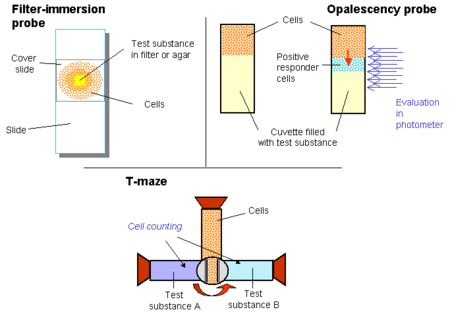 The boyden chamber is the simplest two-chamber technique used in measuring chemotaxis.12 It involves two medium filled chambers with cells added to the top chamber and the chemoattractant to the bottom. The two chambers are separated by a porous membrane. Care must be taken to ensure that the pores are an appropriate size for the desired cell type. After a standard incubation time, the chambers are fixed to halt membrane passage, and stained. The number of cells that have passed the membrane can then be counted using microscopy to quantify the level of chemotaxis.

This technique can be performed using several assays simultaneously in a multiwell chamber. This allows different chemoattractant concentrations to be measured and directly compared at once.

The Dunn Chemotaxis Chamber is the most commonly used bridge chamber.13 These involve an inner well where cells are deposited, and an outer well where the chemoattractant is added. There is a 20 micron bridge between these two wells that allows diffusion to create a linear concentration gradient. The migration of cells over the bridge can be monitored via light microscopy.

This test is very similar to the other two-chamber techniques. However, there is no membrane present between the cells and the test substance.14 A capillary, often a pipet, with the test substance is inserted on the surface of the chamber and chemotaxis of the cells can be measured by counting the cells that have moved into the chamber. Multi-well chambers can be used with multi-channel pipet to create assays that can test for various chemicals. 15

Using a microfluidic device for these experiments is beneficial because it helps capture a more realistic environment in which to study the chemotaxis of the sperm. The sizes of fallopian tubes can range from 7 to 12 cm. in length, but the diameter of tube is normally less than 1 cm. Therefore, it makes sense that this kind of assay would be performed on a device that is relatively of the same scale. While the channel sizes for our device are definitely much smaller than that of the correct anatomical structure, the use of a microscale device will facilitate more accurate results than say an assay that is much larger than that of anatomical structures. Furthermore, it is unlikely that larger models would be able to efficiently capture what we are trying to assess. The gradients in larger devices would take longer to diffuse, and it would potentially take longer for sperm to detect. In a microfluidic assay, the gradients will form rather quickly, and it should take no time at all for the sperm to detect the gradients and to migrate more quickly. 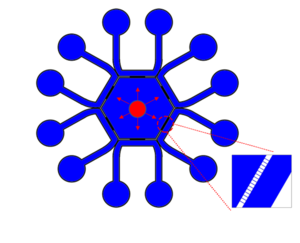 Figure 7: Top down view of the device.11 Sperm will be seeded onto the center of the assay (red circle), while six chemical gradients will flow through the outlying channels. For each U-shaped channel, the left port is the inlet and the right is the corresponding outlet.

The device we will be using in our studies is very similar to that designed by Yi Zhang et al. in their research into spermatozoa Chemotaxis. 11 This device, measuring 35 mm by 35 mm consists of a central hexagonal reservoir for the sperm. This reservoir is connected to each of the horseshoe shaped chemical channels by 14 micro-channels, each measuring 10 um wide and 2 um tall. The six chemical channels have inlet and outlet ports at the circular ends, which add and remove the analyte of interest into the system; these channels are 700 um wide and 50 um tall.

The primary difficulty from this type of study is generating a constant chemical gradient. Because diffusion occurs relatively quickly, constant flow must be generated. To ensure that a standard gradient is produced, the flow rate must be very precise, because even a small change can alter the gradient affect the results.