Purpose of this weeks joural is to continue the steps required to finish the week 10 assignment. This inclucded further research if necessary into our projects and then the formation of a powerpoint for presentation.

1. The first step was to reselect the subjects for out experiment.

2. Next I performed a multiple sequences alignment with all subjects clones from first and last visits. This data was then analyzed to find a pattern in the amino acid changes.

4. We then reanalyzed a box shade graph to count the number of amino acid mutations that were present in all these subject. The results showed several more mutations than previously because the previously counted mutations were off of virus sequences that were not complete.

5. The next step was to perform a cluster alignment of all the sequences we are using to show the difference between each subject's first and last visit.

The distances were recorded for each subject.

6. Then a region of mutational clustering was found and connections and ideas as to why this region contains so many mutations was formulated.

7. Cytokines were researched and a conclusion was drawn. 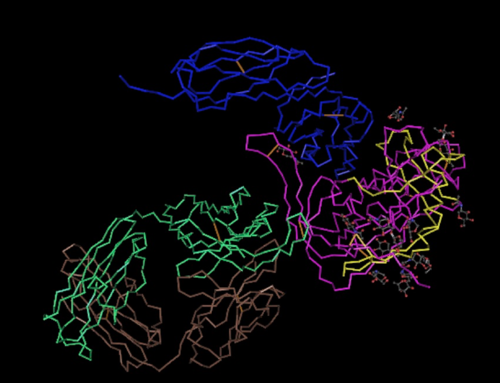 This structure was used to generate the Markham sequences to be compared to experimental subject sequences for comparison. 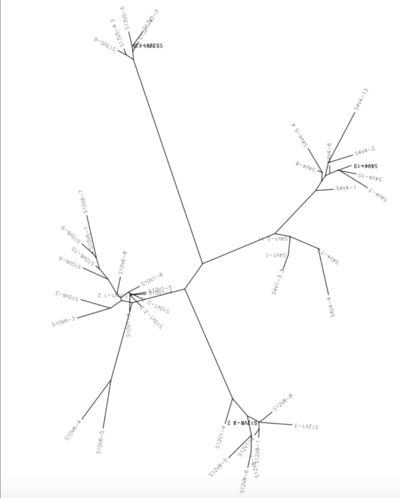 After analyzing the amino acid changes for each subject's first and last visits, there was no observable pattern in the changes of amino acids. In other words, there was no common observable pattern of change of an amino acid in a subject's first visit sample compared to his last visit. There were observable mutations that occurs, but it did not appear that there was any connection (i.e unpolar--> polar or charged-->unpolar) between them.
Not all subject had amino acid changes comparing from first visit sample to last.
30% of all aa mutations were found to be polar to hydrophobic or hydrophobic to hydrophobic

Greater than 50% of mutations were found in region from amino acid 38 to 42.

Week 11 Cont. The amino acid region from 38-42 was found to have the highest number of mutations. This region is also present in the V3 loop area which is were polar cytokine receptor molecules attach. This led us to believe that this region is meant to be the variable region for cytokine attachment. Which is why there are so many mutations in this area, because the virus would need to mutate most frequently here in order to avoid detection by the body's autoimmune response. Additionally, the rapid progressor viruses would have the most amount of mutations because they would need to adapt and mutate the most often to avoid the autoimmune response. Thus, these viruses are going to have the greatest amount of mutations.

I would like to thank Dr. Dahlquist for her help on this research project as well as Courtney Merriam's.While I worked with the people noted above, this individual journal entry was completed by me and not copied from another source.