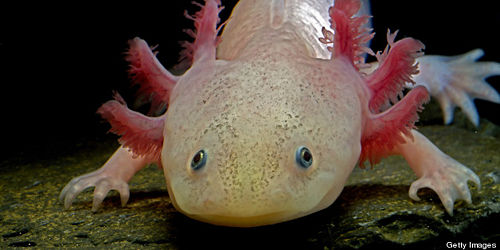 Salamanders, such as the axolotl, are commonly studied for limb regeneration research.

1954 - The effect of denervation (loss of nerve supply) on limb regeneration in post-metamorphic frogs and salamanders are studied and investigated. [8]

1972 - Epidermal-mesodermal interactions are studied, specifically during morphogenesis of the limb regeneration. Proximo-distal organization during of new limb during regeneration is found to be a product of this interaction and compared to embryonic generation. [6]

1994 - Salamander limb regeneration is determined to rely on specific extracellular matrix components for necessary release of cells that contribute to blastemal formation. [13]

Salamander limb regeneration is something that humans have long studied and envied since it was observed. The ability to regenerate entire limbs and organs is one of great interest as well as great rarity, only being seen in select organisms including newts, lizards, starfish, and of course salamanders.

Regeneration and Wound Healing in Salamanders and Newts

Unlike most other creatures, salamanders and newts, known as urodele amphibians, have the ability to regenerate whole limbs, like arms, legs, and tails. This is quite special, for the regeneration of whole limbs means entails a very complicated process in order to replace multiple types of tissues, including skin, muscles, blood vessels, and even nerves. While this information is generally known, what isn’t is how the limbs are actually able to regenerate, as well as the many factors that go into the process.

As stated before, the actual limb regeneration process is one that is not well understood and is still being researched and defined. Currently, the process is defined as follows (See picture below for visualization):

The general process of limb regeneration as seen in a salamander after amputation/loss of a limb: A.) Formation of wound epithelial after amputation. B.) Nerve growth beneath wound site. C.) Formation of the apical epithelial cap from wound and nerve interactions. D.) Apical epithelial cap signals surrounding cells to dedifferentiate and form blastema cells. E.) Blastema progenitor cells accumulate beneath wound epithelium; the two communicate positional information to accurately regenerate the lost limb. (Source 1)

2. At injury site, basal keratinocytes from the local epidermis migrate towards the center of the wound, forming what is called a wound epithelium [1].

3. Beneath the surface of the wound, nerve fibers begin to grow into the newly formed wound epithelium [1].

4. Interactions between the wound epithelium and the nerve endings form the apical epithelial cap signaling center [1].

6. Blastema cells congregate underneath the wound epithelial and communicate positional information to grow new cells to fill the positional gap left by the injury [1].

7. Cell proliferation continues from the blastema, forming new and varied tissues from dedifferentiated cells until the cellular positional disparity is all corrected and replace [1].

Though the idea of limb regeneration and replacement may seem simple, the controlling factors that go into making the whole process work is complicated and still not fully understood. As described in the regeneration process, the growth of nerves plays an important role. When the nerves grow into the stump of an amputated limb, it interacts with wound epithelium to induce dedifferentiation of the once mature limb cells [1, 2]. Removal or stunted growth of the nerves causes incomplete, malformed, or even no limb regeneration, as seen in past studies [8]. It has also been studied that macrophages, a type of white blood cell in charge of consuming waste and other undesired objects, may play a role in limb regeneration [16]. 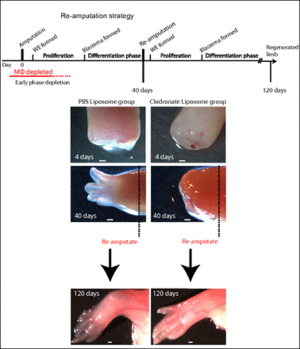 In this study, salamanders were treated to remove some or all of the macrophages in their systems; the salamanders with some macrophages removed underwent limb regeneration at a much slower rate, and the ones with no macrophages experienced no regeneration [16]. The intermediate cells that grow in to fill in the missing positional information gaps are thought to be organized and coordinated by neighboring cells, which release factors for dedifferentiated cells to become redifferentiated in conjunction with positional memory of which cells should go where [4].

The possibilities for limb regeneration in terms of actually generating new limbs may seem limitless, however, being a complex process, there are several requirements and specifications that must be met. The implantation of a blastema into any tissue won’t necessarily result in growth or integration [1]. The most basic way for cell tissues to integrate is to graft cells with other cells with the same positional information, for instance, grafting blastemas into the same local region of the limb from which it was removed. The cells have the same, or at least similar enough, positional information for them to integrate together [1], which is thought to be regulated by cell adhesion molecules in a property known as selective adhesion [1]. Now, if one is to take a blastema from one region of the limb and graft it onto a different region of the same limb, then integration may only occur if the positional gap is filled in between the graft and the host, a process called intercalation [1]. By this it is meant that cell growth will occur, generating new cells with the missing positional information to satisfy the two tissues integrating together. If a blastema graft is placed onto a different region of the body, then the difference in positional information may be enough to cause no integration into the host site at all [1, 3]. The differences in positional information are too great to trigger an intercalary response [1]. Lastly, just as nerve growth is required for proper blastema formation and then limb regeneration, the integration of a blastema into a host tissue requires that the host environment be able to communicate their individual positional identity [1, 5]. Otherwise, no intercalary response would be triggered and cells would not integrate into one another. 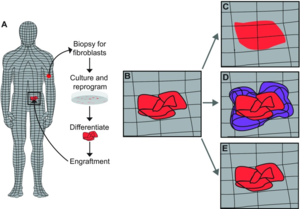 The engraftment of tissue in (B) could result in three different outcomes: C.)Positional information of host and graft cells align and successfully integrate together. D.) Positional discontinuity results in ectopic cell growth via intercalation and function isn't restored in host tissues. E.) Graft tissue cells don't align with host cells due to differing positional information and there is no integration.

Motivation for Salamander Limb Regeneration and Use in Tissue Engineering

It can be easily seen how the ability to regenerate one’s limbs and organs is a desirable trait, and if fully understood, would play a huge role in tissue engineering. Humans today do not hold the capabilities to regenerate entire limbs or organs, with the caveat of being able to regenerate the liver. The human liver can be divided for donation purposes, and the original donor may regenerate their liver after time and to a lesser size. If this regeneration ability could somehow be replicated or induced in other organs and amputation sites, then the possibilities for medical advancement and wound healing would be greatly accelerated.

As discussed in the limitations of limb regeneration section, grafting blastemas for induced tissue regeneration is something that has been highly researched into. The dedifferentiation experienced by cells at the blastema site is something that researchers are very interested in, as they function akin to induced pluripotent stem cells [1, 2]. The difference here is that induced pluripotent stem cells (iPSC's) are often derived from connective tissue cells, called fibroblasts; these fibroblasts are easy to attain as well as form patient-specialized cell lines [1]. With that said, these iPSC’s can contain positional memories, even after formation, and if used as a graft, can affect and alter the expression of local molecules in the surrounding cell, especially if its positional information differs greatly from the host site [1].

Just as studying limb regeneration could lead to greater tissue grafts, understanding the rapid and accurate way in which salamanders can recover from internal and external injuries could lead to advancements in wound healing. Tissue regeneration involves more just replacing limbs, but also replacing and fixing internal organs. Humans can’t regenerate several different cell types, including brain cells, cardiomyocytes, and inner ear hair cells, so an obvious interest in research would be to find a way to replenish these cells if they become dead or diseased. Through studying the way in which salamanders’ dedifferentiated cells can become redifferentiated and integrated with such accuracy, it has been purposed that perhaps this could be applied here. The use iPSC's to solve this problem have been tested when trying to reestablish synaptic connections in regenerated neurons. When and if the cells generate into the desired differentiated cell type, in this case neurons, there may still exist the problem that connections with the host cells at the graft site are not specific enough to continue appropriate patterns for normal function [1].

As mentioned with iPSC's, there exist similar side effects when looking into using tissue grafts with dedifferentiated cells for wound healing and tissue regeneration. The possibility still exists that the graft cells contain position information that it will then use to make undesirable changes at the site of engraftment [1]. The contrary may also be noted, for the graft cells may receive local signals and differentiate into undesirable cells [1]. The possibility of greatly different position memories between graft and host cells may also lead to the formation of aberrant structures from an intercalary response, producing a teratoma or inducing ectopic growth [1]. Research has gone into finding ways in which to mute the communication of position information and thus prevent any unwanted interactions from occurring. This would potentially be done by using retinoic acid at the site of engraftment. One study showed that by using retinoic acid at the sites of amputation on salamanders with a non-local blastema graft, the graft cells were able to be reprogrammed of their positional information and integrate exactly with the host cells [17].

Looking into ways in which the salamander limb regeneration can be applied to humans is a topic of great interest. In order to one day make this possible, much of current research has and does go into still trying to fully understand the intricate way in which all the cells in the blastema communicate, express, and induce cell proliferation, dedifferentiation, replication, rediffernetiation, and coordination. Most of the research involves work with salamanders, experimenting to discover new factors that influence the regeneration process, like lysosomal acid phosphate mediating the dedifferentiation process [7]. Godwin et al. [7] have conducted research into the apparent effect that macrophages have on limb regeneration, as discussed previously. Their work discusses that it may be possible to induce a regeneration-permissive environment by identifying and using therapeutic molecules, derived from macrophages [16]. Other researchers have looked into understanding the genes that come into play with salamander limb regeneration, with the hopes that perhaps there lay dormant genes in humans, that if expressed, could produce limb regeneration capabilities akin to the salamander [9, 11].

8. Singer, M., & Kamrin, RP. (1954). The influence of denervation on induction of limb regeneration by hypertonic salt solutions in the postmetamorphic frog, including some observations on denervated salt-treated salamander limbs. Anatomical Record, 120, 700-701.