We did initial PCR/PCA today!

Set up two solutions for PCR:

This one I call A in construction file:

This one is B:

I set up a solution based on the PCA protocol on open wet ware.

Ran two lanes on agarose gel for gel purification of products A and B from last time. Extracted the product A from the gel. The lane

for B was very faint so I have decided to redo the gel one more time before considering whether it was a mistake in an earlier step :( 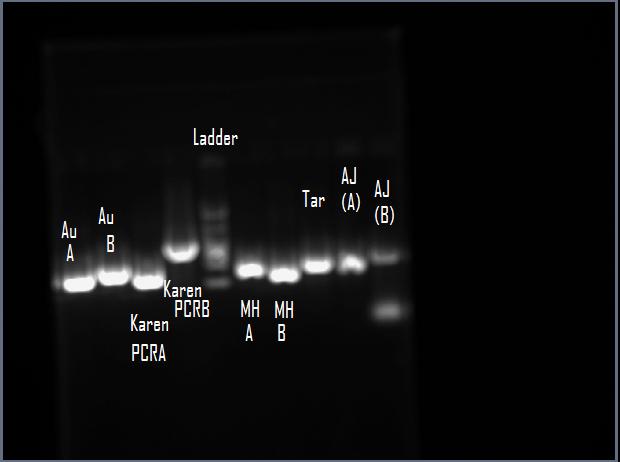 Created the PCA solution for creation of pca2.

For next time: I will rerun the gels (PCR A&B with loading buffer), extract Create the digests for the part and template and use thermocycler (time for ligation ?)

Possibly with time remaining, I will set up the pcr reaction with A+B

For the sbb1216 part, I ran the two PCR products from last week on the agarose gel for gel purification:

Obtained alright results, can be seen on the gel two lanes 8 and 9. The bands (brightest ones) look to be about the right size. 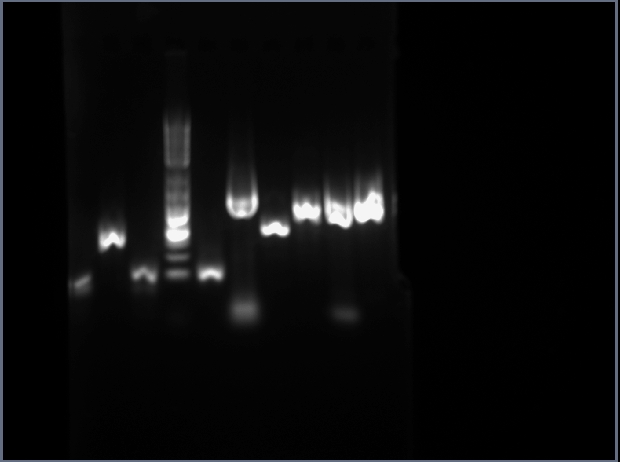 Cut out the bands and did the rest of the gel purification for both A and B.

I had the pca2 product from last week, which I ran on gel for analysis (lane 4 ?) looks alright.

Digest of Wobble Products for the size considerations. Kept the digest on 37 degrees on the thermocycler for ~1 hour. Finally did a

region as part of the Soeing PCR process

Also attempted a transformation but underestimated the time requirement

Ligated the PCA2 digest with NheI/BamHI with the Bca1834 vector digest NheI/BamHI.

Allowed the Ligate product to incubate for 30 minutes on benchtop.

Went through the protocol for transformation with 200 micro liters of cells.

35 minutes versus 1 hour after heat shock.

Zach picked the colonies over the weekend and had them growing in tubes when we arrived today. He picked 4 colonies (white, the red

colonies indicates failure of transformation and there were some red colonies). Only one of my colonies out of 4 grew. I did miniprep

procedure to isolate the plasmid DNA from this colony of cells using the protocol listed in open wet ware. The extracted DNA has

been saved in a tube (eluted with water to a total volume of 50 micro liter). Now I need to digest and run an analytical gel before

deciding whether or not to sequence.

I also picked three more colonies from the plate to grow overnight to see if I have any success growing more, see if more of them

For the other part I am working on (sbb1216) I got back the pcr product for the A+B pcr reaction with end oligos. Ran it on gel,

results will determine whether I can digest, ligate, etc.

None of the picked colonies grew :(

So I have only one colony to work with which was miniprepped last time. Today I am running a digest of it to do an analytical gel analysis.

The analysis shows no bands on the gel lane (lane 7): 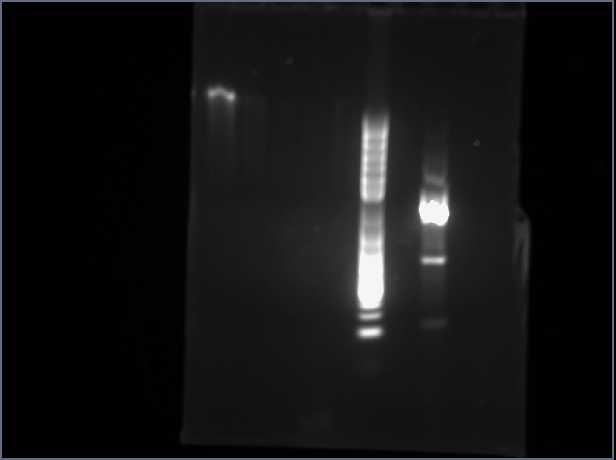 This is strange because there was no DNA present, which I think indicates a failure in the miniprep step. However, the transformation step was rushed, so I will go back and do another ligation/transformation. 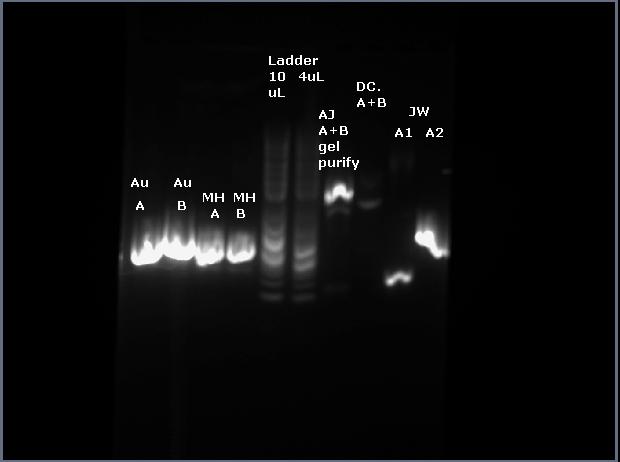 The cell cultures picked from the last plating grew(4 colonies).

Did miniprep purification of the DNA from the 4 cell cultures. Hopefully there are no mistakes in this step and I have good plasmid DNA

in the 50 microliter eluted with water. One possible area of mistake is that I forgot to discard the PB buffer at the bottom of the

I also ran the A+B soeing PCR product on gel and cut out the band (see Gel 2 lane 1).

Did a zymo cleanup of the A+B gel purified product and eluted with 50 microliter of water. The cleaned up product A+B was digested with

EcoRI and BamHi and incubated on the thermocycler for one hour. Then it is run on the gel for cutting it out. Will cut out if there is

enough time, otherwise will have to repeat the digestion and gel running step the next time. I can still check to see whether the

bands are the right size.

Also redid the analytical gel for the 4 miniprep products from the isolated colonies from last time. The last gel(analytical) did not

I only used 1 microliter today). If the bands turn out okay,

sequencing. Otherwise, I will try picking other colonies and see if they grow, then miniprep if there is time.

Last time, the gel for the A+B digest turned up nothing. I am reasoning that the A+B pcr product band I cut out from the gel (gel

ran the digest and ran it through the gel again. (see lane 8, nothing!) 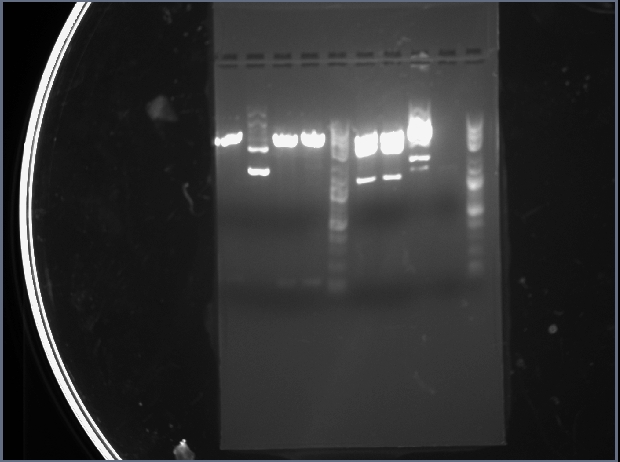 I am also running out of A+B pcr product, so I decided to save what I have (need to run it on gel and cut out) and run soeing PCR one

last time on the A and B pcrpdt to create A+B pcr product again.

The miniprep product's (for the Leucine Zipper parts) analytical gel turned out alright however. I was expecting a 3.5 kb template and

a 126 bp part bands on the gel when I cut with NheI/BamHI. Colonies 1,3,4 look approximately to be the correct band sizes on the

gel(see above gel lane 1,2,3,4 corresponding to respective colonies). The 3.5 kb band is rather thick and could be much larger but this

the plasmid) I gave these to be sequenced (only supposed to give 2 max, accidentally gave 3 now of the same part but different

colonies!) and input into clotho as part sbb1205.

Got the third A+B soeing PCR product. Ran on gel. Size seems to be about right. Cut out the band and kept it in ADB buffer for next 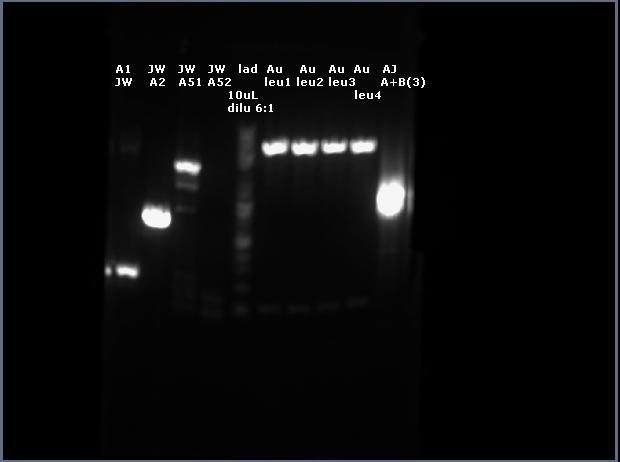