The PCR procedure is as follows: 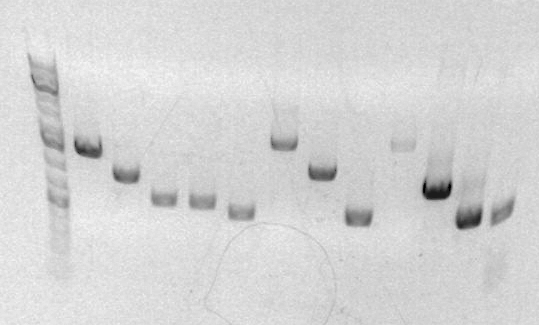 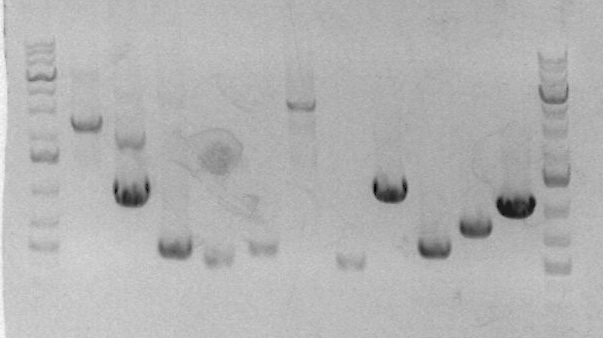 Analytical gel for TN looked good, so proceeded to zymo clean up.

-Stored TN elution in Box A

Fk0002/0004 was shown to be a larger size than expected. I repeated the PCR with and with out DMSO. Hopefully, I will get the desired product.

First I prepped the FK0002/0004 with and without DMSO samples for the preparative gel. I then proceeded to prep my TN0001/0002R for the digestion by adding 8.5uL of eluted PCR product to 1uL of NEB Buffer 2 and lastly adding the enzyme 0.5uL BglII. I incubated the samples at 37 degrees for an hour on the thermocycler.

After incubation, I Prepped the BglII digested TN1/2R for a preparative gel. The band looked good, so I proceeded to cut the DNA from the gel and melt it in ADB buffer.

Today, I prepped the TN1/2R for and EIPCR ligation and transformation.

For the EIPCR ligation I added the following together in a tube and pounded it on the bench top to mix.

I then placed it in the 37 degree incubator for 30min.

After 30 minutes, I placed the ligation mixture on ice and began transformation.

I first added 50uL of water and 30ul of KCM to a thawed 200uL aliquot of cells. I then added 70uL of this mixture to my ligation and placed it on ice for 10 minutes. I heat shocked the cells for 90 seconds at 42 degrees and placed it back on the ice for 1 minute. Next, I added 100uL of 2YT, being careful to use a flame to keep things sterile, and let the whole mixture shake in the incubator for an hour.

Because I had class at 4PM, Will and Mike plated the bacteria for me.

Today, I miniprepped TN1/2R. After finishing, I continued to prep FK 1/3 2/4 for analytical gel.

The sbb21 (FK 1/3 2/4) product is expected to have a band at ~600bp. The product is in lane 14 and looks approximately at 600bp. Therefore the product is good. I will continue with zymo clean up and proceed with anEcoI/BamHI digestion next week.

First, I prepared the TN1/2R for mapping. During 30min incubation, I proceeded to zymo the ssb21 PCR product. I accidentally eluted the DNA into the A4 buffer waste. Professor Anderson saved the product by repeating the zymo cleanup and eluting with less water to account for DNA that was lost in the process. I then ran a preparative gel on the sample and a band appeared at ~600 as expected. I cut the DNA out of the gel, melted it at 55 degrees, and stored it away to zymo gel purify next week. 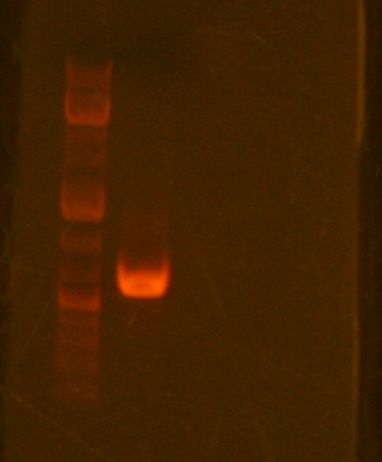 After the incubation for TN1/2R, I proceeded to run an analytical gel for all four clones. The results are as follows, where lane 5,6,7,8 correspond to clones 1,2,3,4 respectively. 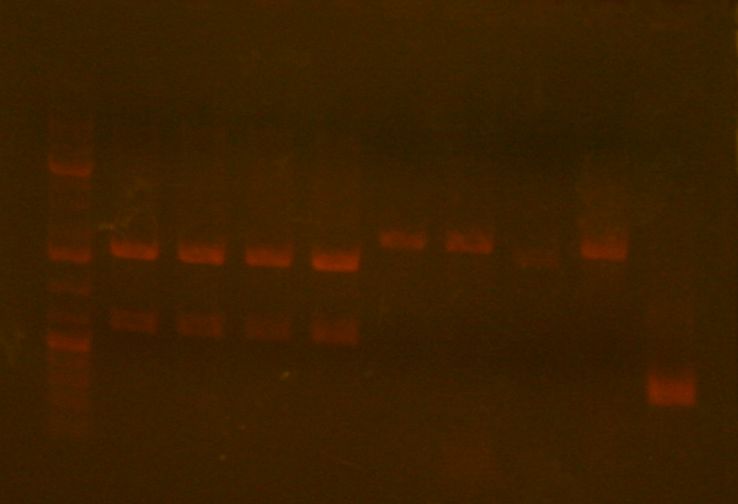 I can see that clone 3 differs from the others, therefore it may possibly be bad. To be on the safer side, I chose clone 1 and 2 for sequencing.

I entered clone 1 and 2 for TN1/2R into clotho to get them ready for sequencing.

After finishing that I zymo gel purified sbb21 and proceeded to do ligation and transformation.

Transformation failed for sbb21 from last week. Mistakenly, I used the wrong vector plasmid. The one I chose wasn't treated with the proper restriction enzymes. This explains the failed transformation.

I redid ligation and transformation for sbb21.

During the incubation period, I checked the sequencing for sbb08. Everything matched up. The part is perfect.

The transformation was successful; however, accidentally no colonies were picked. Will is going to pick colonies today and will continue the mini prep.

Will miniprepped and mapped the clones for sbb23. The results of the gel are as follows: 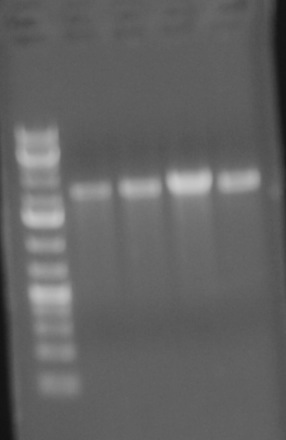 The size of the digestion should have been around 600bps; however, the gel shows bands at ~3000-4000bps. Clearly the bands are much longer than they should be. Professor Anderson believes something definitely went wrong and suggested we scrap this part and not bother sequencing it. He is going to make a new one from another version of the part that was successful during the break.

We begin our group project to verify that our parts work. Our procedures and details of the work we did can be found in the team notebook below.