If possible, make two circularly permutated ompG proteins. One with the backbone opening in loop 2 (aa 59-60) and one in loop 6 (somewhere within aa 220-231) where the residues of the mature protein are not visible in electron density maps, presumably because they are disordered.

Did zymo clean up of PCR products (small fragment and regular clean up where appropriate). Diluted some clean ups in to much water so i either redid the PCR or added more template for the A+B reactions. Did PCR A+B of M10007 (694bp) and M10009 (703bp). BUT THESE DIDNT WORK BECAUSE I FORGOT TO DO GEL PURIFICATION TO GET RID OF TEMPLATE DNA. 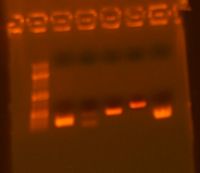 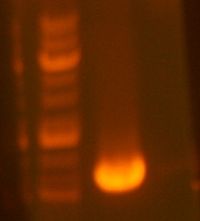 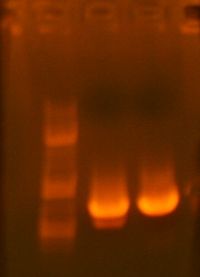 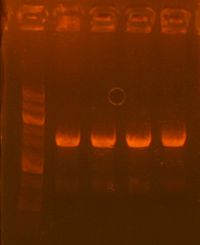 Started the Cell-cell adhesion assay. Transformed pBjb1600-Bca1144 (RFP) into DH10B cells. Plated on Spec plates. These cells will eventually be co-transformed with the IILK and AG4 plasmids to test cell density at the end of our experiments.
We are also doing a round of clones without the RFP plasmids, but we did not transform any DH10B cells with plasmids because we are hoping that other groups will have extra colonies.

The RFP cells were also transformed with our plasmids of interest.

Did OD measurements of colonies grown in 96 well plate (see David's page).
V-bottom plate was difficult to ascertain results from. A4 and A7 do not have pellets of ecoli at the bottom, and A8's pellet is very small. Everything else looks the same (big pellet).

Diluted colonies (man 19-26 and Bca1363), 100uL into 1mL of media. Did two replicates of each colony, one with arabinose and one without.

Tried to take OD measurements with sodium hydroxide add as control to reverse flocculation. Realized that sodium hydroxide kills cells and does not disrupt leucine zipper. Tried to find trypsin without dye. Couldnt find it.

Diluted colonies (2 replicates each) with and without arabinose, as stated in "cell-cell adhesion" protocol.

Diluted two replicates of each clone into 96 well plate. One replicate with, one without arabinose.

Took OD measurements of every sample. Saw some clumping, OD measurements coincided with clumping observations. Data will be typed up tomorrow for Cell-cell adhesion write up in the registry.