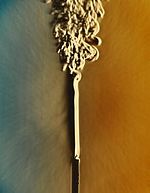 Figure 1 The plume from this candle flame goes from laminar to turbulent. If the correct fluid properties are known, the Reynolds number can be calculated to predict where the Laminar-to-Turbulent transition occurs9.

The Reynolds number is a dimensionless quantity in fluid mechanics that is used to help predict flow patterns in different fluid flow situations. The Reynolds Number serves as a guide to the laminar-turbulent transition in a particular flow situation,1 and for the scaling of similar but different-sized flow situations. The Reynolds number is often used to predict the velocity at which a certain fluid flow turns turbulent, while it can also be used to determine what state of flow the fluid in question is currently under. Calculation of the Reynolds number depends heavily on what type of fluid is being utilized, as well as through what type of channel (i.e. pipe flow, duct, open channel, etc.) this fluid is travelling. Figure 1 is a good example of a fluid experiencing all three types of flows: laminar at the bottom, transitional near the middle of the stream (if only very briefly), and turbulent flow towards the top.

The concept was first introduced in 1851 by George Gabriel Stokes,2 however it was named by Arnold Sommerfield in 19083 after Osborne Reynolds, who popularized its use in 1883.4

The Reynolds Number is defined as the ratio of inertial forces to viscous forces in a flowing fluid. It is used in many fluid flow correlations and is used to describe the boundaries of fluid flow regimes (laminar, transitional and turbulent).1 Viscous force is what tends to keep the layers moving smoothly. When these forces are sufficiently high, this removes any disturbances from the flow and we see what we call laminar flow. However, as velocity increases, inertia forces increase and particles are pushed out of the smoother path. This causes disturbances within the flow, and will eventually lead to what we call turbulent flow.11 Determining whether a flow is experiencing laminar or turbulent flow is quite simple. Reynold's number tells us everything we need to know about the behavior of a given flow scenario.

Reynolds number is determined via the following equation:

You will sometimes see Reynolds number in a simplified version such as this:

The Reynolds Number can be used to determine if flow is laminar, transient or turbulent.5 The flow is

Reynolds number can tell us the behavior of the flow we are analyzing. Each flow phase corresponds with a specific range of Reynolds numbers. The flow types can be broken down into the following three branches:

Laminar flow is the flow that corresponds with low velocities and Reynolds numbers less than 2300.5 In this type of flow, the fluid flows in parallel layers, with no disruption between the layers.7 At low enough velocities, the fluid will tend to flow without lateral mixing, while adjacent layers simply slide past one another. This can be especially important in microfluidics when you do not want lateral mixing. These phenomenon are displayed well by the streamlines depicted in the laminar flow case of Figure 2. Note that the flow is very clean and without disturbance. Furthermore, laminar flow is entirely reversible. This means that we can always return to almost exactly where we began when the flow started. The following video expertly displays this phenomenon (skip ahead to 20 seconds): 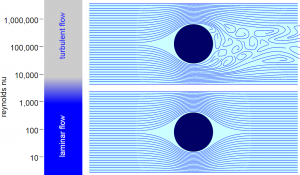 Figure 2 Spheres in both Laminar (bottom) and Turbulent (top) flow. The sphere subjected to laminar flow does not display flow separation, mixing, or eddies. The sphere in turbulent flow experiences flow separation and eddy formation behind the sphere.8

Transitional or transient flow is the phase of flow that occurs between laminar and turbulent flow, and corresponds to Reynolds numbers that land between 2300 and 40005. In this type of flow, there is a mixture of laminar and turbulent flows present. As Reynolds number increase from 2300 to ~4000, there are an increasing amount of disturbances appearing within the flow.

Turbulent flow is the most common form of flow in nature, and corresponds to the Reynolds numbers higher than a value of 40005. Turbulent flow is ultimately described as chaotic and unpredictable, and is often seen with fluids at high velocities. The flow undergoes irregular fluctuations, or mixing, and continuously changes magnitude and direction6. As can be seen from figure 2, the sphere in the upper portion of the figure has steady streamlines in front of it, but severe eddy (vortex) formation behind it. Since turbulent flow is extremely hard to measure compared to laminar flow, experimental tools such as a hot wire probe10 must be used in order to obtain good results. A hot wire probe is a device that has a very fast response time, with a probe that can respond to temperature changes within 1 millisecond, which makes this tool a good candidate for measuring flows (such as air) that experience constant, rapid change as we see in turbulent flow.

Calculation of the Reynolds number for a given fluid depends on several things such as speed, density, and viscosity. Two of these are properties of the fluid itself and are usually pretty easy to look up. Speed is often a given, or is one of the things you are trying to solve for if initially given a Reynolds number. However, the characteristic length is something that changes based upon what the fluid is flowing through. The following sections will describe how calculation of characteristic length changes, and will show the equations to use in each of these situations.

Let's say you have water flowing through a pipe with a diameter of 25 millimeters at a speed of 5 meters per second. If we take a look at the equation for Reynolds number defined above, we simply need to replace to the characteristic length term with a D, which denotes the diameter of the pipe. The equation then looks as such:

For this specific scenario, the equation with the aforementioned values plugged in becomes:

This is laminar flow based on the previously defined boundaries. To create turbulent flow, the velocity or diameter of the pipe would have to be increased. Increasing either would easily force the flow to approach turbulence.

You can imagine a duct as either a square or rectangular structure through which the fluid is flowing. For this, the calculation of Reynolds number changes slightly due to the fact that we use something called the hydraulic diameter is the characteristic length.5 The hydraulic diameter, [math]\displaystyle{ D_h }[/math], is defined by the following equation5:

While the U term may be somewhat confusing because it is not simply just perimeter, wetted perimeter just means the cross-sectional perimeter that is in contact with the acting fluid. For a square, this U term becomes [math]\displaystyle{ 2*(a+b) }[/math]

Therefore, our original equation for Reynold's number takes the following form when were are dealing with a rectangular duct:

An open channel or duct behaves similarly to the previously mentioned closed duct. The only thing that changes in this case is the wetted perimeter. The following problem explores the small difference between open and closed ducts: 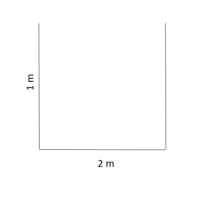 The perfect example of an open duct that transports a fluid is an aqueduct, which was used to transport water for various reasons. Imagine we have an aqueduct with the dimensions shown in Figure 3 and we want to calculate the Reynold's number for water flowing at 25 meters per second.

The hydraulic diameter for this case is simply:

Therefore, the flow within this duct is fully-developed turbulent flow. 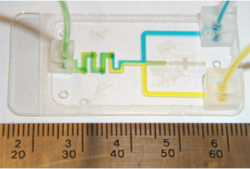 Figure 4: Laminar flow within a microfluidic device. Notice how the colors being by flowing next to each other without mixing. This is characteristic of microfluidic flow. Since Reynolds numbers stay extremely low at this scale, mixing is minimal even though the fluid exiting is green (mix of blue and yellow). Photo credit: Department of Electrical and Computer Engineering, University of Wisconsin, Madison.13

As far as Reynold's number and microfluidics is concerned, flow is almost always laminar. Meaning that almost without exception, microfluidics experience extremely small Reynolds numbers. The reasons the Reynolds numbers are kept so low is a result of low velocities and small channel sizes. Typical velocities range from 1 micrometer per second up to 1 centimeter per second, while channel radii ranges from 1-100 micrometers.12 Constrained by these dimensions, the Reynolds number lands safely within the laminar regime, the viscous forces almost dominate over the inertial forces, resulting in smooth, laminar flow.

Figure 5: Diagram of the aorta. The point of interest being the ascending aorta which is located just before the aortic arch.15

Hemodynamics is a word specifically used to address blood flow within the human body.14 When considering how Reynolds number works in the body, we must first address a few important things about flow within the body. When dealing with the circulatory system, the following key differences must be addressed:14

Calculating Reynolds number can only be done locally, and is not representative of the flow everywhere in the body at that time. For this application, one would treat arteries like pipes. Further measurements may be necessary to attain flow velocity. With that being said, blood flow in the body is generally laminar, with the exception usually occurring in the ascending aorta where this flow can be disrupted and turn turbulent.15 The location of the ascending aorta can be seen in Figure 5. This turbulent flow can also occur in large arteries at branch points as well as across stenotic heart valves. Ideally, the critical Reynolds number is high enough such that turbulent flow is not common in the circulatory system. Turbulent blood flow within the circulatory system is never a good thing, with turbulent flow being linked to heart murmurs15 and aneurysm formation at arterial branch points.16