Regeneron is a New York based pharmaceutical company founded in 1988 by Leonard Schleifer, M.D., Ph.D. The company was initially focused on the development and use of neurotrophic factors and their capacity for regenerative healing, but officially hit the market in 2008 when the FDA approved ARCALYST (rilonacept) for treatment of auto-inflammatory diseases. Regeneron quickly took off as a growing business with its first $1 million raised upon its inception by Merrill Lynch Venture Capital, Inc. and the company's capacity to attract leading scientists such as Drs. Alfred Gilman and Eric Shooter. The company currently focuses on antibody derived drugs for the treatment of a wide variety of diseases, with four drugs in phase three clinical trials.

1990: Regeneron establishes itself among the scientific community by publishing a paper in Science on the cloning of a novel neurotrophic factor, earning the spot as the most highly cited neurobiology paper of the year. Collaborations begin with Amgen to develop brain-derived neurotrophic factor (BDNF) and neurotrophin-3 (NT-3), subsequently launching the "Orphan Receptor" program devised to identify unknown growth factors.

1991: Regeneron opens in the stock market under the handle REGN, with the Initial Public Offering (IPO) raising $91.6 million.

1999: CNTF begins clinical development for the treatment of obesity under the name AXOKINE.

2006: Regneron branches into the function of antibody derived drugs with its first fully-human antibody designed to target IL-6R which held promise for the treatment of multiple myeloma, prostate cancer, and autoimmune disease.

2008: ARCALYST earns FDA approval for the treatment of cryopyrin-associated periodic syndromes (CAPs), a family of autoinflammatory diseases, working as an interleukin 1 inhibitor.

2011: Aflibercept is filed under the name EYLEA for FDA approval and enters the market 9 months from filing while the IL-6R antibody pushes into phase 3 development.

2012: FDA approves ZALTRAP (ziv-aflibercept) as a treatment for metastatic colorectal cancer while EYLEA earns a secondary indication for treatment of macular edema. 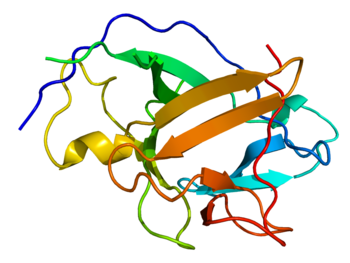 ARCALYST represents Regeneron's breakthrough into the market of biopharmaceuticals once it earned FDA approval in 2008 for the treatment of Cryopyrin-Associated Periodic Syndromes (CAPs), a family of auto-inflammatory diseases that includes Familial Cold Auto-inflammatory Syndrome (FCAS) and Muckle-Wells Syndrome (MWS). ARCALYST functions as an Interleukin-1 inhibitor as it consists of the ligand binding domains for human IL-1 receptor. Interleukin-1 is the primary activator of the body's inflammatory response and is activated by macrophages to illicit an immune response [1]. Regeneron has also worked closely with physicians in developing Regeneron ARC (ARCALYST Resource Center) to assist doctors in properly diagnosing and treating auto-inflammatory diseases. ARCALYST is rated by Forbes Magazine as the number 6 most expensive drug in the US, costing $250,000 annually [2].

EYLEA first entered into clinical trials in 2001 for the purpose of treating cancer by acting as a vascular endothelial growth factor (VEGF) trap. The mechanism by which this worked was for the drug to bind circulating VEGF-a and -b and inhibit the growth of new blood vessel growth, which would essentially starve out tumors relying on progressive angiogenesis. In 2003, Aventis signed on with Regeneron to develop EYLEA in the field of cancer, and the drug found a specialization in treating proliferative eye diseases. One such disease, wet macular degeneration, causes blindness as abnormal blood vessels grow in the choriocapillaris leading to blood and protein leakage below the macula [3]. EYLEA functions as a recombinant fusion protein consisting of human derived VEGF binding domains that are fused to the human IgG1 immunoglobin, which allows it to preferentially bind circulating VEGF [3]. EYLEA earned approval from the FDA in 2011 for treatment of wet macular degeneration, but subsequently failed an important goal in Phase III trials for treating metastatic non-small cell lung cancer in March of the same year. In April of 2011, EYLEA entered Phase III trials for treatment of both metastatic colorectal cancer and metastatic prostate cancer. Following these trials, the FDA approved a recombinant version of aflibercept fused with 5-fluorouracil, marketed as ZALTRAP (ziv-aflibercept) for the treatment of metastatic colorectal cancer. 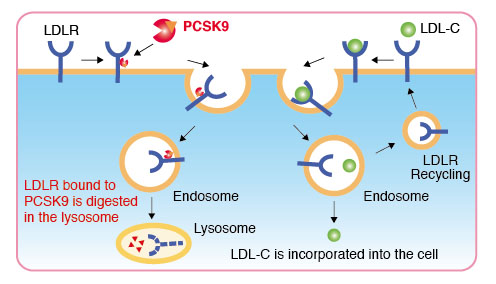 PRALUENT is one of Regeneron's first forrays into the world of antibody medicine and was approved by the FDA in 2015 to treat high cholesterol that was not well managed by diet or statin treatment. Alirocumab, a monoclonal antibody, functions as a Proprotein convertase subtilisin/kexin type 9 (PCSK9) inhibitor. PCSK9 binds to the low density lipoprotein (LDL) receptor which is responsible for taking cholesterol out of circulation. Once PCSK9 binds to the receptor, the receptor is degraded and cholesterol is allowed to circulate. By having PRALUENT inhibit PCSK9, the receptor is kept intact and can better mediate the presence of cholesterol in the body. PRALUENT was initially developed with the idea of treating familial hypercholesterolaemia from which research pointed to PCSK9 as a primary target for therapy [4]. The method of producing alirocumab is through the use of Chinese hamster ovary cells transfected with recombinant DNA [5]. Currently, PRALUENT is listed to sell for $14,600, which while high compares well to the cost of the alternative treatment of apheresis priced at $96,000 per year [6]

[4] Stephen S. Hall for Nature News. April 9, 2013 Genetics: A gene of rare effect. A mutation that gives people rock-bottom cholesterol levels has led geneticists to what could be the next blockbuster heart drug.