R is a free software for statistical analysis and graphics.
It runs on various UNIX platforms, Windows, and MacOS.
The latest version, 2.12.1, was released on December 16, 2010.
Since 1997 an international core team of about 15 people develops R. 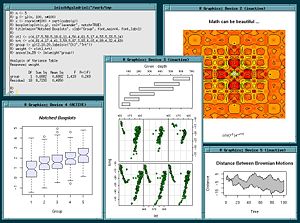 screenshot of R running on Unix

R is widely used for statistical software development and data analysis, and has become a de-facto standard among statisticians for the development of statistical software. R's source code is freely available under the GNU General Public License, and pre-compiled binary versions are provided for Microsoft Windows, Mac OS X, and several Linux and other Unix-like operating systems. R uses a command line interface, though several graphical user interfaces are available. wikipedia entry on R

"R has many functions for statistical analyses and graphics; the latter are visualized immediately in their own window and can be saved in various formats (jpg, png, bmp, ps, pdf, emf, pictex, xfig; the available formats may depend on the operating system). The results from a statistical analysis are displayed on the screen, some intermediate results (P-values, regression coefficients, residuals,...) can be saved, written in a file, or used in subsequent analyses.

The R language allows the user, for instance, to program loops to successively analyse several data sets. It is also possible to combine in a single program different statistical functions to perform more complex analyses. The R users may benefit from a large number of programs written for S and available on the internet, most of these programs can be used directly with R.

At first, R could seem too complex for a non-specialist. This may not be true actually. In fact, a prominent feature of R is its flexibility."

R was originally created by Ross Ihaka and Robert Gentleman (hence the name R) at the University of Auckland, New Zealand, and is now developed by the R Development Core Team. R is considered by its developers to be an implementation of the S programming language, with semantics derived from Scheme.

To use R you will have to learn some R commands (see screenshot), i.e. it's not fully menu based like most Windows and Mac software. This might seem tedious but you will soon realise that while slowing you down initially it will speed up your work and make it better after an initial learning period.

There is a lot of free documentation available. Shorter manuals are first in the list:

You can find the complete listings on the R project webpage: manuals, contributed manuals.